In the early 1900s hunters were blessed with economical access to thousands of surplus, military Krag-Jorgensen rifles manufactured at Springfield Armory.  This resulted from the army’s replacement of the Krag by the 1903 Springfield, an arm which offered a stronger action and a more powerful cartridge.  You might argue about strength, but Krags were very well built, entirely of heavy-duty machined steel parts, except for the stocks, of course.  When you find one today, it is likely that nothing on it is broken, and this quality could be had long ago at a very low price, sometimes less than $2.00 apiece.

The .30-caliber cartridge used by the Krag has been called various names over the years, but we will simply call it the .30-40 Krag, an indication that it worked with about 40 grains of smokeless powder.  In assessing the effectiveness of this round it is well first of all to consider the .30-30 Winchester, which has enjoyed phenomenal success as a hunting round for deer and black bear for over 100 years.  Published data for a factory .30-30 with 170-grain bullet show a muzzle velocity of 2200 fps and a muzzle energy of 1827 ft-lbs.  The corresponding figures for the .30-40 with 180-grain bullet are 2430 fps for velocity and 2360 ft-lbs of energy.  Quite a difference, but what counts is what is delivered down range.  At 200 yards, the ,30-30 170-grainer retains 1619 fps in velocity and 989 ft-lbs in energy, while the .30-40 retains 2007 fps and 1610 ft-lbs in velocity and energy, respectively.  The .30-40 arrives at target range, therefore, with over 60% more energy than the .30-30.  The reason for this large difference is due to the .30-30’s lower initial velocity and also to the ballistic inefficiency of the flat-nosed .30-30 bullet, which must be used to prevent ignition in the tubular magazines of lever-action repeaters.  The .30-40 suffers no such restriction so factory loads use a more efficient spire point bullet. The round has enough power for most American big game hunting.  I should mention that the new Hornady LEVERevolution .30-30 ammo uses a pointed, plastic-tipped bullet, coupled with a more efficient powder, and that significantly improves downrange performance but it still falls a bit short of the .30-40.

A carbine style Springfield Krag makes a pretty nice-handling rifle as is, and many of the long military Krags were shortened and fitted with carbine stocks before sale to the public.  The Division of Civilian Marksmanship did this in producing the famous DCM Krag, and several private firms did so also, in some cases producing arms of poor quality.

There is also a tradition of “sporterizing” surplus military rifles, accomplished by barrel work, fitting of appropriate stocks, better sights, scope bases, trigger work, refinishing, etc., etc., and a good military sporter can be a fine rifle indeed.  A number of respected sporting arms houses, with names such as Sedgley, and Griffin and Howe did this kind of work, and they were joined by lesser gunsmiths and also by amateurs whose talent ranged from good to abysmal.  There were plenty of Krags to feed this kind of passion.  It should be noted that this sporterizing seldom involved rebarreling or rechambering to a different caliber because it is very difficult to get the Krag magazine to work with a cartridge other than the .30-40.  No problem here because the Krag action, while quite adequate for factory .30-40 ammo, is not strong enough to handle modern, high-pressure cartridges.

Ruger No.3 at Top, Model 1896 Springfield Krag Sporter at Bottom.

white line spacers.  The barrel is 22” and carries a long ramp with a bead at the front.  The rear sight is a Williams aperture.  The metal work has all been refinished in a well-polished dark blue. All in all, it is a very attractive piece. Everything is in good condition and completely functional.  The trigger seems not to have had any work, the pull being stock military.  The bore has prominent lands and somewhat dark and lightly pitted grooves.  Great bores are uncommon on Krags, but this one has the look of being one that might shoot quite well. In summary, it is a good Krag with a fine stock and refinish job. 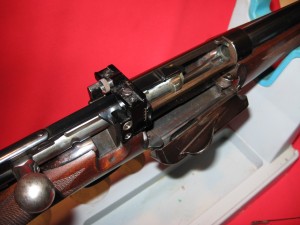 Very few other rifles have been offered for the .30-40 cartridge.  The Winchester Model 1895 lever action was a famous one. A notable example of fairly recent vintage is the Ruger No. 3, the carbine version of the famous Ruger No.1 falling block single shot (Also shown in the first picture).  The No. 1 has been offered in many popular chamberings and has enjoyed an avid following since its inception in 1966.  The No. 3 appeared in 1972, apparently in an attempt to offer a lighter, handier, and also less expensive version of the successful No. 1.  The action is the same, but the No.3 has a simpler operating lever than the No. 1.  Except for the .223 Remington, the chamberings of the No. 3 had a retro flavor and included the .22 Hornet, .30-40 Krag, .375 Winchester, .44 Magnum, and .45-70 Springfield.  I suppose its niche was that of “woods gun,” but I am not sure that folks understood what the No. 3 was all about.  It didn’t sell very well and was discontinued in 1987, a fifteen-year run.  The No. 1, on the other hand, continues in various configurations to the present day. 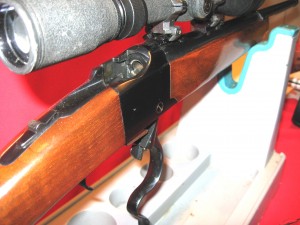 Ruger No. 3 with breech open.

The No. 3 in the pic has a 22-inch barrel, same as the Springfield Krag, and it carries the inscription “Made in the 200th year of American liberty.”  Ruger applied this inscription to all No. 3s made in 1976.  The buttstock and foreend are straight-grain walnut.  The buttplate and barrel ring are of a polymer material. Open sights were supplied with the rifle but the barrel is drilled and tapped for scope bases which are readily available and easily installed.  There is a shotgun style safety on the tang.  The barrel and metal parts are nicely finished and the fit is good, except for the buttplate, which has proud wood all around it.  Have I mentioned that the No. 3 was considerably less expensive than the No. 1?

So here we have two rifles in the same chambering, ready for comparison in “A Tale of Two Thirties.”

One of the things we should look at in each case is the method of holding the metal in the wood.  The following pic shows the Krag action removed from the stock, and you can see that it is held by three screws.  One is through the middle of the foreend into a threaded fitting dovetailed into the barrel, one is through the front of the 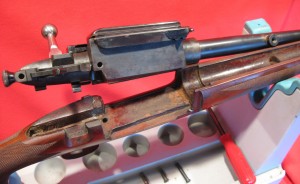 trigger guard into the flat bottom of the action, and one is through the rear of the trigger guard into the tang.  The large, flat bottom of the magazine gives the Krag action a very large bedding surface, and note also that the bedding areas for the rear of the action and the barrel in front of the recoil lug are large. These bedding areas, along with the screws fore, aft, and middle, give the Krag action an extremely secure connection to the wood and this, no doubt, contributes to the fine accuracy performance for which Krags have always been noted. 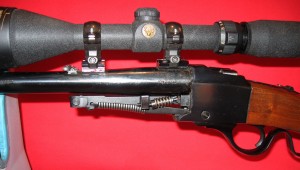 allows the forearm screw to draw the foreend snugly to the front of the action and means that the forearm is not anchored to the barrel. The picture shows that the bar also serves to anchor the mainspring (the larger) and the ejector spring of the rifle’s action.  Ruger’s design is unlike any other single shot, though it may bear some superficial resemblance to others.  It is an extremely strong action and will safely fire handloads loaded somewhat above the maximum level recommended for the Springfield Krag bolt-action rifle.

Handloading the Krag offers numerous possibilities.  Loading dies are readily available and the .30-40 case is relatively strong and presents no difficulties in reloading operations.  The larger case allows the use of more progressive powders than one might use in loading the .30-30, in fact, powders in the .30-06 class work well. For 180 grain and heavier bullets, I have used Winchester 760, IMR 4350, and IMR 4831. There are numerous other powders of similar burning rate which could be used, and, coupled with the enormous number of .30-caliber bullets available, the number of possible load combinations that one might enjoy trying becomes astronomical.

It is more difficult to attain factory-level velocities with Win 760, but it produces very accurate loads.  Using 42 grains with a Sierra 180-gr spitzer gave 2087 fps in the Springfield sporter and 2224 fps in the Ruger No.3.  I prefer to use IMR 4350 when trying to duplicate factory loads and it will nearly fill the case when producing 2400 fps. With certain load combinations, 2500 fps can be approached, but I see little need to try to exceed that.  If you need more than that for hunting applications, let me recommend the .30-06 or .300 Win Mag.

For evaluation of accuracy I followed my usual practice of firing four-shot groups at a distance of fifty yards.  I must say up front that this comparison is not fair. The Ruger No.3 is equipped with a Simmons Whitetail 4-12X scope while the Springfield Sporter has a Williams aperture rear with a bead front. However, using a peep target of the type I described in the article Precision with a Peep, the aperture sight really doesn’t give up all that much to the scope at 50 yards.   You can keep that in mind as we look at the results.

The first pic shows a group fired by the Ruger No. 3 with the Remington factory load; It measured .44 inch center-to-center. This sub-minute-of-angle group shows the accuracy potential of the No. 3 and also of the .30-40 cartridge, which gives up nothing to other .30 caliber cartridges.  This Ruger is a very good shooter and has had no accuracy tweaking, except to make sure that the buttstock, foreend, and 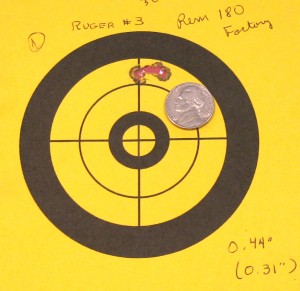 barrel band screws were good and tight. This rifle averaged .65” for four groups, two of Remington and two of Winchester, fired with factory loads. My handloads using W760 did not do quite as well.  Four groups using 180-gr bullets averaged .80” with .59” being the smallest of the four. I wish I could say that the Ruger test was a totally pleasant experience, but I can’t go quite that far. The light weight of the Ruger and its plain butt plate make for recoil that is quite stout and after 20 rounds or so starts to feel like punishment.  This rifle was offered in .45-70.  Wonder what that feels like.

The peep-sighted Springfield Sporter also did well in the accuracy department, but it had a tendency to present one flier in each four-shot group. Certainly that couldn’t be due to my shooting.  Well, maybe it could. At any rate this shows in the target pics 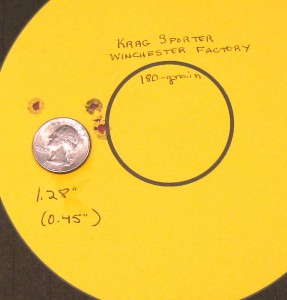 for the sporter, one with the Winchester factory load and one with the W760 handload.  Note that the best three for the factory load measure .45” and then .51” for the handload. Groups of four shot with factory loads averaged about 1.2”.  Four such groups fired with the handload averaged 1.09” for all four and .58” for the best three/four.  Not bad for an action and barrel that are 115 years old. The custom stock of the sporter handled recoil a bit better and so it was a bit more comfortable to shoot than the Ruger, although the difference was not great. 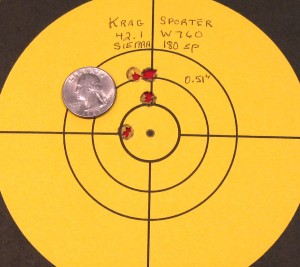 My conclusion is that the .30-40 cartridge is a good performer in the very few types of rifles made for it. There are a couple of others that I would like to try.  Some Winchester 1885 single shots were chambered for it, and then there is the Model 95 Winchester lever action.  I don’t know if I will every have the pleasure of the company of these arms so I will close by saying, if you like to shoot vintage thirties and would like to burn more powder and get kicked harder than your .30-30 affords, then go for the .30-40! The round will also reward you in deer country, and in the old days, many folks who knew where to place their bullets took elk and moose. Now that would be truly exciting.