Things That Get Lost: A Colt Police Positive .38 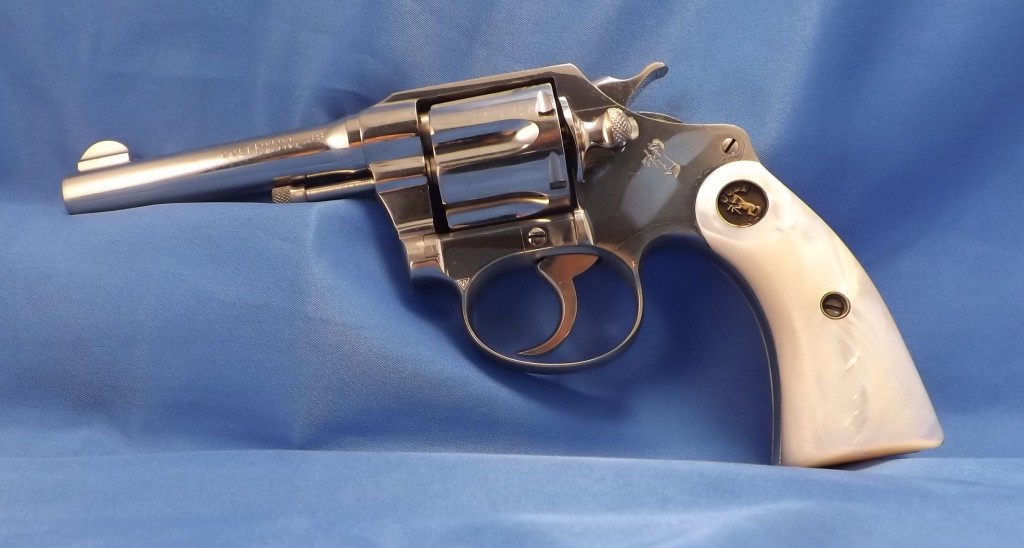 Encountering this revolver in the handgun case of a local gun shop was totally unexpected.  It is a Colt Police Positive, First Issue, in caliber .38, that is, .38 Colt New Police, which is Colt’s name for the identical .38 Smith & Wesson.  S&W brought this cartridge out about 1880 and it became very popular, but Colt decided to call it the Colt “.38 New Police” so they would not have to stamp “Smith & Wesson,” the name of their arch competitor, on their guns.”

Outstanding features of this revolver are its finish, factory nickel, and its factory mother-of-pearl grips.  The condition is mint!  It was manufactured in 1915 and, obviously, has seen very little use in the nearly 100 years of it existence.  Most interestingly, there is a name engraved on the right side of the frame.  More about that later.

The Colt Police Positive is a double-action revolver and is a successor to the Colt New Police Model that first appeared in 1896  Appearing in 1905, the Positive Model was fitted with an internal hammer block that improved the safety of the arm and that Colt referred to as the “positive lock.”  It was intended for the law enforcement market, hence the name “Police Positive.”  It was offered in .32 and .38 caliber, and a target model was also available in those calibers and .22 rimfire.  A very popular revolver, it was continued with several modifications until 1947 and an improved “Police Positive Special” was available until 1973. 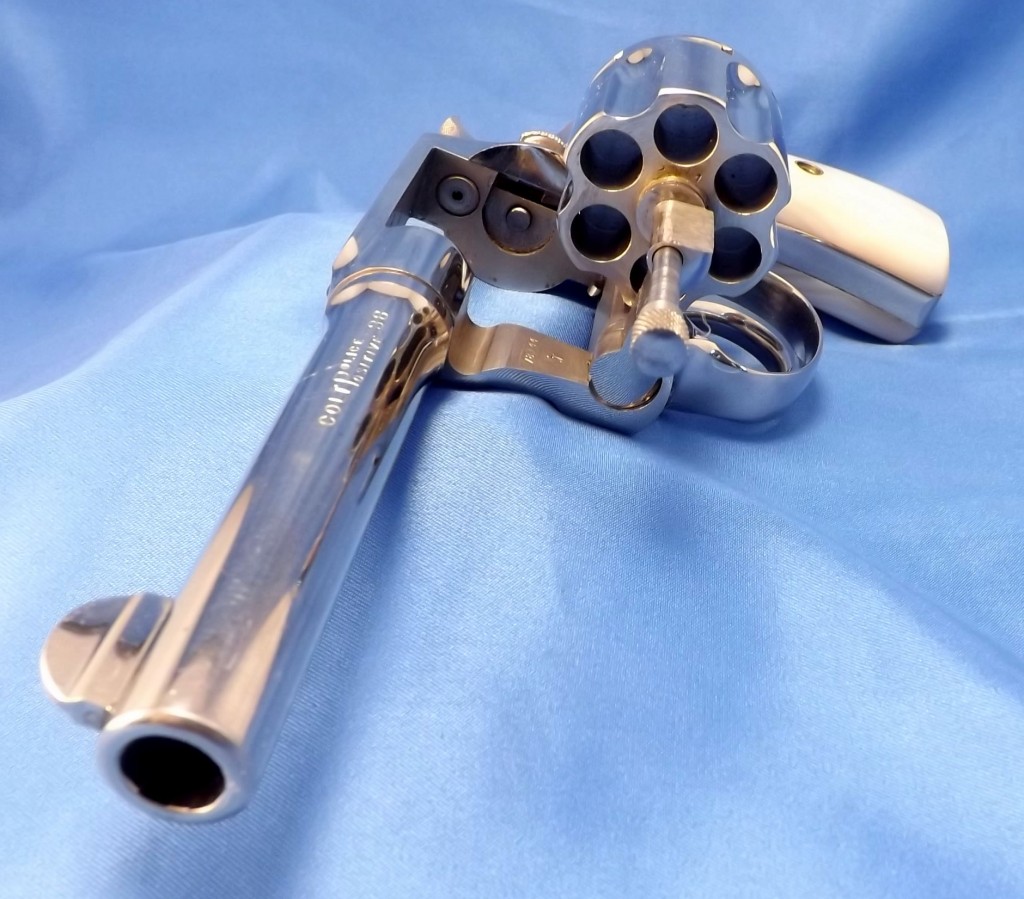 Most interestingly, this revolver has the name “A. E. Bargren” engraved on the right side of the frame.  A bit of work on the internet revealed that August E. Bargren was a member of the Rockford, Illinois Police Force from 1890 until 1940.  He served as Chief of Police in that town from 1894 until 1940, a span of 46 years, and that seems to be something of a record for the tenure of a police chief in view of the stresses of the work and the political nature of continuing in office.

It would seem that good service contributed to Bargren’s longevity in the chief’s chair. He was an effective leader of law enforcement and presided over the department’s modernization as it progressed from horse patrol to police cars with radio communication.  He readily adopted improvements in crime investigation involving fingerprinting and other methods of forensic work, and he presided over the department as women were added to the force. 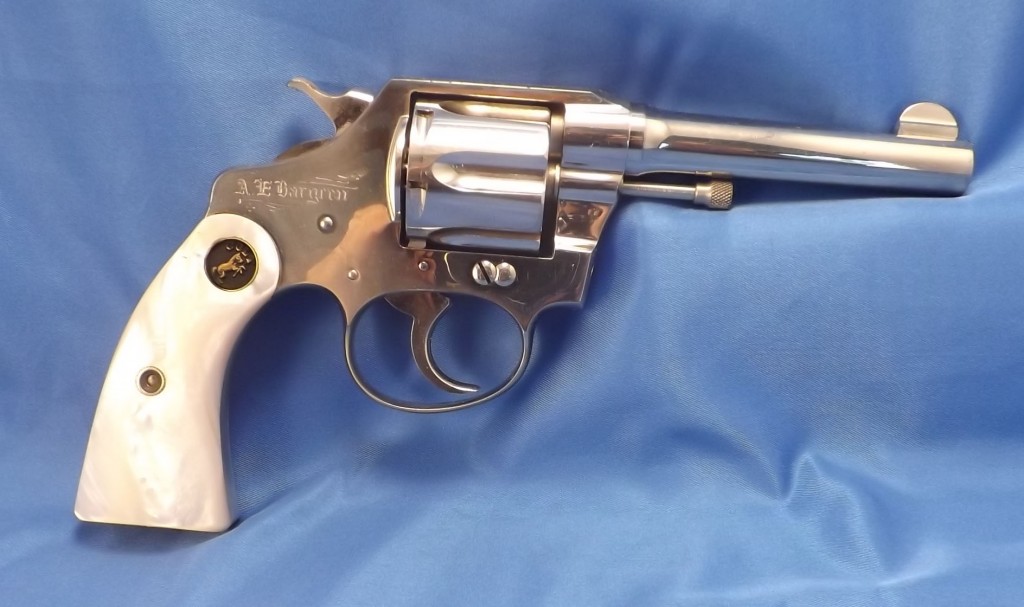 In addition, Chief Bargren was known as a humane administerer of the law who was not above giving a miscreant a second chance if he felt it was deserved.  Therefore, there were a number of people very grateful to Chief Bargren when they made a success in life after an early mistake.

The .38 Smith & Wesson cartridge appeared in the late 1870s when S&W introduced their line of hinged, top-break revolvers.  The first models were single action revolvers, but double action models were soon to follow.    Arriving when it did, it was, of course, a black powder round, but it easily made the transition when smokeless powder appeared.  The cartridge threw more lead than the contemporary .32 S&W and it became very popular for pocket carry and for police work.  This helped its popularity to last until well after the more powerful .38 S&W Special appeared in 1899. 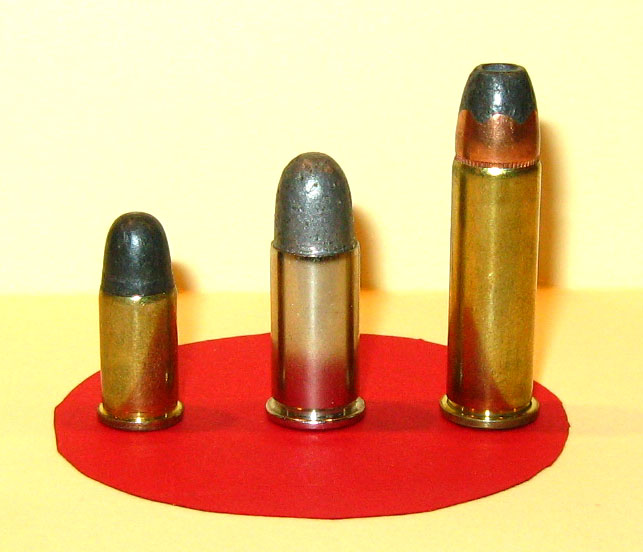 Today, most handgun enthusiasts would consider the .38 S&W to be a dead letter, but it is actually a pretty decent little cartridge.  When originally loaded with 14 grains of black powder, the velocity of the 145-gr lead bullet was about 750 fps.  Smokeless factory loads have since pushed bullets of this size in the 700-750 fps range from six-inch barrels.  Four-inch guns are much more common and will give velocities in the 650-700 fps range.  The British Military thought enough of this round to adopt it as their standard sidearm caliber in 1922.  They used a load that sent a 200-gr bullet out at a bit more than 610 fps.  All of these loadings will produce kinetic energy significantly less than 200 foot-pounds.

Handloading manuals always caution against the use of the old top-break revolvers, citing inherent weakness of the frame in such guns.  A solid frame revolver, such as the Colt Police Positive and various S&W Hand Ejectors is much stronger and for these you can whomp up loads that will yield 800-900 fps.The usual fast pistol powders will be sufficient.  Best accuracy will probably be realized with milder loads.  Ease of loading with small charges of powder and economical bullets should make the .38 S&W a rewarding cartridge for plinking and informal target shooting.  This is something I would like to try out, so there may be a future report.

Things That Get Lost

Things tend to get lost when ignored over a long period of time.  Guns and people get lost.  In this case, the gun was recovered because it made its way to a gun shop and I found it.  Seems that Chief Bargren would be the more serious loss.  He was an important historical figure in Rockford, Illinois, but apparently, not known or important enough for someone to want to hang on to his pistol at this late date.  Well, he died in 1942 after all, perhaps without much in the way of descendants.  Now, finding his fine revolver has allowed me to find him again and to honor his memory in this post.  I wonder where the Police Positive will be 70 years after I die.

I obtained a letter from Colt’s historical department and it verified that this revolver left the factory with a nickel finish in November, 1915, when it was shipped as a single item to a large hardware retailer in Chicago.  That would have been the year of Chief Bargren’s 25th anniversary on the Rockford Police force and I am wondering if it was a presentation piece to recognize that service.  It is certain that he never carried or fired it.  If so, it should be fairly easy to find a reference in the newspapers of the time.  That is what I am going to investigate next.