I don’t know if you have been wondering, but I want to let you know that I am alive and well.  We returned from winter quarters more than a month ago, but spring has been late in arriving here at ATOTT, and chilly, rainy weather has interfered with range activities.  Spring wild flowers have come and gone and the lilacs are now fading, but I have made only one trip to the range so far.  That will change.

I had a couple of good collecting experiences over the winter months, involving handguns, of all things.  The first picture shows a Colt Police Positive .38 with nickel finish and factory, mother-of-pearl grips.  The gun belonged to the police chief of a mid-sized city, and he apparently never carried it because it is in nearly 100% condition and unfired.  Very interesting for a revolver manufactured in 1914.  The caliber is what we today call .38 S&W (not .38 S&W Special).  It was invented by Mr. Wesson but Colt called it the .38 Colt New Police because they did not want to stamp “S&W” on their guns. 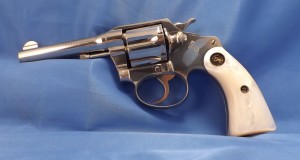 The second picture shows a Smith & Wesson Model 30-1 .32 Long.  This is a twentieth century descendant of the original .32 hand ejector model that appeared in 1896 when the .32 S&W Long cartridge was introduced.  I would date the manufacture to about 1963.  This revolver is also in new condition and came with original box and papers.  It also appears to be unfired. 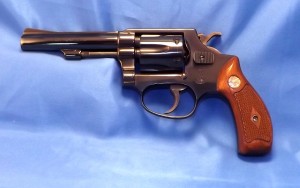 I am not going to fire the Colt because of its collector value and interesting provenance, but I will fire the S&W.  I have been a .32 fan since I met Great Grandma’s Pistol and wrote about it in an early post.  I want to try some factory ammunition and also do some handloading.  Great things about the .32 are that it is very pleasant to shoot, accurate, and you can get about 2000 handloads out of a pound of powder.

Full details for these two revolvers will appear in later posts.

Rifle range activities that I hope to get to soon include more shooting of the Ruger No. 1S Cabela’s Commemorative rifle that I first reported on in January, and some additional work with loads for the .300 Savage.  Reports will appear fairly soon, I hope.  Check it out every now and then