Evaluating Ammunition: How Many and How far?

The cost factor in ammunition testing is more important today than it has ever been before.  Every component of a cartridge has increased in cost and skyrocketing ammo demand has created a seller’s market.  I hesitate to give examples of specific prices because things have been changing so rapidly, but even before the recent madness the cost of factory rifle ammo was pushing $2.00 per round, even for common chamberings.  Premium bullets in high-end hunting ammo pushes the cost up even more.

I shoot groups at a range because it is fun and because I am curious about the performance of guns and ammo.  It is great to have your curiosity rewarded by careful experimentation and reliable shooting results.  It satisfies the inner scientist. Therefore, I am always going to shoot, but economics will have to be a serious consideration.

The first picture shows five consecutive, 5-shot groups fired at 100 yards some years ago with a Remington Model 700 VLS, caliber .308 Winchester.  This shot number and distance 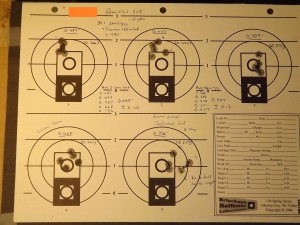 followed my standard practice in those days. I was happy with these results because they showed consistent, sub-minute-of-angle performance, actually, an average of 0.65”, with little tendency toward flyers.  These records followed a fair amount of accuracy work with the rifle and handload development with several different powders. The work paid off. In subsequent trials, the varmint-weight VLS rifle, with its laminated stock and heavy, 24-inch barrel continued to be a great shooter, with occasional, sub-0.5” groups.  Sometime soon I will do a post just on this rifle. It is interesting to recognize, however, that firing this page with factory target ammo today would cost close to fifty smackers.  Makes you wonder just how curious you can afford to be.

Yes, I know, handloading has always been a way to cut the cost of shooting, and tons of interesting projects can be pursued, but costs have gone up here, too.  Considering the current cost of primers, powder, match bullets, and brass amortized over 10 reloads, I get a figure of $0.56 per target load (with Sierra 168-gr MatchKings) in .308, or, $14 to shoot the page above.  This is the least it will cost me to satisfy the inner shooting scientist, so handloading still pays, that is, IF you can get the components.  Every one of the components I chose to figure this cost is currently out of stock at the large, online distributors.  Lucky I have enough stuff on hand to meet current needs.

As I said, I am always going to shoot, but I certainly need careful planning and efficient range behavior so that I get the most bang for my buck (Sorry about that).  One important choice to be made is the number of rounds to fire for each group.  Today, my ballpark says three to no more than five, but what are the concerns?

I love to shoot three-shot groups.  The test shooting takes less time and there is less trouble with barrel heat in high summer.  There is also a lower chance that a 3-group will be spoiled by a shot affected by wind, mirage, or a tic in shooter technique.  If you want the best chance of having your rifle or load look good, shoot threes.

However, these very “advantages” make it less likely that you will find a problem and they may allow you to overestimate the quality of the load or rifle in question.  For that reason, I like to add a fourth shot to my groups.  Lack of flyers in a series of four-shot groups is always an indication of good performance because flyers will show up with frequency in four-shot groups with loads or rifles that are not giving the best performance. The fours therefore give me more confidence in any conclusions based upon my results.

If four shot groups are good, then why not five?  That is simply a judgement call.  Adding a fifth shot increases your cost by 25% and it does not add that much to your evaluation of results, in my opinion.  Five-shot groups have been a standard for years, however, and when the American Rifleman tests a gun in their Dope Bag section, they shoot five or ten, 5-shot groups.  Or is it five, 10-shot groups?  I forget, but 50 shots is usually more than I feel I need. If I can get at least four consecutive, very nice four-shot groups I feel I am on pretty solid ground.  Often, I shoot more than that, as you know.

How About the Shooting Distance?

One hundred yards has always been common for reported results, but I like 50 yards, and there are practical reasons other than arthritic knees for choosing the shorter distance. Obviously, it takes less time to run targets.  More importantly, when I shoot I want the quality of the load to be the only variable, insofar as possible.  The shorter distance lessens the effect of wind and weather. There will also be a smaller difference in point of impact for different loads at 50 yards.  This can be a problem at 100 yards, where I have seen similar loads of different brands print as much as 10 inches apart.  I don’t want to have to use extra ammo to rezero my group and I DO NOT WANT TO CRANK MY SCOPE IN THE MIDDLE OF ACCURACY SHOOTING!  OK, fifty yards it is.  I can always check at 100 if I feel the need.

Bottom line:  I will shoot four-shot groups at fifty yards most of the time.  You have seen that already in a lot of posts at this address.

The next picture shows what I like to see at the end of the day, coming from a recent test of Hornady Monoflex 140-gr ammo, caliber .30-30 Winchester.  Call me a hypocrite for breaking my 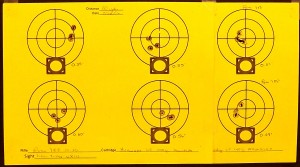 just-established guideline, but I had decided to shoot three-shot groups with this ammo because of its cost. The set of six, consecutive, three-shot groups was obtained using a Remington Model 788 bolt action rifle that had been carefully glass bedded some time ago.  The rifle was equipped with a Leupold Vari-X III 4-14X scope (Not a cheap scope!) set at 14X.  Firing was

done at a solid bench using a target grade front rest and a bunny ear, leather bag for the rear rest. For every shot the rifle was placed with the front rest supporting the foreend two inches behind the front sling swivel and the bunny bag supporting the butt stock one inch in front of the rear sling swivel.  Position was adjusted to center the crosshair on the bull with the gun then perfectly stationary in the rest.  I then held the forearm lightly just behind the front rest and I placed my shoulder against the butt with light pressure.  With the scope picture motionless I broke each shot with a fairly rapid, smooth pull.  Works better for me than slow squeezing, which can be affected by shortness of breath and uneven heartbeat.

The average size of the groups is impressive, but the most remarkable thing is the uniformity of the six, with a variance of only 0.13,” smallest to largest.  No brag here, just the fact that you can get similar results, if the ammo is up to it, by following the practices outlined in the previous paragraph.  Insuring identical conditions, shot to shot, is the key to reliable results.  In the end, that is at least as important as the distance or the number of shots for your groups.