One of the great things about the digital electronic age is that most shooting/reloading bugs can afford to have a chronograph. There are some good reasons for measuring the velocity of a fired round. For one thing, it is just fun to know the velocity of a favorite factory load in your rifle, and the uniformity of the load’s performance. Then, you want to make sure that your load will deliver what is needed in the game fields. More importantly, for handloaders, measuring the velocity of a handload is probably the best way to keep an eye on pressure.  Sure, pressure signs show up in fired cases but they are sometimes subtle and difficult to interpret. An accurately measured velocity, on the other hand, can give you a good clue when you are pushing things a little too hard.

I have used several different CGs over the years. My first was a simple Chrony which I bought soon after they first appeared for sale. It worked fine but after several years I moved to a Pact Model 2. This model has the sensors on a strong metal frame with the cable-connected readout/control unit able to be placed on the bench by the shooter. The convenient Pact worked very well until an issue developed due to the klutziness of the user and no fault of the unit. When I found that the cost of replacing the part that it needed was as much as the cost of some new, complete CGs I decided to try another Chrony. In the time since I had my first one, the Chrony line had been upgraded and expanded, and generally received very good user reviews. 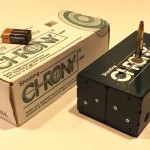 The pics show the Model F1 Chrony, the simplest model in their line. When unfolded, the metal box has the “electric eyes” at the ends of the box with provision for plastic diffusers to be held by metal rods above each sensor. These provide a clear field for each sensor against which to detect the passage of a bullet. Each of the support rods is composed of two pieces connected by a ferrule. Each plastic diffuser is composed of three pieces connected by tabs and buttons. Thus, you must assemble 14 separate pieces of metal and plastic to put the diffuser system in place. What a pain. I cut the pieces to six by epoxying the rods and the plastic pieces together. The digital readout is on one end of the unit and an on-off button is on the side. Turn 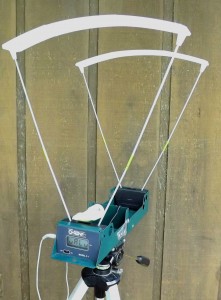 Chrony on, fire over the sensors between the diffuser frame rods (15 feet from the muzzle), and read your velocity on the screen. That’s certainly very simple and the F1 Chrony has given me accurate results, except under certain light conditions as described below.

The F1 Chrony generally costs less than $100, but you are going to want an accessory, a plastic push-button unit that plugs into a jack on the side of the box. If you fire a string, pushing the button will then give you the high velocity, the low velocity, the average, the extreme spread, the standard deviation, and the individual shots in the string. Now, who wouldn’t want that information? To get it you must lay out twenty bucks for the pushbutton unit. It is worth it.

Most users of chronographs know that cloudy days are better than sunny days for chronograph use and that certain light conditions may result in faulty velocity results. I will illustrate this with data from personal experience.

I was testing some 150-gr. factory ammunition in .30-30 caliber using the F1 Chrony. I fired a 12-shot string of a certain brand from my Winchester Model 94, with the following results:

These look like great results but the numbers were cause for immediate suspicion. A velocity of 2647 fps is in .300 Savage territory and could not be produced in the .30-30 at normal, safe pressures for that cartridge.  Several days later I repeated the measurements with the same load and gun and got the following results:

These velocity values show a drop of about 160 fps from the earlier results. An average velocity of 2450 fps, while still very strong for a 150-grain load, is much more reasonable.

So, what is going on with the earlier, faulty results? The afternoon was wearing on when I fired that string. There was strong sunlight coming across the unit at a fairly low angle. Apparently, some factor, perhaps a reflection from the bullet, tripped the rear sensor too early. This isn’t a very cogent explanation, but I can’t do any better. I do know that there are no problems when the sun is directly overhead or, say, between 11 and 1:00 o’clock overhead. Results are also somewhat dependent on the angle the sun makes with the long axis of the chronograph. I should point out that this situation is not unique to the Chrony, but could happen with any brand of chronograph.

The scary part is that there is nothing in the number pattern of the faulty results that would raise suspicion. The numbers are uniform with a decent spread and standard deviation. It was simply previous experience with the .30-30 that raised the flag for me. If I had been evaluating a new handload, I probably would have been tempted to believe, erroneously, that it gave terrific performance.

What, then, do we do with our chronograph? Stay alert, keeping mindful of past experience and of expected velocity values published in loading manuals. Avoid the lower angles of sunlight, or, shade the chronograph from crossing sunlight. It will work fine as long as the sensors see clear sky above. If results seem suspicious, recheck them on another, perhaps cloudy, day.