Two Sidearm Thirties: Colt Model of 1849 vs. Smith and Wesson No. 2

Time for some handguns here. The first picture shows a Smith & Wesson No. 2 Army and a Colt Pocket Model of 1849, two revolvers very similar in purpose, but quite different in design.  The S&W was made in 1861 and the Colt in 1867.  First, let us take care of the caliber. The Colt is marked “.31 cal.” on the left side of the brass grip frame just above the trigger. It was 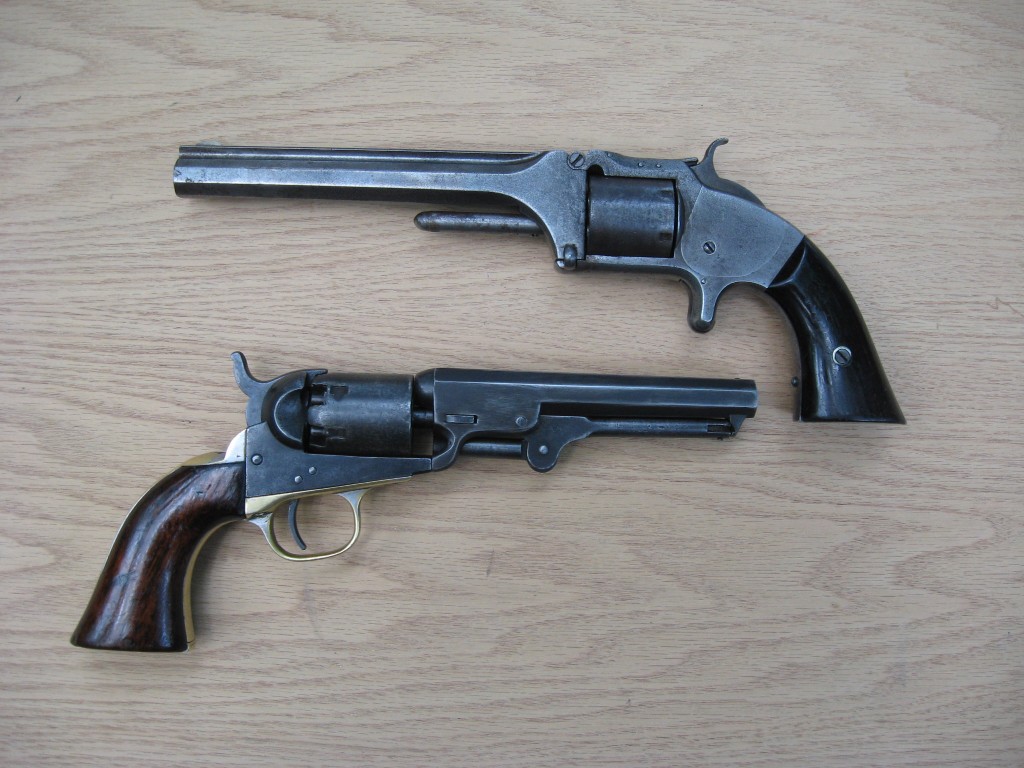 made to fire a ball of approximately .31” diameter.  The S&W carries no caliber designation but it is generally considered to be a “.32” because it took a cartridge known as the “.32  Rimfire.”  In spite of caliber designations, the bores of these two handguns measure close to .308,”  the same as usual measurement of the bore of a modern thirty-caliber rifle. The two revolvers, then, are “thirties.” Though not really small, the Colt was designated a “Pocket Model” because it was much smaller than its predecessors, the huge and various “Dragoon” models that were carried by cavalry soldiers. The 1849 model answered the need of civilians for a more manageable sidearm, one that would probably fit in the large pocket of an overcoat. The Colt’s competitor, the S&W No. 2 was, in fact, the second revolver model made by Smith and Wesson, and it is sometimes referred to as the “Army” model.  The U.S. Army, however, never bought or issued any of these during the Civil War, but many No. 2s were privately purchased and used as backups to army issue revolvers by officers and other soldiers. In this roll they proved to be very popular and S&W got more orders than they could fill. 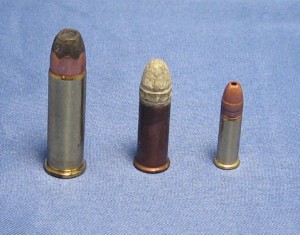 There is a sharp contrast in the firing mechanisms of the two guns.  The Colt is a percussion revolver. Each chamber in the cylinder must be separately loaded with black powder and ball, with the help of the loading lever, and then each must be fitted with a percussion cap on its nipple at the rear.  The S&W, on the other hand, fired a self-contained brass cartridge, one of the first sidearms to do so.  This arose from S&W’s control of the patent on a bored-through cylinder, necessary for a cartridge arm. Give the S&W a big edge for convenience in carrying ammo and for speed of loading.  The Colt would have used about 15 grains of black powder per load with the .31” round ball having a weight of about 46 grains, which is not much more than the bullet of a .22 Long Rifle.  S&W’s .32 Rimfire, on the other hand, used a 90-grain bullet backed by 13 grains of black. The Colt would produce the higher velocity, maybe 800-900 feet per second, but the S&W’s heavier bullet would probably give it an edge as a defensive round.

Looking at overall design, the Colt does not at first glance appear to be something you would make if you wanted a really trustworthy arm. The barrel-loading lever unit seems to be hanging tenuously in front of the cylinder with no top frame strap to keep it in place. Looks are a bit deceiving, however. Check the disassembled parts in the photo and you will 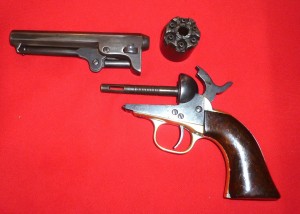 see that the barrel unit is connected to a very substantial axis rod that carries the cylinder and attaches the barrel with a strong wedge through a slot in its end. This cylinder rod is the heart and soul of a colt percussion revolver. The barrel unit is kept in alignment by studs in the bottom of the frame. Even without a top frame, the Colt is therefore plenty strong enough for black powder pressures.

The S&W, shown open in the next picture, would appear to be a better design in having a complete frame. Note also the previously-mentioned chambers bored completely through the cylinder. This was allowed by 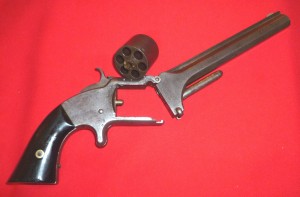 Smith & Wesson’s ownership of the Rollin White patent for same. Colt was thus prevented from moving to this superior design until the patent ran out some years later.  The S&W design, however, has its own weak points.  The hinge and latch are rather small and subject to wear and resulting shakiness. No strong rod supports the cylinder. At the front, a metal nubbin on the cylinder fits into a dimple in the frame below the barrel. The bottom line is that the design functions and is strong enough for black powder pressures while offering the decided advantage of cartridge loading. The photo shows that the cylinder may be removed for loading when the frame is open. The metal shaft below the barrel is used to poke empties out of the cylinder.

Shooting a historically important gun requires careful consideration. The Colt 1849 is relatively tight, indexes its cylinders well, and is probably in good enough condition to fire without incident. It is, however, a valuable collector piece in that the overall finish is very good, function is good, screws are not buggered up, and all serial numbers match. There is, therefore, little reason to fire it and jeopardize its collector value. I note that there are precise modern replicas of this arm available for those who need the experience of firing this model.

Like the majority of its brothers, my No. 2 Tip-up has lost all of its finish, but it is pretty good mechanically.  The cylinder indexes well and has no serious play. The problem here is one of ammo availability. There is at present no .32 rimfire ammo, except for a few collector rounds that would cost a bunch for the thrill of firing. However, Dixie Gun Works offers a 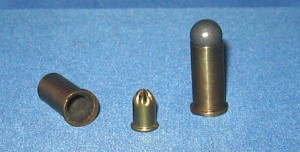 solution in the form of machined brass cases with .32 dimensions.  These cases have a drilled, off-center priming hole in which a.22 blank may be inserted for ignition of a black powder charge. The offset allows the rimfire hammer of the revolver to strike the blank correctly when it is inserted in a chamber.  A .31-caliber round ball may be used, lightly seated, as the projectile.The picture shows the scheme. Using a half dozen of these rather expensive cases, I loaded 5 grains of Pyrodex “P” black powder substitute, CCI .22 blanks , and Hornady .315” swaged round balls (47 grains each). This load 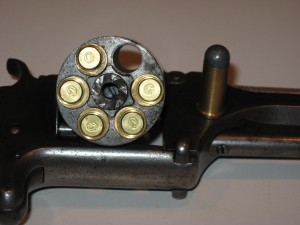 made a nice bark with just a little recoil and white smoke.  There were no misfires (the cases have to be chambered with the thin side of the head out so the rimfire hammer will smack the rim of the blank). The balls easily penetrated the piece of 3/8-inch plywood to which I had attached a target.  A six-shot group, fired at 15 feet (rested), is shown in the picture.  Ignore the “2” at 8-o’clock, which was the first shot fired from a clean bore, and the remaining five measure about 2.2 inches.  Their roundness makes it difficult to seat the balls uniformly from case to case, and this affects accuracy. Better results were obtained in further tests reported below. 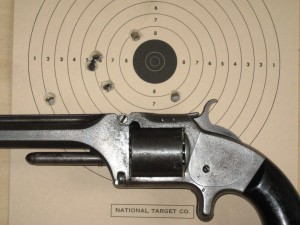 I checked velocities with my PACT chronograph on a sunny day, about 90 humid degrees at the range. Six rounds of the Dixie cases through my No. 2 gave an average of 1164 fps with an extreme spread of 121 fps. The highest-velocity individual shot through the No. 2 was 1227 fps! Granted that the round-ball projectile is light, but I was still surprised by velocities of this magnitude from 5 grains of Pyrodex. Clearly, the charge of the blank is adding more than I anticipated to the total power of the round. During this testing, the No. 2 kept the six shots in 3 inches at 30 feet. I note that these machined cases are thick and much stiffer than drawn cases and they do not obturate. The fired cases came out dirty as sin.

Further tests of penetration showed that balls launched by the long cases in the No. 2 will punch through three ¾-inch pieces of clear pine and lodge in the fourth piece at close range. A ball recovered from this test weighed 43.2 grains. Firing at close range at the wood indoors produced truly impressive muzzle blast, fire, and smoke.

The machined cases allowed me the experience of shooting this interesting, Civil War-era revolver and it was a lot of fun to have success. They are inconvenient to use, however, and the cases mouths easily get out of round which impedes cylinder loading and requires corrective attention. Not for every day fun, but they filled my need.

In the end I am not going to pick a winner, especially after having not shot both. One would favor the S&W on the basis of convenient reloading, but actually, I am not sure I would want to have to pull either one of these out of my pants during the heat of mortal combat because their power would be marginal. Nevertheless, they fulfilled a need in firearms history during a transitional period and they provide a nice contrast in the design of the two famous arms companies in the mid-19th century.

This entry was posted in Handguns and tagged Colt Model 1849, Colt Pocket Model, Smith & Wesson No. 2. Bookmark the permalink.