Bullets in the Spin Zone

Some Canada geese visited Tale of Two Thirties headquarters today.  The picture shows only a fraction of them.  It is now December 2 and we haven’t seen very many migrating waterfowl this year.  But this, and the fallen leaves, remind us that Mother Earth is spinning along in her appointed path around the sun. 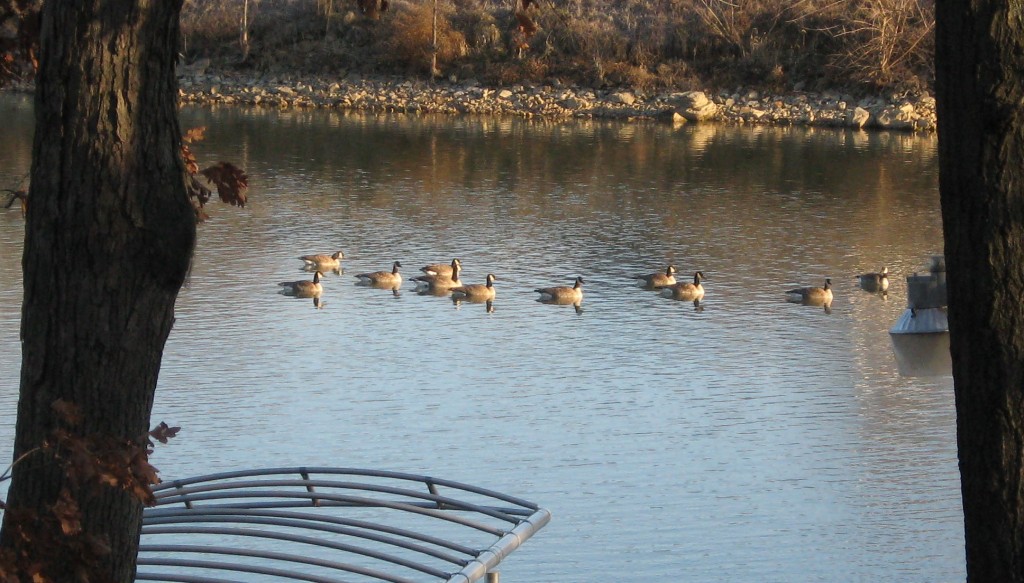 No one knows the exact date when bullets started to spin, but it was a long, long time ago in the age when round lead balls were still the common projectiles.  We know that there are several existing museum rifles, that is, guns with spiral grooves cut in the barrel, that can be dated as made in the 1540’s.  The “rifling” of gun barrels, and the stabilizing spin that it imparts to projectiles, has thus been around for the better part of 500 years.  This stabilization is likened to that of a spinning gyroscope, which resists changes in its orientation.  The spinning bullet resists forces which would alter its travel along the line of sight.  The exact place of origin of the rifle is also not known with certainty, but Germany is a good bet.  The first rifles were made to be sporting arms and the “Jaeger” type of rifle was used by the upper classes for hunting in that country.

An interesting question exists in regard to whether and how the first rifle makers knew that cutting spiral grooves in a barrel would result in more accurate fire.  They must have had some idea but where did they get it?  We might look to Sir Isaac Newton, who mathematically analyzed and described all aspects of motion, but Isaac was born at least 100 years after the appearance of the first rifled arms.  Likewise, the gyroscope, popular as a toy and useful in many scientific applications, was not invented until 1810.  A quick check of Leonardo Da Vinci’s work finds nothing regarding this idea.  The one stable, spinning object that did exist at the time of the first rifles, indeed extended back to Roman times as a curiosity and child’s toy, was the spinning top.  It appears that tops were invented independently in various parts of the ancient world.  My opinion is that some European gun maker saw a connection between tops and bullets, and tried the idea out.

In spite of the accuracy advantage of the rifle, guns without rifling, that is “smoothbores,” persisted in the military ranks of all countries right up to the time of the American Civil War.  This was largely due to long-accepted infantry battle tactics, which favored using fire from massed troops at relatively close range.  Smoothbores were much easier and faster to load than rifles, and an infantryman could be much more easily trained to use a smoothbore.  Using multiple projectiles (buck-and-ball loads), a high density of fire could be maintained by soldiers firing and reloading in turn in several ranks.  British soldiers of the flintlock period were highly trained and very effective in this technique.  The rifled bore offered no advantages for this kind of fighting.  Eventually, however, the value of aimed fire became apparent, and this, along with the invention of the easily loaded Minie bullet, meant that rifled military arms became the norm in the American Civil War after 1862, and ever thereafter.

It is, on the other hand, a popular belief that rifles played a key role in the American Revolution and in other fracases around the world in the 18th and 19th centuries.  Certainly the Pennsylvania/Kentucky longrifle was well-established at the time of the revolution and some were used effectively in limited engagements and sniper activities.  The main arm of the revolutionary armies, however, was the smoothbore musket.

History aside, the most effective modern hunting arms are going to be rifles firing elongated, conical bullets.  Spinning bullets can be treated numerically and I would like to look at some of the numbers, some of which are impressively large, and some not so huge at all.

Lets us say we have a rifle with a 24-inch barrel that fires a bullet at a velocity 2000 feet per second.  This is a little slow for a modern hunting rifle, but good for illustrations.  Let us specify that the “twist” of the rifled barrel is 1 in 12, that is, the spiral grooves make one complete turn in 12 inches, or two complete turns in travelling the length of the barrel.  After the bullet exits the barrel it will continue to make one revolution for every foot that it travels on its way to the target.

How fast is this bullet really spinning, say, in revolutions per minute (rpm), so we could compare it to the engine in a racing car?  Start with the fact that it makes one revolution in a foot while travelling 2000 feet in one second.  For rpm, then, we have 2000 revs x 60 secs, or 120,000 rpm.  No race engine ever turned over that fast.

Other numbers associated with spinning bullets are not so large.  Suppose you are shooting at a deer at a distance of 100 yards.  Making one revolution per foot of travel, the bullet will make only 300 revolutions in reaching the target.  Now, how thick is a deer’s body, on average?  Maybe 12 – 16 inches, meaning that the bullet will make only one revolution or a little more in traversing the deer’s body.  Of course, it will be less than that because a hunting bullet will expand and that will slow its revolution, especially as the expanded bullet is impeded by tissue.  Some destruction of the deer’s tissues might be attributed to the rotation of the expanded bullet.  How much?   I can’t say. I haven’t examined any wound channels in deer flesh, but I have seen reference to a “buzz-saw” effect in articles written by hunter-journalists.  Does it seem that such would be a significant effect in the deer’s demise?  I’ll keep an open mind.

My own interest in spiral grooves arises from the accuracy effect, for my game is to find how to make an arm shoot most accurately, that is, place successive shots in a small target area.  Rifles are made with different twist rates depending on caliber, length and weight of bullet, and bullet velocity.  Longer, heavier bullets need more spin for stabilization and that means a tighter twist rate or higher velocity, or both.  Of the thirties that I like to work with, the .30-30 Winchester and .308 Winchester rifles usually have a twist of 1 in 12”.  A .30-40 Krag, however, will measure 1 in 10”, as will a .30-06 Springfield, because these are likely to be used with heavier bullets than the .30-30, bullets in the 200 – 220-gr weight range.  Once you choose a rifle, you are stuck with its twist rate, short of a complete rebarreling job, but the manufactured twist rate will generally be appropriate for your uses, unless some bullet you want to use varies greatly from the norm for your caliber.  Interestingly, bullets for thirties are available in weights (and lengths) spanning the range of 110 grains to 220 grains.  A certain weight may be better stabilized, and thus more accurate, than another in a certain rifle, and that is generally determined by trial and evaluation at the shooting range.  In such trials lies a lot of the fun of the shooting sport.

This entry was posted in Uncategorized. Bookmark the permalink.