Myth of the Rifle More Accurate At Longer Range

Accuracy is the single, most prized attribute of a person’s rifle.  You can talk about the power of the cartridge or the beauty of the gun, but if you can’t hit what you are aiming at, nothing else matters.  For me, accuracy means firing several shots and having them strike in a small pattern, or group, of holes at point of aim, at the desired range.  A factory load or handload that gives a small group insures that you can hit what you are aiming at and success can be very satisfying.

The first photo shows Ruger’s famous single shot rifle, the No.1, this one a varmint style in caliber .22-250 Remington.  For varmints at long range the .22-250 has always been great, and this one is equipped with a Weaver V24  (6-24x variable) scope.

Check out the second photo to see the .22-250 cartridge, flanked by two .22 Hornets, and two .22 rimfire long rifles. As the size indicates, the .22-250 is a very powerful .22-caliber cartridge and the Ruger No. 1 is a very good shooter, but the model has design features that sometimes challenge a shooter in attaining the 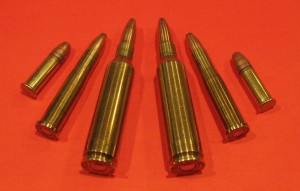 highest accuracy.  We do not need to go into those features here, but we can say that when you learn to get a No.1 to shoot really well, then you will understand the satisfaction I am talking about.   And you could work to get this kind of satisfaction with any rifle you own.

There is a myth concerning a rifle that puts all of its shots in the same hole.  Shoot five shots and find just one hole in the target.  This can’t be done because there are too many variables to control in the 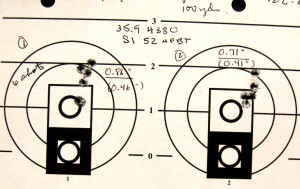 process of sending a bullet to a target, variables relating to the gun and the cartridge.  The ones you can’t completely control will send bullets somewhat off the point of aim.  The goal, then, is to eliminate or minimize these variations in order to get small groups.  The next picture shows what I am talking about, shots not all in the same hole, but in very small groups.  The two groups were fired at 100 yards using the Ruger .22-250 described above.  The first one shows five shots grouped in less than one half-inch.  The cartridge was a carefully-assembled handload using Hodgdon H380 powder pushing a Sierra 52-grain hollow-point-boat-tail bullet at about 3400 feet-per-second.

A related idea that I have occasionally seen in print in many years of reading gun literature is that there may be rifles that actually shoot better at longer ranges than they do at shorter ranges.  There is usually not much data to back this assertion, but it certainly is intriguing to contemplate.  Let me pose a situation to illustrate the idea.  Say you have a new rifle and in testing it you find it will shoot groups that measure 3 inches across at 100 yards.  When you try it at 200 yards, however, you find that it shoots groups that measure only 2 inches across.  That is certainly counterintuitive because you would expect a three-inch group to expand to at least 6 inches at double the range, and this is what one generally finds.  The increase in group size is linearly related to increase in range, and often more because the longer range increases the effect of wind on your bullet.  OK, but it is still fun to think about a rifle that plunks ‘em closer together at a longer range.

Well, let’s just dispose of this because the 3”-100-yd : 2”-200-yd rifle is impossible.  Think of a target at 200 yards with an imaginary target in the line of sight at 100 yards.  If a bullet passes the 100-yard target plane at three inches off point of aim, it would need to move back toward the axis of aim in order to arrive only 2-inches off at 200 yards.  With a group of such shots, this would mean that, after passing 100 yards, the bullet paths would in effect reorganize to become more ordered as they progress to 200 yards.  This would be a violation of natural law.  It could only occur in a world where water runs uphill and perpetual motion machines are possible.

Perhaps, however, what we mean by more accurate at long range is this:  The rifle shoots 3 inches at 100 yards, but you get 4.5 inches at 200 yards.  In doubling the range, the group size only increases by 50%.  This is a much more common observation in gun literature and is sometimes explained this way:  At a certain point in its travel, a bullet “goes to sleep.”  This means that factors that cause the bullet to deviate from a perfect path will be minimized at a certain point in its travel, and the snoozing bullet will then deviate less in its further travel to the target and will arrive closer to the point of aim than expected.

The science of how a bullet behaves in flight is called “Exterior Ballistics” and, as you might expect, it is complicated.  According to this science a bullet in flight will “yaw,” that is, it will wag back and forth on an axis perpendicular to its line of flight.  It would seem that this yawing motion, considering that a bullet might not be perfectly balanced around its central axis, would contribute to deviation from the line of sight. Supposedly, there is a point at which the yaw angle becomes very small and this is what exterior ballisticians call the “yaw of repose.”  That sounds like a sleeping bullet to me.  I suppose I could buy the idea that a bullet with minimum yaw is more likely to adhere to its intended path, so perhaps I could accept the accuracy characteristics for different ranges cited above.  Perhaps, but in fact I see very little evidence of yaw in my targets.  At ranges of 50 and 100 yards the bullet holes in my targets seem perfectly round, and very close to the diameter of the bullet.  If I can’t detect yaw in the holes of my targets, how can I accept this explanation for increased long-range accuracy?  I do not know, and I am going to have to leave it at that because I also have no better explanation for the rifle more accurate than expected at longer range.

Now, you might say to me, “Hey, I shot a 3-inch group at 100 yards and then I shot a 2-inch group at 200 yards, so you are mistaken.”  I will say “I believe you.”  It is entirely possible that you did this, but it does not mean that you have a rifle that is consistently more accurate at 200 than at 100 yards because such sample results are fortuitous and not statistically reliable.   A statistically reliable number of groups will never show an average of 3” at 100 yards and then of 2” at 200 yards with the same rifle, for reasons cited above.

As always, we have to do enough shooting to be sure of our results.

This entry was posted in Rifles/Other. Bookmark the permalink.