Now might be the time to start worrying about whether you are going to get summer’s projects finished before summer is.  Lots of hot weather and a fair amount of rain have passed by Tale of Two Thirties headquarters.  On the shooting front, I have produced several target backers like the one in the picture.  That looks like a lot of shooting, but actually, not as much as I would have liked at this point.  Suffering heat, humidity, and storminess have prevented some trips to the range I use, which is only open on weekends.  Nevertheless, I have done a lot of work with Hornady’s LEVERevolution cartridges, powder, and bullets for the .30-30 Winchester.  Soon I will be able to report velocities and accuracy results for five different rifles. 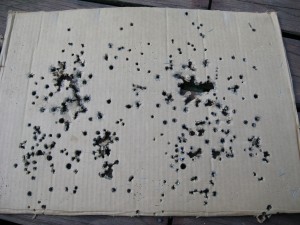 I have also been working on a “Tale of Two Thirties” comparison of a couple of .30-40 Krag rifles.  Born in military service, the Krag is a wonderful old cartridge, both in power and accuracy, but it never approached the popularity of the .30-30 Winchester. Why?  I will soon be able to give an opinion on that and will report a bunch of shooting results to compare modern and vintage Krag rifles.

One of the highlights of the summer is the Missouri Valley Arms Collectors gun show in Kansas City.  This show always has about 800 tables of collector rifles, shotguns, and pistols of all ages.  I added the small revolver shown in the picture to my holdings.  I guess it is my experience with Great Grandma’s .32 that stimulates my liking for pocket pistols (see two earlier posts).  This one is a Smith and Wesson and would be known as a top-break, double action .32, Fourth Model.  It was made in the early 1900s and fires only the .32 Smith and Wesson (short) cartridge, not the .32 S&W Long.  It is in very good mechanical condition so I will be able to shoot it with light loads concocted in my shop. 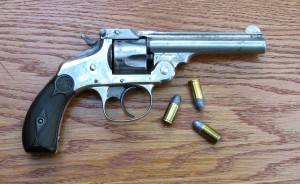 Yes, I have to confess to a lot of interest in handguns, and I have indulged that this summer, shooting various .32s, .44s, and .45s, and even .44 Magnums.  But only to unwind after the rifle work is done.  Most of the shooting results will be reported eventually in posts and articles.

Our local museum and historical society  would like to have some activities to recognize the Americal Civil War sesquicentennial and I agreed to present a short program in October on “Guns of the Civil War.”  Now I am trying to figure out how that can be a “short” program.  Probably just cover the most commonly used rifles and pistols used by North and South.  That is going to take some study.

Let us hope for a lovely fall because I really need more productive days at the range if I am going to have enough results to keep me writing over the winter.  See you Later.