And would it qualify as a “thirty?”  Well, in the Europe of the Mauser brothers, whose rifles took over the world military market in the late 1800’s, rifle bores were metrically expressed, so the 7.65 is 7.65 millimeters.  The  Mauser adopted by the army of Argentina fits in the series of Mauser rifles as the model of 1891.  This bolt action, magazine rifle fired a cartridge of caliber 7.65 mm having  a length of 53 mm.  Thus, the cartridge is known today as the 7.65 x 53 Argentine.  It was one of the first small caliber Mausers and one of the first to use smokeless powder.

The old American thirties that I like to work with, the .30-30 Winchester, .30-40 Krag, and .30-06 Springfield, and all of the later .30-caliber cartridges that have succeeded them have a bore diameter of 0.300 inches and launch projectiles having a diameter of 0.308 inches, a bit wider than the bore diameter so as to fill the grooves of the rifling.  Since one inch is equal to 25.4 millimeters, we can calculate that a .30-caliber rifle would have a bore diameter of 7.62 millimeters.  In 1953, NATO forces adopted a cartridge called the 7.62 x 51 NATO.  The American Army adopted the 7.62 in 1957, and when the round was offered for civilian hunting use it became known as the .308 Winchester.  Yes, cartridge designation can be complicated and confusing. 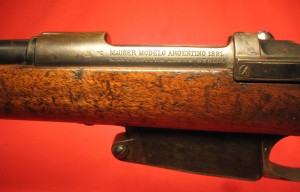 enough!”  The Model 1891 shown in the picture is a bolt-action, magazine rifle with a barrel about 29.2 inches, all held in a walnut stock.  The Argentine design had appeared a couple of years earlier in groups of rifles made for Belgium and Turkey, and was manufactured by the German firm of Ludwig Loewe and Company.  Argentina became a world economic power in the late 19th century and, wanting to maintain a strong military, ordered 180,000 of these rifles.

The Loewe Company was known for good workmanship and it shows in the Argentine Mauser. The bolt action is smooth and the trigger, the usual two-stage

military type, is not light but breaks cleanly.  The rear sight is a typical, military ladder type,  graduated to 2000 meters.  The rear sight notch is a V, matching the inverted V of the front sight.  The magazine can be removed from the rifle but it need not be, as the rifle was meant to be loaded through the open action.  The lips of the 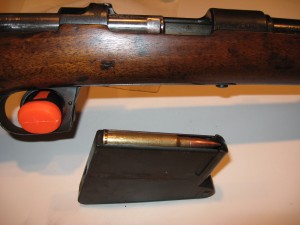 magazine are spring steel, a design that allows  cartridges to be easily inserted from the top.  In battle, a stripper clip of five rounds was to be used to quickly load the magazine.

One of the main differences between the Model 1891 and later Mausers concerns the design of the bolt.  The picture shows an 1891 bolt and a bolt from an 1896 (Swedish) Mauser, holding their respective cartridges.  Both bolts have the two opposed locking lugs that became the norm for military and sporting rifles, and is still in use today.  The 1896, however,  has the large claw extractor that became a 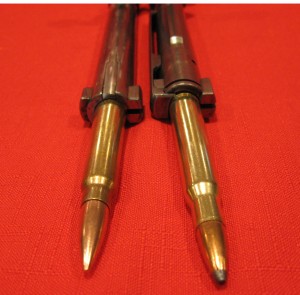 Mauser trademark for its strength and reliability.  The design continued in all later Mauser models, was used in our own 1903 Springfield military rifle, and appeared  in many sporting rifles throughout the 20th century.  Note that the 1891 extractor, visible at the top of the bolt, occupies a cut in the rim of the bolt face and is much narrower.

Years ago, American cartridge makers offered factory loads for the 7.65 x 53, but no longer. However, a Serbian company, PRVI Partizan, offers loads which are readily available in this country.  I was able to obtain a couple boxes with 174-grain full-metal-jacket bullets, and soon headed for the range with 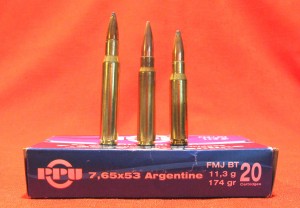 Senor 1891.  The power of this cartridge is readily apparent in the stout blow that it gives your shoulder upon firing.  If you launch a 174-gr bullet at over 2500 feet-per-second, from a rifle with a metal butt plate, you are going to have significant recoil (In other words, it kicks like heck).  Firing occurred without malfunction and extraction and ejection were very positive.  Point of impact was about 4 inches high at fifty yards, typical for old military rifles.   Accuracy was also very good with four five-shot groups at 50 yards giving groups in the 1 – 1.5-inch range.    Getting good results with military sights is largely a matter of using an appropriate target design, and the solid black bull is often not the best.  I found that a black-bordered yellow circle allowed me to reliably reproduce a good sight picture with the pointy front sight. 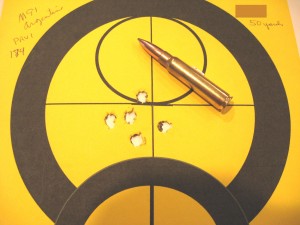 Way back when, surplus 1891 Mausers were shortened and equipped with better stocks, triggers,  and sights.  These sporterized versions made decent hunting rifles, but there is no reason to do that today because for the same cost you could get a modern hunting rifle.  On the other hand, if you are like me, that is, one who likes to mess around with vintage stuff, the Argentine Mauser is a rewarding arm.  If you run on to one and decide to try it, just make sure your edition has correct headspace before firing it.