The .410 Shotgun, An American Tradition

“Roy, go get the little four-ten.”  When I was a boy, these words, uttered by my dad, were always music to my ears.   They meant that there was some excitement afoot.  Perhaps a rabbit hunkered down under a tuft of snow-covered weeds, or maybe some ground squirrels in the cornfield, pigeons roosting in the barn, or some other varmints that needed discouragement.  I never needed to be asked twice, or told to “hurry up.”  The little .410 was the first gun I fired that actually burned powder, and it participated in much of my early shooting education.

This .410 was a single-shot, break-open model with a hammer you had to cock when it came time to shoot, a really economical farm gun.  Dad claimed that he got it at a pawn shop for three or four bucks when he was young. It had a 2-1/2 inch chamber and fired a shell loaded with ½ ounce of lead shot, a pretty puny load as shotguns go, but adequate

for pests or an occasional rabbit or squirrel at close range.  On the side of the action the name “Hercules” was proudly inscribed.  This name, a bit of an overstatement, always puzzled me and I wondered about the company that made it.  In those days the Hercules Powder Company was one of the main companies making gunpowder for sporting 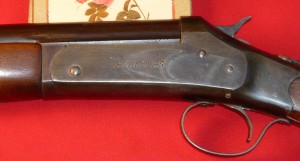 Left side of receiver

ammunition.  One day I wrote a letter to the Hercules Powder Company and inquired if perhaps they might be the folks responsible for my Hercules .410.  Of course, I never received an answer.  I was well into adulthood when I learned that the gun was made by Iver Johnson’s Arms and Cycle Works of Fitchburg, Massachusetts.  They called it the “Champion” but made some for Montgomery Ward to sell under the name “Hercules.”

The history of the .410 shotgun is a bit murky, but it seems to have originated in Europe, probably Germany, around 1910.  This explains why the 1908 Sears and Roebuck catalog lists many, many shotguns for sale but no .410s.  In Europe, the cartridge was given a metric designation, 12 mm.  As our name indicates, however, the gun has a bore diameter of .410 inches, and this is a different way of expressing the size of the gun than is used with other shotguns, for which the term “gauge” is used.  Remington-UMC manufactured 2-inch and 2-1/2 inch .410 ammo beginning in 1915.  Winchester followed suit in 1916. Sources say that the Iver Johnson Champion appeared in 1909, but it was made in many gauges, and it is likely that the .410 appeared at a later date.  At any rate, the .410 was in operation well before 1920.  Someone with access to old gun and ammunition catalogs may find other interesting info.

The .410 is the smallest shotgun size available and is therefore light and easy to handle, with not much kick, but difficult to learn to use effectively because of the small amount of shot that it throws.  Hitting game can be much more difficult than when using a 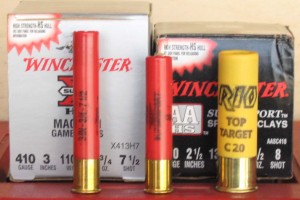 shotgun with a larger shell.  This is the kind of thing that bothers you only if you know it, and worry about it.  I guess I worried a little bit about it, because when I heard that a 2-1/2” chamber could be lengthened to 3” by reaming it, I was off to the local gun shop with Hercules in tow.  It had to be sent out somewhere to a gunsmith and when it came back it fired 3” shells very nicely, and I was happy that now I could throw a whole ¾ ounce of shot, a 50% increase and not to be sneezed at.

One .410 caper unfolded when we discovered that a local skunk had developed a taste for eggs and was satisfying it in our henhouse.  He would enter in broad daylight, push eggs out of the nests, and dine on them after they had broken on the ground.  Hercules and I were given the assignment of putting a stop to this.  Dad’s only advice was “You need to get him good with the first shot, otherwise, he will spray all over.” It wasn’t long until Mr. Stinky made another daylight raid, as announced by the fussing of the hens.  I wish I could remember the details, but I can’t.  I must have got him good with first shot, though,  because he did not spray all over, and the egg piracy was at an end.  The poor guy’s appetites got him in trouble, something that seems to happen to all species.

Other troublesome appetites appeared during corn-planting season.  Ground squirrels would burrow and nest in the fencerows, then sneak out in the field and dig up planted kernels, in other words, they had a really good thing going.  Nice snug nests, and farmers delivering their food with expensive equipment.  Of course, this could not be condoned and so I was allowed to carry Hercules on the tractor during the first cultivation (1).  With the little .410 this had to be a short-range process, but the squirrels were less afraid of the tractor than they would have been if I had stalked them with the gun on foot.  I could usually pick off several, early in the morning, before they disappeared into their holes.  Old farm boys know that tractor work can be boring, but squirrel hunting added a little excitement.

Once in a while, in the fall, dad would take me to a patch of hardwoods where he had hunted squirrels when he was young.  A small stream ran through the woods and I always had a fishing rod along so that I could fish for sunfish and suckers if the hunting got boring, and it sometimes did.  I carried my .22 and dad had the little .410.  One day we had a squirrel in the top of a tall oak, and dad let fly.  Boom! And the squirrel jumped to another branch.  Boom! And he came tumbling down.  I said, “Dad, I didn’t know you had a repeater.”  I still don’t know how he got the single shot reloaded so fast.  We chuckled about this for a long time.

Hunting and sport shooting activities flourished after World War II and I kept track of the situation by reading Field and Stream, Outdoor Life, and other magazines.  I was just becoming aware that it was possible to reload shotgun shells and one day I saw an ad that 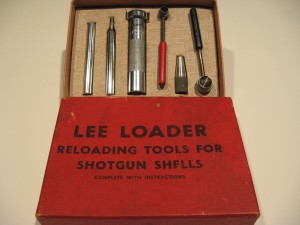 stood me on my head.  The ad was for the “Lee Loader,” a set of small hand tools that would load shotgun shells, available in all gauges, for the sum of $9.95! (2)  It wasn’t long until I had a Lee Loader for .410, had assembled the necessary primers, powder, and shot, and was reloading shells in the kitchen.  I am not sure that mom knew what I was doing, well, actually, she usually had me figured out so I guess she just went along with it.

This new availability of economical shells sparked an interest in shooting clay birds so I got a “hand flinger” from the old Herter’s company of Waseca, Minnesota.  I shot a few clay birds whenever I could talk dad or my sister, Ann, into flinging them for me.  It was a lot of fun and certainly was not easy shooting with the little .410.  I know this occasional practice continued into adulthood because I have some 8 mm movies of it, and I never had a movie camera until our kids were born.  In one of the movies, Ann is shooting and she got really amused when she managed to hit one.

One might guess that Mr. Hercules would not escape amateur gunsmithing, and that was the case.  At one point the firing pin broke.  Dad and I discovered a nail of the same diameter as the pin, ground a firing point on it, and filed a notch on the top so a set screw would hold it in the gun.  We didn’t have a screw with the right threads, so a sickle-bar rivet was pounded into the hole and it did the job.  This is really amateur gunsmithing, not to be recommended, and I have often thought we were lucky not to have made the firing point too sharp.  That could have pierced the primer on firing and would have released hot gas to the outside world, with possible injury.  I will give dad credit for getting it right.

For many years after I left home, Hercules rested peacefully at the farm in the gun rack I had made in junior high school shop class.  He was shyly wearing a coat of aluminum paint on his receiver, something I thought, somewhere along the line, would spruce him up a bit.  I was eventually given the happy assignment of caring for Hercules full time, and he is now living the good life under my care.  One can still get parts for the Iver Johnson Champion from Numrich Gun Parts Corp. (3), and a new firing pin and set screw fit Hercules perfectly.  The front sight bead had become loose and disappeared, so I threaded it oversize and put in a nice, new ivory bead.  The aluminum paint was removed and all metal was cleaned and given a cold blue treatment.  The stock was worked with steel wool and furniture refinisher, then given a coat of tung oil.  This does not make the gun look new, which would be undesirable, but it gives a uniform, vintage finish which is quite pleasing for an old gun.  The joints on old break-open guns often get loose, but Hercules seems as tight as the day he was made.  I think he is ready for another 100 years.

A lot could and has been written about other, fancier .410 shotguns.  The same Iver Johnson company made a double-barrel shotgun called the “Skeeter” in .410 bore.  Another famous .410 is the Winchester Model 42, the .410 version of its famous Model 12 pump.  These, of course, were discontinued many years ago and are now collector’s items.  You had better have a roll of thousand-dollar bills if you want an example of either one of these.  Many other makers of quality side-by-side and over-under double barrels have always issued .410 models for skeet shooting or hunting.  I may never have one of these pricey versions, but if I should run on to an Iver Johnson Champion in decent condition, I would probably try to buy it.  It is one of the most graceful little arms ever made. 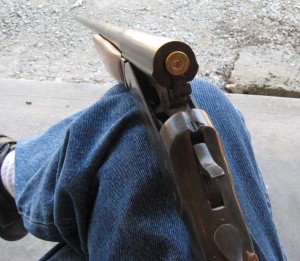 (1)   Corn farming has changed enormously since the 1950’s.  In those days, we removed weeds with a ‘cultivator,” a tractor implement that straddled the corn rows.  The first cultivation was done when the corn plants were quite small.

(2)  The Lee Loader was one of the first products sold by Lee Custom Engineering, a company founded by Richard Lee in the late 1940’s.  The Lee company, still in business and greatly expanded, has always sold excellent, economical reloading equipment.

(3)  The Gun Parts corporation (www.gunpartscorp.com/) is the first place you want to look if you need a part for an old gun.

This entry was posted in Personal History, Shotguns. Bookmark the permalink.