The Daisy Red Ryder Carbine, Then, and Now

Breathes there a kid so disinterested,

who never to herself has said,

The western comic strip,  Red Ryder, was drawn by Fred Harman and appeared in 1938.  The strip was eventually syndicated in 750 newspapers and survived for many years.  Red was a tough, no-nonsense western hero, not afraid to use his fists or his guns, and he survived many scrapes accompanied by his young Indian sidekick, Little Beaver.  In a very short time the company now known as Daisy Outdoor Products was licensed to sell a BB gun that resembled a real Winchester rifle and that carried a Red Ryder lariat logo on one side of its stock.  The Daisy company had successfully made BB guns since the late 1800’s, and the Red Ryder model was a big success.  If you think otherwise, consider that the Red Ryder Carbine is still available, more than fifty years after the end of the comic strip.  As a boy I was the lucky birthday recipient of a shiny Red Ryder BB gun, and I have written about that in my post Disappointment (Dec. 3, 2010).  I still have it, after how many years I shall not say (well, more than fifty), and it still works.

Recently I was cruising WalMart and my eyes fell on a rack of, guess what?  Daisy Red Ryder BB Carbines, labeled “just like your dad (grandpa?) used to have.”  No way could it have the magic that the first one had, but the price, at $22, seemed to have suffered much less inflation than everything else I buy, so I took one home with me.  Now, with my old one, the stage was set for “A Tale of Two BBs,” and begged for comparisons of looks, quality, and performance.

There is a great resemblance between the old and new editions.  You would never mistake the new one for anything but a Daisy Red Ryder.  The stock and foreend are still real wood and the impressed Red Ryder lariat logo is identical with the old, although it is on the right side of the buttstock (??).

The logo is the same, but is on the left of the old one and on the right of the new one. Don’t ask me why.

The lever, receiver, and barrel are metal.  Modern practice, however, appears with the trigger group and sights, which are plastic.  Excuse me, I meant “polymer”, the current term for synthetic materials because it has a more scientific sound to it, and lacks the 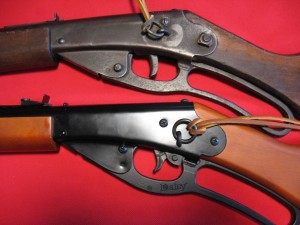 Note the push-button safety behind the trigger.

cheap reputation of “plastic”.  I would add that Glock, Smith & Wesson, and others are making frames for their semi-automatic pistols out of “polymer” so it works for gun parts and there is no shame in it.  Note in the picture that the current model has a safety, a cross-bolt design, located behind the trigger.

The method of attaching the stock to the receiver has not changed, and this is a weak point of the Daisy because the top screw hole in the wood gets worn and then the stock connection gets loose.  The loading procedure is also different for old and new.  On the old, the barrel cap rotated to uncover the magazine tube to which the BBs were added.  On the new there is a covered gate on the side of the barrel, near the end, that can be opened to admit the BBs. 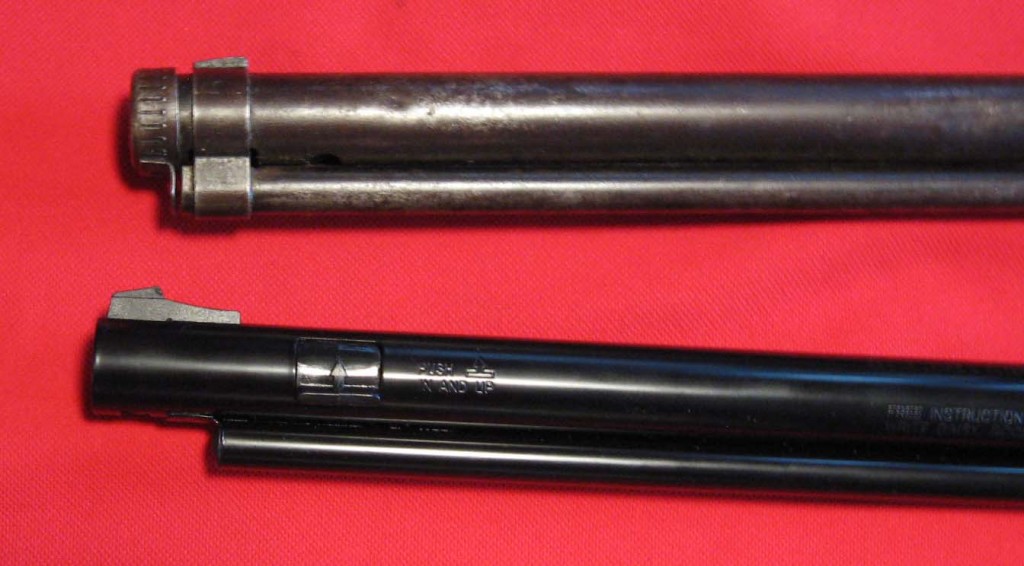 Push in and up on the panel of the new model and you can add BBs in the opening.

Testing these poppers was a bittersweet experience as it became obvious that time has taken its toll on my ol’ Red.  The package of the new model advertises that it will hold 650 BBs and will shoot them with a velocity of 350 feet-per-second.   I think the old model was said to hold 1000 BBs, but why quibble over that?  Much more exciting is the velocity prediction, which would be a considerable increase over the BB guns of yore.

The new model has some operational improvements.  The cocking lever is attached to a ratchet and must be moved through seven clicks of the ratchet to bring it to full cock.  If you are not quite strong enough to do this in one motion, the ratchet will hold its place while you rest , meaning you don’t have to start from nothing if you didn’t get it fully cocked on the first try.  The gun will not fire if the lever is not fully cocked, and, it will not fire if the lever is not in its fully closed position.  This prevents getting a painful rap on the fingers if you were to inadvertently fire the gun with the lever open (discharge of the mainspring causes the lever to close forcefully).  Happened to me a time or two years ago.  The safety on the new model also works well, so we would have to say that this new Red Ryder is a safer gun for beginning shooters.  I should note that these changes may have been made some time ago.

Daisy was as good as their word in stating the BB velocity of this gun.  Five shots over my chronograph showed an average of 345 feet-per-second with a high individual shot of 351 fps.   On the other hand, my ol’ Red averaged, shucks, only 186 fps.  Contemplating the increased power of the new one, I lined up some soda cans.  The new Red penetrated both sides of the first one, the first side of the second, and banged the far side of the second so hard that it dented the third can.  My ol’ Red only managed to dent the first one, with a crack in the dent, but could not penetrate it.  The new Red could stick its BBs in soft wood, but could not bury them in it. 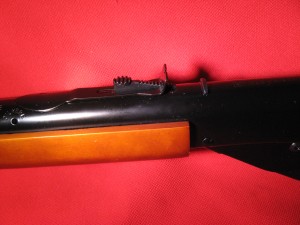 Move the serrated ramp to the rear to raise the sight.

For accuracy testing I put up targets at 15 feet, a common distance for target shooting with BB guns.  The new Daisy put ten shots in a circle measuring a smidge less than 1 inch.  My old Daisy put the same in a circle that was a smidge larger than 1 inch, not bad, I thought. The new one shot a bit high and to the left but I think a little fiddling with the sights would put it right on.  The rear sight has a serrated ramp for adjusting elevation.

The bottom line seems to be that the modern Daisy Red Ryder Carbine is a better, safer BB gun than the first models produced years ago.  The significant power certainly indicates the continuing need for supervision of young shooters who are learning the basics of gun handling and gun safety.  If that is followed, this Daisy would be fine for introducing kids to the world of shooting, but they would probably ask “Who the heck is Red Ryder?”

Who never to himself hath said,

This is my own, my native land!

Whose heart hath ne’er within him burned,

As home his footsteps he hath turned

From wandering on a foreign strand!”

From The Lay of the Last Minstrel

This entry was posted in Personal History, Rifles/Other. Bookmark the permalink.