There were many so-called “pocket pistols” available in the days when Grandma carried hers in her apron pocket. This arose from the desire of the general population to have some means of self defense that would be smaller and more manageable than the heavy, awkward handguns of the military, handguns so heavy they had to be carried in scabbards across the saddle of a soldier’s mount.   Gun makers of the day were more than happy to satisfy this desire with revolvers ranging from tiny to modest in size.  Gamblers and desperadoes also, no doubt, welcomed the availability of these arms.

My Great Grandma’s pistol was a Harrington & Richardson six-shot revolver of .32 caliber.  I described this arm in detail in my post Great Grandma’s Pistol of November 14, 2010 and I recommend that you read it if you have not already done so.  As I finished that post, I felt the desire to do a bit more shooting with Grandma’s favorite, and I am now able to report on that.

Smith & Wesson developed the first .32-caliber, center-fire* cartridge for their pocket pistol, known as the Model 1-1/2.  It was a sweet little pistol and the .32 S&W cartridge became very popular. 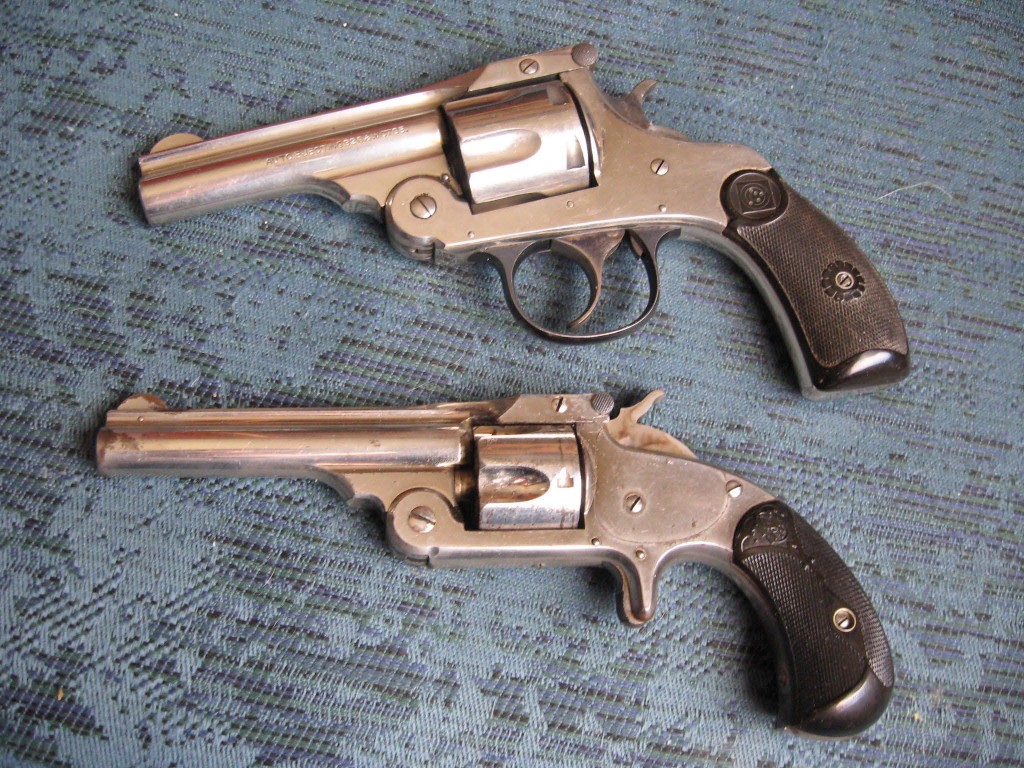 Competitors, such as Harrington & Richardson, and Forehand and Wadsworth, got on the bandwagon with .32’s of their own.  Time passed and a more powerful kind of gunpowder, known as “smokeless” powder, appeared.  Along with this, Smith & Wesson lengthened the case of the .32 S&W cartridge and called the new version the “.32 S&W Long”.  This more powerful cartridge became the norm for small pocket pistols and even some police revolvers were chambered for it.

Grandma’s H&R is chambered for the Long cartridge, and, having been made around 1914, was intended for use with smokeless powder.  I had fired this gun with the original .32 S&W (short) cartridge, and was then tempted toward more banging around with the Long.  Interestingly, both versions, tracing their lineage back to 1878, are still commercially available, being loaded by Winchester, Remington, and a couple other ammo companies.  You won’t find them on Wal-Mart’s ammo shelf, but you can get ‘em if you know where to look (larger gun shops and on-line shooters’ supply houses).

I fired seven five-shot groups at a target distance of 15 ft., a reasonable test distance for a pocket pistol intended for self defense, only.  The .32 S&W Long is a pleasant round to shoot, giving only modest recoil, even in this light, short-barreled revolver.  Function of the pistol was just fine.  Two representative groups are shown in the picture.  Groups measured around 1-1/2 inches in diameter, 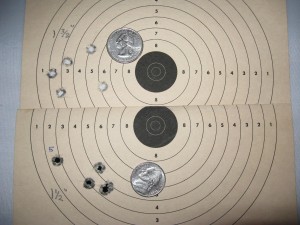 and there were a couple in which four of the five shots were very closely clustered.  In firing these groups I used a “six o’clock hold,” that is, the aimpoint was the bottom of the black bullseye.  Results show that Grandma’s pistol generally shoots to the left of and a little below the point of aim.  This is common with guns that have fixed sights.  By comparison, a modern, accurate revolver should shoot a group of 1-1/2 inches at 75 feet, but all-in-all, I felt the H&R performance was pretty good for a near-100-year-old piece. I still would not be tempted to carry it into harm’s way, however.  The .32 cartridge just doesn’t have enough poop.  Lucky the most dangerous thing I have to shoot at is a paper target.

Grandma’s pistol is a family heirloom, and while it is none the worse for my firing of it, I will not make a practice of shooting it often.  One should approach the firing of an ancestor’s favorite firearm with caution.  It must be in shootable (good) condition, verifiable by a competent gunsmith, and one must ABSOLUTELY use the ammunition the arm was chambered to shoot.  There are many, many old cartridge designs, and it is entirely possible that a certain round might chamber, and even fire, in a gun designed for a different round.  This can have very serious results.  Then there is the question of the age of the ammo.  There is lots of old ammo around, and you would be surprised how old a cartridge can be and still fire in its intended gun.  But it is a maybe, maybe not proposition and I do not recommend it.  If you cannot get the right ammo for an old popper, you must let it rest in its drawer or case.

It is sobering to realize that any cartridge could be loaded with a powder-bullet combination that would explode its intended gun with possible injury to the shooter.  It is all a matter of the pressure generated by the burning powder when it is pushing the bullet out of the barrel. How do I know that modern ammo would be safe to shoot in any gun, modern or antique?  The Sporting Arms and Ammunition Manufacturers’ Association (SAAMI) is an organization to which the major guns and ammo manufacturers belong.  SAAMI has developed guidelines for the commercial loading of all pistol and rifle ammunition, and for each cartridge, these guidelines specify the maximum pressure that can safely be used.  The SAAMI guidelines take into account the fact that many old, and supposedly weak, guns are out in the big world.  Their pressure recommendations for older cartridges are therefore very conservative.  It is interesting to note that adherence to SAAMI specs by guns and ammo makers is entirely voluntary, but said makers are highly committed to the idea, and there have been few safety problems with factory ammunition.

For the .32 S&W Long, the SAAMI specs recommend a pressure that will launch a 98-grain lead bullet at a speed of 775 feet-per-second.  Companies may then use any powder-bullet combination they wish, so long as this pressure is not exceeded.  This is how I knew I would have a chance of shooting Grandma’s pistol safely.  Handloaders, that curious group of shooters dedicated to assembling their own ammo, might be tempted to stoke their rounds to get higher velocities (and power), but they should do so only if they will be using stronger, more modern guns.  I won’t be doing this with Grandma’s pistol.

*The primer (ignition pellet) is situated in the center of the end of the brass case.  Center-fire cartridges may be reloaded by replacing the spent primer with a new one, and, of course, with added powder and bullet.