The Lewis and Clark expedition reached the Pacific Ocean in the autumn of 1805.  Meriwether Lewis and William Clark had been commissioned by President Thomas Jefferson to explore an area in the recently completed Louisiana Purchase.  Specifically, they were to follow the Missouri river upstream from St. Louis and report on what they found, plants and animals, Indians, the terrain.  Most importantly, they were to search for a water route to the Pacific Ocean.  They hoped that at the headwaters of the Missouri an easy portage would take them to a navigable river going west.  They failed in this search because such does not exist.  The mountains are in the way.  Nevertheless, Lewis, Clark and the thirty or so hardy souls in their party made it to the ocean at the mouth of the Columbia River.

They never would have made it without their guns.  The principal arm they carried was (or was very similar to) the Harper’s Ferry Model of 1803, a flintlock with a rifled bore. It had a shorter barrel than the “Kentucky Rifle” that earned its fame in the eastern woods, and was therefore easier to manage, especially on horseback.  It fired a .54 inch round ball of pure lead using about 80 grains of black powder.  Meriwether Lewis had travelled to the Harper’s Ferry Armory in Virginia to acquire fifteen of these rifles for the use of the expedition.  They no doubt carried other arms also, but they are not well documented.  The Harper’s Ferry was an effective 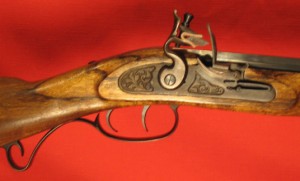 Modern replica of a flintlock, not a Harper's Ferry.

hunting weapon.  The explorers killed many deer, elk, buffalo, and other game in the course of their travels.  For this game, the 54-caliber lead ball worked pretty well, but it was not up the task of quick kills on grizzly bears, which the explorers encountered in impressive numbers in the northern territory.  Lewis and Clark and the others were at first curious about these great bears, which none of them had seen before, but their curiosity was satisfied rather quickly when repeated shots from their rifles would not stop them.  They learned that avoidance was the best policy.

The company that reached the Pacific included a young Indian girl named Sacagawea.  Sacagawea is one of the most appealing characters in the American story.  Part of the reason is that she participated in one of America’s greatest adventures, and part is due to the fact that our knowledge of her is limited, inviting our imaginations to become active.

Sacagawea was a Shoshone Indian who had been abducted by a rival tribe when she was twelve years old.  As time passed she joined the company of Charbonneau, a French-Canadian trapper who is generally referred to as her “husband.”  Lewis and Clark first encountered Sacagawea and Charbonneau at Fort Mandan, their wintering quarters of the previous year, near present-day Washburn, South Dakota.  Sacagawea was pregnant and in a short while went into a very difficult labor.  Meriwether Lewis was summoned to try to help.  He had heard or read about a treatment in which a concoction of powdered rattlesnake tails was used to ease labor.  Lewis managed to come up with some, administered it to Sacagawea, and shortly thereafter she brought forth a baby boy, to be known as Jean Baptiste Charbonneau.  When the expedition set out again in the spring of 1805, Sacagawea, Charbonneau, and little Jean Baptiste were included.  Lewis and Clark felt that Sacajawea would be useful when they came to Shoshone country because they knew they would need to trade for horses in order to continue their journey.

Sacagawea did not work any miracles on this trip, but all indications are that she did her part very well.  She heroically saved some important goods when a canoe overturned in rapids and she was instrumental in dealing with the Shoshone when they finally came in contact.  Lewis and Clark remarked that she was a sign of peace when they met new Indians, for the Indians knew that no war party would include a woman.  And remember, she must have carried little Jean Baptiste, who was only a few months old at the outset, all the way from South Dakota to the Pacific Coast, while helping with the everyday activities of the expedition.  Tell me what is not heroic about that.

Fort Clatsop was the name, after a local Indian tribe, that the explorers gave to their winter quarters on the coast.  Life at Fort Clatsop was miserable.  It was cold, it rained all the time, there was a plague of fleas, and the whiskey rations were gone.  Nevertheless, Christmas was celebrated when December 25 rolled around.  They used what little was at hand.  Lewis and Clark gave the troops silk handkerchiefs and divided the remaining tobacco.  Others gave gifts also, and it was recorded that Sacagawea gave William Clark two dozen white weasel tails.  Weasel tails?  Well, this raises all kinds of questions for me, for instance, where did Sacagawea get these tails and why did she give them to Clark and not to someone else, or several someones else?

The weasel, Mustela Erminata, I think, is found on many continents and was especially plentiful along the Lewis and Clark route.  They found them at Fort Mandan

and apparently sent some specimens back to President Jefferson.  This weasel, called a stoat in Europe, is red-brown in summer but changes to all-white in winter, except for the tip of the tail which remains dark.  Ermine is another name for the white weasel, and its fur, prized by royalty and the nobility for centuries for trimming their rich robes.

Where did Sacagawea get 24 white weasels?  I think she trapped them herself.  The expedition had already sent samples back east.  Why should busy explorers trap weasels for an Indian woman?  Then, why did she give them to Clark?  I wouldn’t go any further than to suggest that she had a great respect and fondness for him.  Lewis and Clark were both fine leaders, but perhaps Clark was a bit more approachable and less impatient than Lewis.  Clark had also served as the medical officer for the group and had treated Sacagawea during her illness on the trail.  That she gave anything at all to anyone suggests that she felt she was a full member of this great company.  There are other events of the journey that reinforce this suggestion.

Perhaps we all could, in our gift-giving, take a lesson from Sacagawea, who, in time of hardship, took something that she had and turned it into a great and loving present.  But I have one further question that I have never seen addressed in accounts of the Lewis-Clark adventure.  What happened to the two dozen pelts of the animals whose tails became Sacagawea’s gift?  No way to know for sure, but in my mind’s eye I see a one-year-old, French-Canadian-Indian boy, a prince of the American Frontier, wrapped in an ermine robe.

This entry was posted in Uncategorized. Bookmark the permalink.