You might think that a white pelican is a goofy looking bird, but in the air they are sheer perfection. With an incredible wingspan and matchless flying and diving ability, there is no bird I would rather see in the air. We have them at ATOTT headquarters in the fall and perhaps more in the spring.  It’s a good day when they show up. 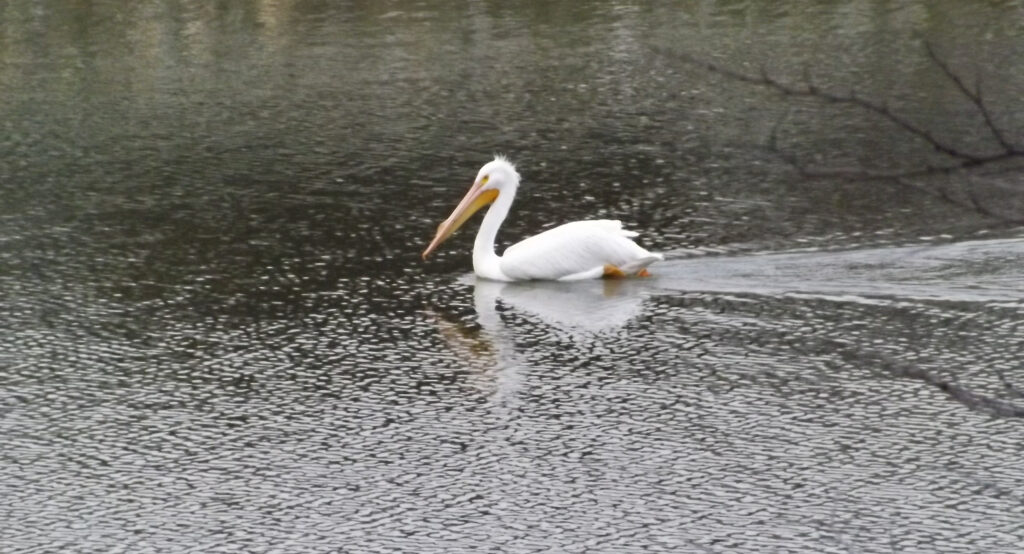 It has been a very long time since I have posted an article and there are various excuses involving family and health situations, difficulties in getting to the range, and the like, for which I am sorry.  The details would not make very good reading, so let me just say “here I am today with a post!

Just sitting in a chair does not end your interest in guns.  Now, Mine runs perhaps more to collecting than shooting, just a little, but it is as strong as ever. As time has passed, certain guns have caught my eye and demanded study, as always.  I would like to briefly share some of these with you and you can be sure you will see more on these in future posts.

Readers know of my regard for plain rifles and I have written about a number of them.  This one, not written about before, is the Stevens Model 325 .30-30.  One notices immediately its similarity to the Savage 340, about which I have written before.  Stevens was a first rate company in the 19th and early 20th centuries, specializing  in single shot rifles from simple boys rifles to sophisticated target guns. Their star was setting when Savage acquired the company  in 1920.  Savage has used Stevens as a venue for economical rifles and shotguns down to the present day.

The Stevens 325 appeared in 1947, two years after the end of World War II. The people of America, most of them in the armed services or involved in the war effort in some other way, were ready for more enjoyable pursuits, including hunting.  Few people had a lot of money so a low-cost bolt action was the ticket. The Stevens 325 kept cost down by using stamped parts for the bottom  metal, magazine, extractor and trigger housing.  The butter knife bolt handle probably does not make Mannlicher rifle fans jealous, but it is a strong, identifying feature of the 325.  This model was also the first Savage/Stevens to use the knurled nut to attach the barrel to the action and to set headspace, a practice that continues in Savage rifles to this day. The stock was wood, of course, sometimes walnut.

The Stevens 325 worked well enough to bring down deer at .30-30 ranges and was a successful product.  When minor improvements were made in 1950, the gun became the Savage 340.

In terms of availability and usage, the .25-20 Winchester  (aka .25 wcf) has been dead for years. It first appeared in 1895 as a chambering for the Winchester 92 lever action. It was made by necking down  the .32-20, a cartridge that had been around in the 1870s as a chambering for the Colt SAA and Winchester 73. Thus, the case has a shoulder and a long neck and takes a .257” bullet.  Over time it has been available in three loadings, using bullets of 60, 75, and 86 grains. The usual applications are small game and varmints. Deer were also taken, probably with the heavy bullet, but it could never be considered an effective deer round.  Confined as it was to small game and varmints, it lost out to the higher velocity .22 cartridges that appeared in the 1930s.

There is no doubt the Winchester 92 is an iconic rifle that would provide a lot of hunting fun in .25-20. However, a different rifle, a bolt action, caught my eye not long ago. This was a Savage Model 1923, and yes, that is the year of the design, now pushing the century mark. This rifle was part of the vanguard of bolt action, sporting rifles that appeared after World War I.  It was chambered eventually for .22 lr, .25-20 Wni, .32-20 Win and .22 Hornet, designated 23a through 23d, respectively.  The picture that follows shows a 23b, or .25-20 Win chambering.

Note that this is the dawn of sporting bolt action rifles.  The materials are walnut and steel, and the impression is one of very good quality manufacturing. The gun is fed by a removable magazine(clip). I think the most important  identifying feature is that a separate barrel is not attached to the action.  Rather the action is machined in an extension of the barrel, as one piece with it.  This feature was used on a number of different, early savage models and I believe they are the only company that ever used this method.

I find the 1923b works very well. I fired a box of Remington 86-grain loads and accuracy was good using just the simple open sights the gun came with.  I must say, however, that if you are a collector/shooter you should not get one of these without realizing the serious difficulty you will have in getting ammo and brass.  Remington and Winchester still list one load each, but they are seasonal manufacture and usually unavailable. If you do manage to find some it will cost you over $100 for a box of 50.  If you like the gun, it will be much easier to enjoy a 1923a, chambered in .22 long rifle.

For my own part, I have managed to scrounge about 100 pieces of brass and a couple hundred bullets of different weights. When warmer weather comes I will be able to give the 1923b a better evaluation.

You know that I like .410 shotguns and I have written about them.  Matter of fact, I just bought an Iver Johnson Champion single-barrel .410 in good condition and, my, it works well. I admit unashamedly that this love goes back to my boyhood.

The .410 has been much criticized in the past, especially as a beginner’s gun because of its small shot charge and poor patterning ability. There can be argument here. I generally think the .410 is underrated. But I would rather point out that the .410 has always been popular. The Guns International website has an entry in its index for .410 shotguns.  Click on that and tell me what you find. You wil see many .410 doubles in the $5,000 – 100,000 range? Granted, the most expensive usually have British workmanship (Holland & Holland, etc.) but it does not seem that a loser would have availability at this level.

Indeed, I understand there is currently a resurgence of .410 popularity.   Advertising shows any number of pumps, semiautos, over/unders, and side by sides, often for attractive prices.  One company even advertises a new single barrel .410 as a turkey gun!  Speaking of dreams of grandeur, YouTube has a number of posts about using a .410 for pheasants, ducks, geese, and even deer using the tiny .410 slug.  Come on, guys!

Clearly, if I am going to write new stuff, I have to find another small shotgun. That happened recently when I saw advertised a Stevens Model 101, an old, unusual small shotgun.  The Model 101 shotgun was based on the earlier Model 26 “Marksman,” a rimfire rifle.  Unlike most Stevens long guns, it has a lever actuated break open action, and not a lever falling block.

Steens 101 .44Stevens 101 with action open One source says it was made 1914- 1920, so any example is a centenarian.  The gun has a plain, straight wood stock and forend, a visible hammer, and a 26-inch barrel. Loosening a large screw at the forend next to the action allows the barrel to be removed. Commensurate with its age, this gun has little metal finish remaining and has wear in the wood. I would still say the condition is very good and it has a nice appearance. 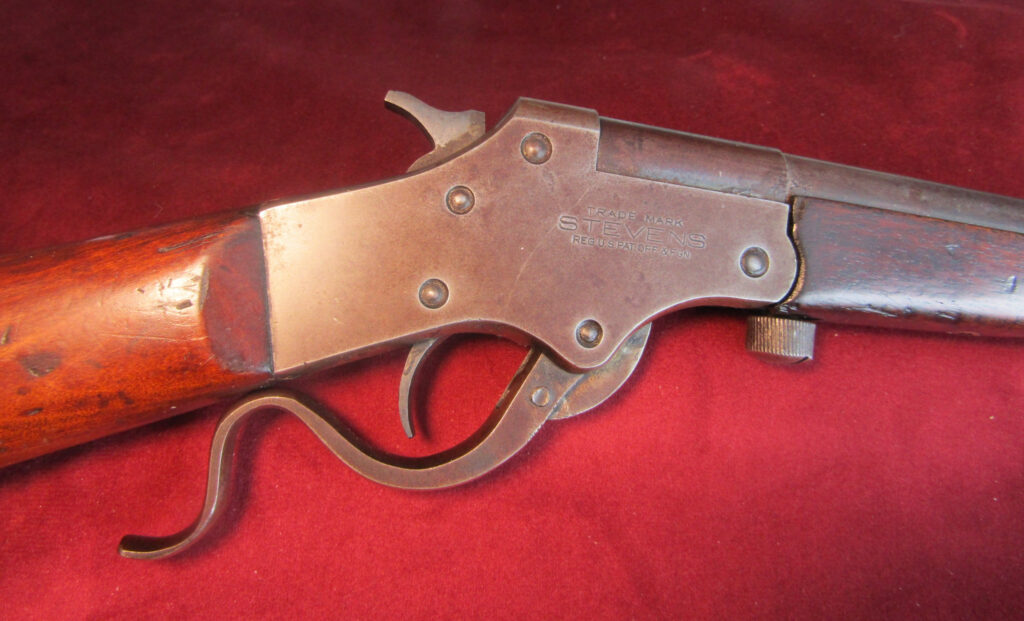 The interesting part is that it has a .44 caliber, smooth bore barrel and is chambered for the .44-40 Winchester brass cartridge.  Factory ammo was available for this type of gun.  It simply was loaded with a shot capsule instead of a bullet. Thus we have a small shotgun that will throw about ⅜ oz. of shot.  It could be effective as a garden gun and surely would roll rats, chipmunks and starlings at close range. But you are not going to buy readymade ammo for it.  I hope to investigate home cooked ammo for mine for a later report. 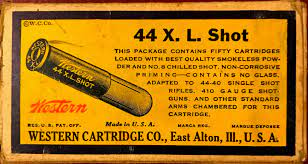 This entry was posted in Personal History and tagged Savage 23b, Stevens 101 .44 shot, Stevens 340. Bookmark the permalink.