This post describes accuracy modifications and shooting results for a Savage Model 40 Super Sporter in .30-30 Winchester.

The Savage Super Sporter Model 40 that I described in my post of June 15, 2016 was a plain rifle (circa 1935) that I liked a lot because of certain features.  It had a long, stiff tubular action and a bolt with locking lugs at the rear.  It operated smoothly and fed

cartridges without a hitch.  Accuracy was OK, considering the open iron sights, averaging about 2 MOA with factory loads.  Now, that’s not bad for an 85 year old plain rifle.  Part of that performance would be due to the action being comfortable in the stock.

A picture of the action channel shows contact of the tubular receiver just behind the recoil lug and in the tang area being smooth and shiny. That results from a good fit of the action and being held tightly by the action screws for fifty years or more.

The nature of the action and my work with another Savage rifle of this type suggested that this .30-30 might shoot better groups than I first observed. A couple of obvious changes were needed.

The sights are the most important accuracy component on a rifle. The standard blade and bead sights usually found on old, plain rifles are inadequate for precision shooting, especially for members of the very mature population (such as me).  Being products of the 1930s, these Savage rifles are not drilled and tapped for scope bases, but they are tapped for receiver sights.  I wanted a good aperture sight. 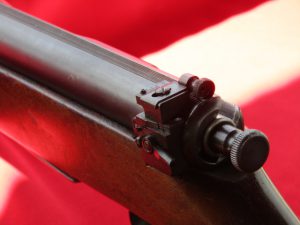 No new ones available, of course, but the Lyman Model 40 was made to fit the Super Sporter long ago.  I found one on eBay, the best place to look for old gun parts, for about $50.  Not bad because rarer sights for rarer rifles may run to $200 or more.  It pays to keep your eye on their offerings, because they turn over fairly rapidly and will be offered for different prices.

The Lyman 40 is made of steel and it fit and operated perfectly after I relieved the wood in the upper wrist to make room for the vertical rail.

The bedding of the action and barrel in the wood was the next thing to be considered. As noted earlier, the action seemed well supported.  The best thing for improvement seemed to be to float the barrel, which made contact with the barrel channel in a couple of places.  The picture shows the barrel channel with a tool that is very handy for the floating job. 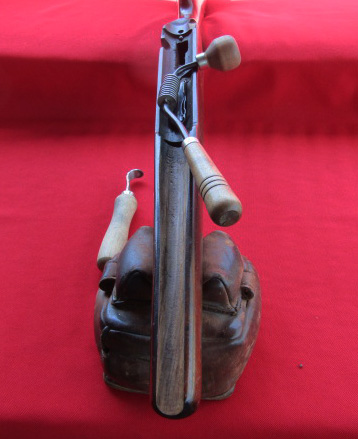 This is called the “Gunline Barrel Bedding” tool and you can get it at Brownells or Midway USA. It is not inexpensive but it is worth it for gun nuts.  You can guide it with two hands and it cuts smoothly and quickly.  The picture also shows a semicircular scraper blade that is often useful for bedding jobs.  I like to remove enough wood that a folded dollar bill will pass in the barrel channel from the end of the stock to a point about one inch in front of the recoil lug. 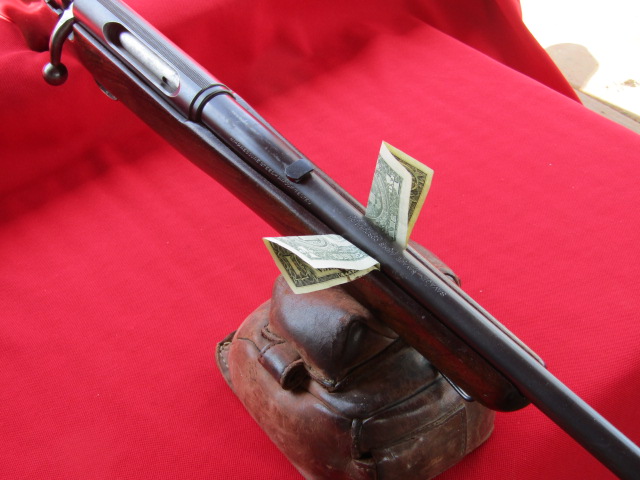 So we have two simple improvements: A floated barrel and an aperture sight.  I headed for the range with some factory ammo on a cool fall day.  The range is operated by the Missouri Conservation Dept and has very solid concrete benches (cold on your butt so bring a folded towel or pillow on a cool day) at 25, 50, and 100 yards.  I usually choose to shoot at 50 yds.  It is most efficient for reasons I have discussed in other posts.  The range does not have continuous supervision.  This I prefer because I don’t like a range so busy that you must shoot in relays and follow the orders of a range officer.  The people that use this one are good folks and we cooperate well in maintaining safe conditions.

I rest the rifle on a bench rest front support and a bunny ear bag for the stock at the rear. Of course, I try to be uniform in hold and trigger operation from shot to shot and do not allow the barrel to become hot.

The three targets with 7 groups shown here use the thick circle to center the front bead, with this image centered in the rear aperture. This sight picture gives good precision and repeatability. 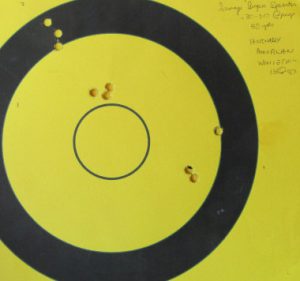 Top to bottom, the groups were fired with Hornady 150 grain American Whitetail, Remington 150 grain CorLokt SP, and Federal 150 grain SP.  The seven groups averaged 0.78 inches (1.58 MOA).  The smallest group measured 0.38 inch (0.76 MOA) while the largest hit 1.32 inch (2.64 MOA).  Clearly, the best performance in this limited trial was given by the Hornady American Whitetail, even though it had a dandy flier in one of the groups. 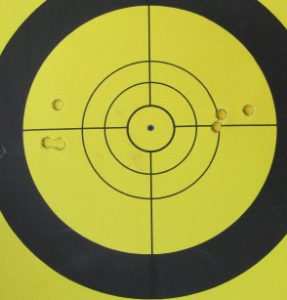 Compared with the tests of the original rifle in the earlier post, this SS gave smaller groups and was easier to shoot with precision. I conclude that the time spent on improving the rifle was worth expending. Zeroed at point of aim any of the ammo would be satisfactory for hunting.  Lesson learned:  If you find an old, plain rifle, finding and mounting an aperture sight will be possible and will give a real payoff. 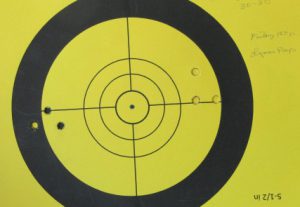