The year was 1925 and Calvin Coolidge was the President of the United States.  He was a man of few words; “Silent Cal” they called him, but he made a very famous statement that has been often quoted since his day.  Cal said “The chief business of the American people is business,” and America agreed. Good, growing business is the American way. Thus it was that Walter P. Chrysler established the Chrysler Motor Company in 1925.  Thus it was that Sears Roebuck, long in the mail order business, opened their first retail store in Chicago in that year.

And thus it was that Winchester Repeating Arms introduced their first bolt action rifle for sporting use in 1925.  This rifle, called the Model 54, was among the first factory bolt action rifles whose sole, intended use was the hunting of game animals.  I say among the first because the Model 54 was predated slightly by the Savage Model 1920, a much less well-known rifle of bolt action design, and by the Remington Model 30, essentially a sporterized version of the Enfield Pattern 1917 military rifle.

Bolt action rifles for military use had taken over the European scene in the late 1800s.  The Mauser brothers and their company led the way with a steady succession of improved models, and reached their zenith with the Mauser Model of 1898.  War was a popular activity in the 19th century and many countries decided they needed Mausers, and used them, not only in Europe, but in Asia and South America as well.

The U. S. Army was a bit late to the military bolt action game.  It had adopted the Krag-Jorgensen, a .30-caliber bolt action rifle in 1892, but it proved to be quite good at every rifle application except infantry use, or so the brass thought.  They junked the Krag in favor of the 1903 Springfield, a bolt action rifle based on the 1898 Mauser. The Springfield and its famous .30-06 cartridge was a great success. It was used in both world wars, rather lightly in World War II because it was replaced by the M1 Garand.

Military actions were strong, efficient, and reliable, exactly the bones you also want in a rifle for hunting big game.  The first bolt actions for hunting were therefore military rifles, either originals or sporterized versions. One can still find used examples of sporterized Mausers, Krags, 1903 Springfields and 1917 Enfields in the used gun venues.  With many returning veterans interested in outdoor sports it was sure that the bolt action rifle would attract the attention of sporting arms producers.

It is not surprising that the first actions of bolt sporting rifles were adaptations of military precursors.  The military rifles were strong, reliable designs that could be produced in high quality. Thus the Winchester Model 54 design is rooted in the design of the Springfield Model of 1903, that, in turn, is rooted in the design of the Mauser Model of 1898.  The Mauser/Springfield action is very strong and its salient feature is the bolt design. There are two opposed locking lugs at the front and a long, non-rotating extractor with a large claw that captured the cartridge as it came up from the magazine. This prevented a jam if the bolt were withdrawn before the cartridge was fully seated.  This became known as “controlled round feeding” and soon was considered a necessity for the safe hunting of dangerous game.

My Winchester Model 54 came to me as the result of a successful internet transaction.  A fairly early iteration of the model, it was made in 1929.

In the pictures you can see the extractor lying along the side of the bolt, and, overall, the rifle has a slender configuration reminiscent of the slightly earlier Savage Model of 1920.  The stock is straight-grain walnut with nice bordered checkering, a steel butt plate with no logo, and no grip cap. The barrel is 24 inches and is chambered for the .30 WCF.  The Model 54 was offered in a wide variety of chamberings.  the .30-06 Springield is the most common.  The 54 was also the first rifle chambered for the .270 Winchester and that is common.  The .30-30 is a much less common item. The bore of my example is excellent.  The front sight is a bead on a blade that is pinned in a boss on the barrel. The rear sight is a deep “V”, adjustable for elevation, mounted to the receiver. The sturdy, stamped bottom metal has the trigger guard and the box magazine cover in a single unit.  Removing the action shows that the inletting of the stock wood, and therefore the fit of metal to wood, is of very high quality. A large flat area on the bottom of the action has good contact with the wood just behind the recoil lug. This no doubt contributes to the 54’s reputation for high accuracy.

The Mauser style bolt is shown in the next pic.  It is flanked by a bolt from a Remington 788 .30-30 on the left and from a Savage Super Sporter .30-30 on the right.  Three different ways to control the rimmed .30-30 round in a bolt action rifle.  The robust extractor and groove for the ejector is evident in the Model 54 bolt and it is the only one that operates with controlled round feeding. 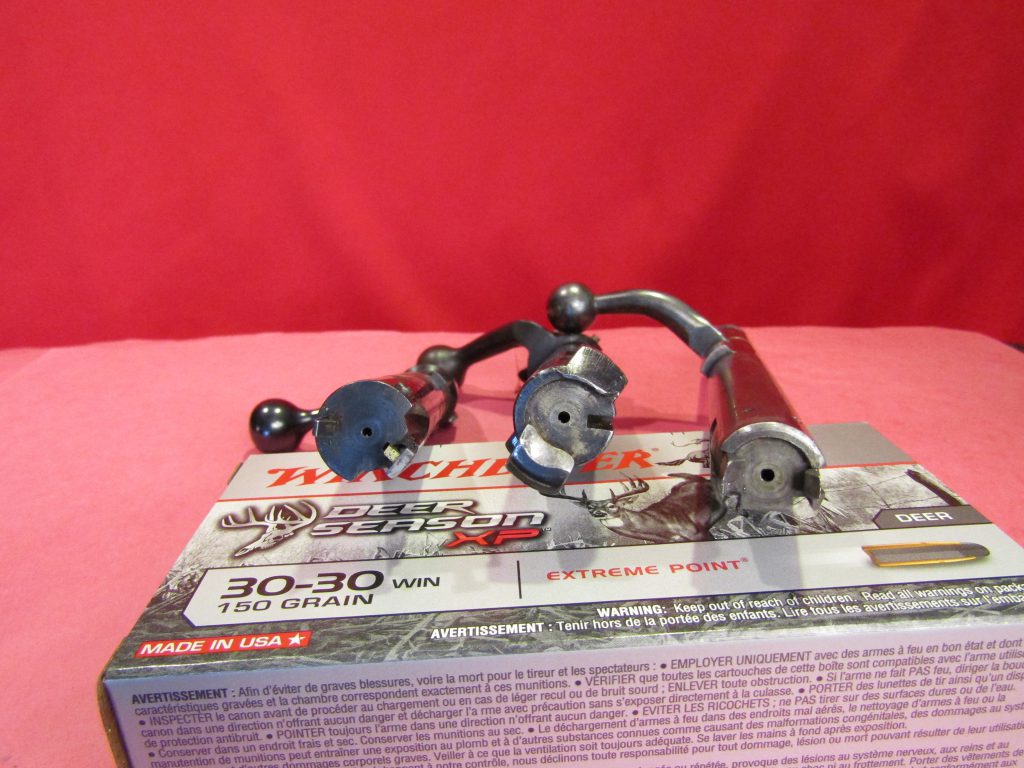 The action is shown in the following picture. A sturdy recoil lug is at the front and it is held by the front action screw.  Thick rails extend to the rear of the bridge and have openings for the magazine and loading/ejection port. There is a second action screw behind the magazine and a third in the tang.  The trigger seems to be a military type.

Note there is a boss in the barrel that held the original blade rear sight.  This boss is held by a screw though the forearm. Thus, with screws through the bottom metal at each end 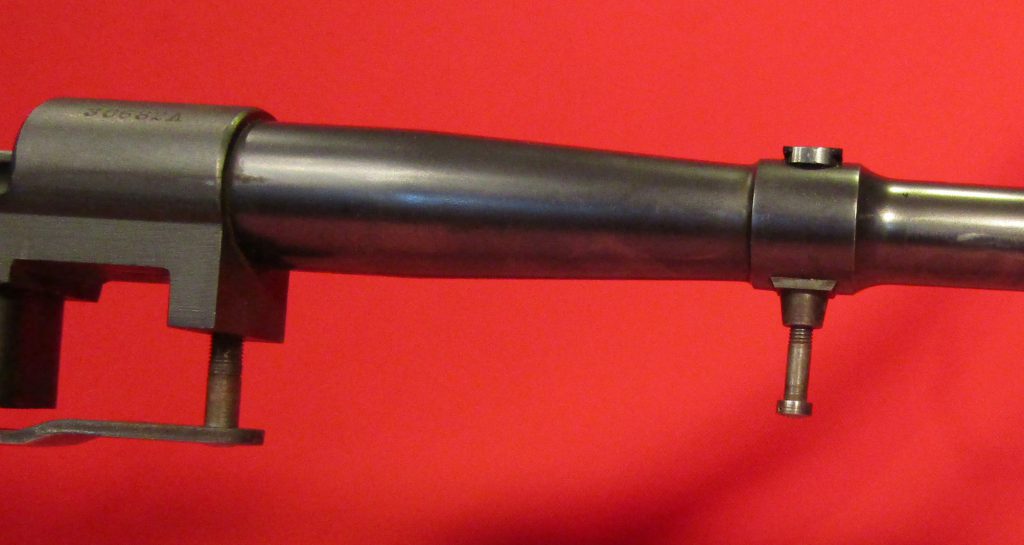 and in the middle behind the magazine box, there are four screws that hold the metal to the stock.  The metal finish on this rifle is in very good condition. The wood has most of its original finish with a few minor marks.

There were several grades of the 54 offered and mine is the standard grade.  It is an earlier model that had a Schnabel tip. This was later changed and the rifle was given a thicker forearm, similar to the Model 70 that followed in 1936.  Something over 50,000 rifles were produced over the 54’s lifetime.

My 54 had a couple other idiosyncracies as it came to me..  The barrel boss had the rear sight removed and replaced with a narrow, dovetail scope base.  This is because the 54 was not drilled and tapped for a scope base in the receiver bridge. Remember, this was the early days of bolt action sporters.  To have two bases, the rear base is attached to the receiver ring using the taps that were supplied with the rifle. This must have been unsatisfactory but was necessary for the bolt to clear the scope on opening.  I have no clue what the previous owner must have used for a scope.  I removed this base as I planned for installation of a receiver sight.

The other anomaly was the tacky-looking leather cover on the end of the forearm.  Removal showed that the tip had a longitudinal crack and the original Schnabel tip had been crudely sanded off.  I repaired the crack with brown epoxy, smoothed the tip, and finished it to match the stock. Best I could do, but not good for the collector value of the piece.  However, there appear to be no other alterations of the rifle, making it a good example of the type. It is an honest gun with pleasing appearance.

Sights are the major concern when anticipating accurate shooting with a rifle such as this. It was not set up for easy scope mounting so I replaced the V-rear with a used Lyman aperture made for the Win 54. 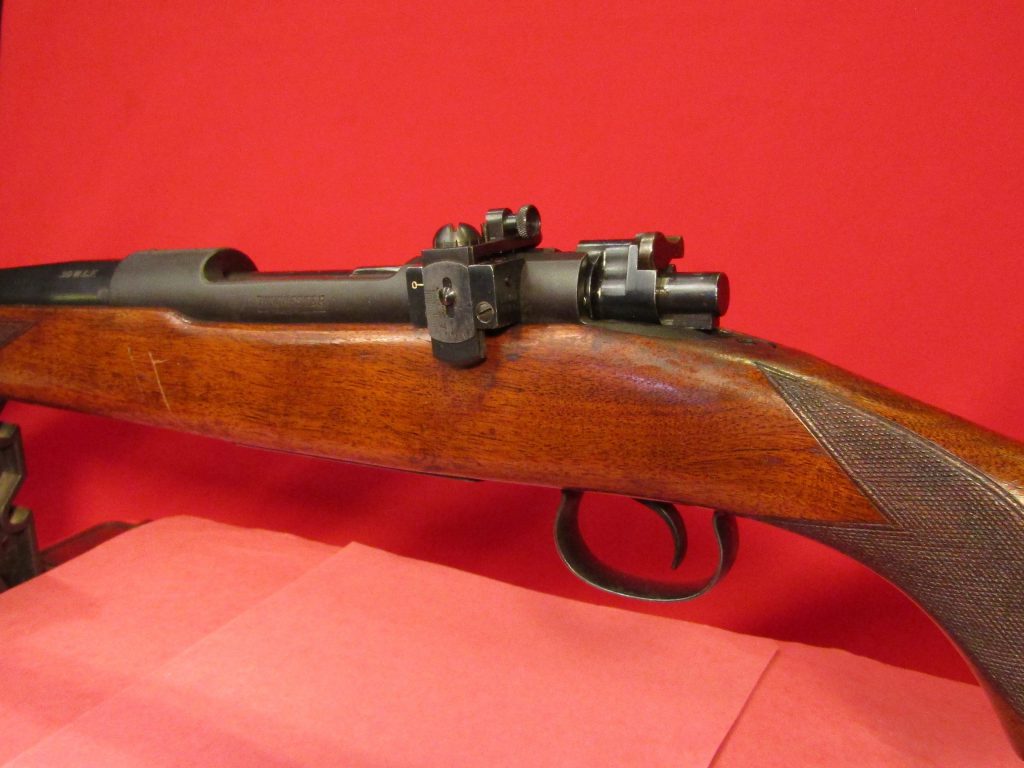 The bedding of the barrel in the stock is also of prime importance, especially when the barrel has a boss that is held to the foreend by a screw.  Accuracy and point of impact can be affected by the fit of the boss and the tension of the screw. Inspection showed that the

barrel contacted the stock channel in several places so I decided to shim the action with half inch lead tape just behind the recoil lug and on either side of the barrel boss. This allowed me to raise the action a bit without removing any wood or disturbing the fit of the action in the stock.  That could come later, if needed. Previous experience suggested that the barrel screw should be snug, but not tight,so that is where I set it.

I shot three shot groups from a solid rest at fifty yards using a variety of factory ammo.  I 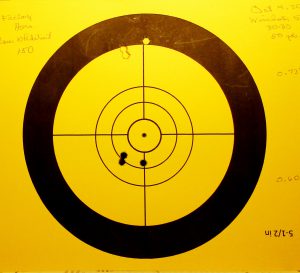 used a ring target, as shown in the pictures below. With a diameter of 5.5 to 6.0 inches the ring is an excellent field for centering a round bead used with a rear aperture.  It is precise and repeatable so precision shooting is possible. Groups measured in the range of 0.4 – 0.9” or 0.8 – 1.8 Minute of angle.  Two groups each for Hornady American Whitetail 150 gr and Winchester Deer 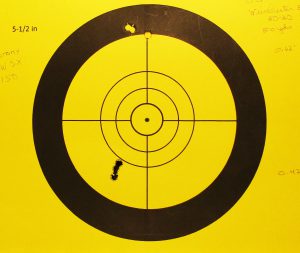 Season 150 gr are shown.  The Winchester 54 is thus capable of very accurate shooting and I expected nothing less based on my experience with other bolt action 30-30s, and it is an indication of the general capability of Winchester Model 54 rifles, regardless of caliber.  If you needed a bolt action rifle and bought a Model 54 in the 1920s, you bought a good one. If you find one on the used rack today it will probably be a good one but will likely be a .30-06. They were built to last.

However, the 54 was marketed for only 12 years because it paved the way for the Winchester Model 70 that appeared in 1937.  The Model 70 could be considered to be an improved Model 54 and it had a longer run, but that is another story.