Need ammo for your 30-30? If you check Midway USA’s current web page you will find 38 different products listed.  Not bad for a cartridge that is more than 120 years old. And I think you could take a deer with almost every one of them.

So who needs help choosing deer ammo for their double thirty? I am not sure but we will find out because we have entered the age of dedicated marketing.  The box you formerly chose for deer might simply have said “150 grain Round Nose.”   Now, from several makers, the box will tell you plainly that you should use the load for deer.  We will describe the products and give some results of shooting each of them.

Offerings of this type come from Hornady, Winchester, and Federal. Hornady calls theirs “American Whitetail.”  Winchester’s offering is “Deer Season XP,” and Federal’s is “Non-typical Whitetail.”  Take a look.

In box design the Hornady is perhaps the winner.  It is certainly the most patriotic with “American” in the name on a background of Old Glory. The Winchester is more conventional with the usual Winchester logo and a fat, 10-point buck in the picture.  The Federal has a surreal flavor with a very nontypical skull rack but Federal also gets the American flag on a corner of the box..  All three are quite eye-catching and attractive. 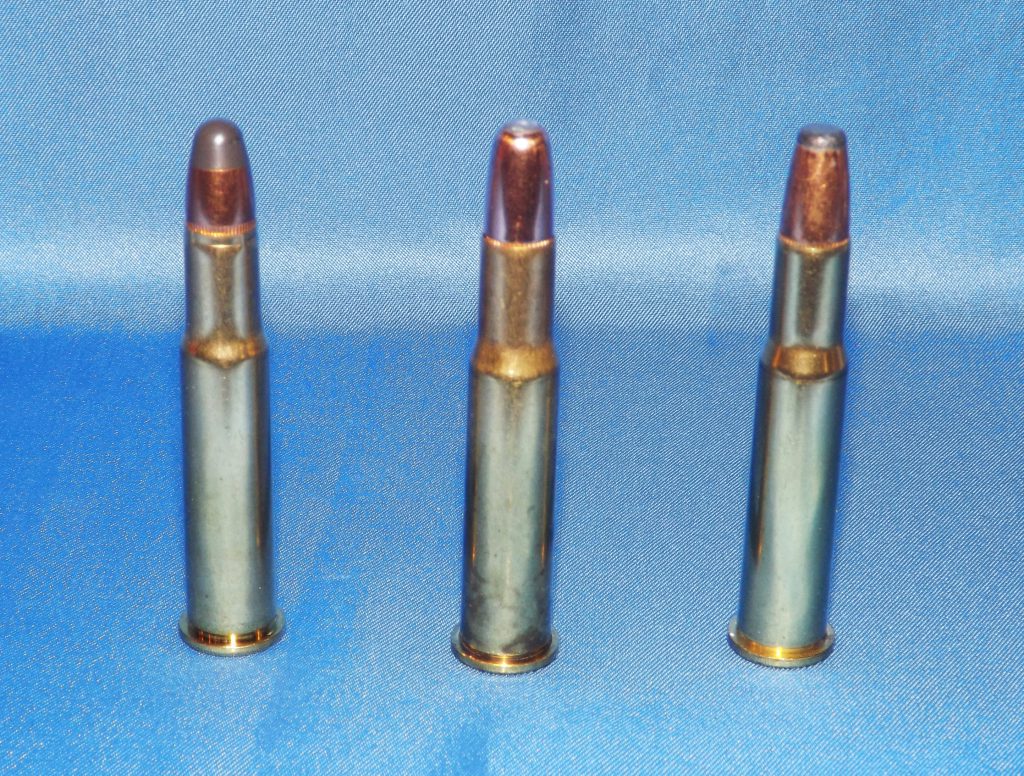 The loading is conventional, all three with 150-gr bullets loaded to the nominal .30-30 velocity of 2390 fps for a 24-in barrel.  The bullet designs make the talking points.  Hornady uses a round nose version of their famous interlock bullet and the resulting ammo “combines generations of ballistic know-how with modern components……”.  The Federal uses a familiar flat point design which they say “uses an optimized soft point bullet with a concentric jacket to provide tag punching accuracy and consistent, lethal wound channels.”  The Winchester bullet seems most notable with a “large diameter polymer tip (that) accelerates expansion resulting in rapid impact trauma.”  It is combined with a tapered jacket and alloyed lead core.  The tip is indeed quite large and round, almost enough to make a circus clown jealous.

I can’t tell you which of these bullets would be the best killer of deer. My prediction is that not much difference will be found, but you will have to try out one or more of them, and when you drop your deer please send me an email to describe your results.

Apparently, Remington has not entered this marketing game. There are no deer-specific boxes for the .30-30 or any other caliber in their online catalog.  Remington fans need not stay home, however, because the staid, old Inter-Lock loads are available in 150- and 170-gr versions.

The rifles used for ammo testing are tried and true sporters that I have used in other projects. I trust them to give me reliable information. The Henry Model H009 steel lever action is an attractive, well-made performer that regularly groups 1.5 MOA, but I have shot many groups smaller than this.  It fills the bill for folks who want to see how a lever action rifle does with these loads.

My Remington 788 bolt action is my go-to gun when I want to see just how accurate a certain .30-30 load is. I have epoxy bedded the gun and it is a one MOA rifle on any day at the shooting bench.

Bullet speeds were measured with a ProChrono chronograph set up 10 feet from the muzzle. The day was sunny at about 80 deg.  The data given are based on strings of at least 10 shots for each entry and are averages for the strings as calculated by the chronograph.

I did not expect any big surprises to show up in the velocities and none did. All met the modest expectations for .30-30 standard loads.  Worth noting is the strong speed shown by the Federal ammo in the Model 788’s 22-inch barrel.  Also eyecatching is the Hornady American Whitetail giving a higher velocity in the 20-inch Henry than in the 22-inch Remington.

All examples will provide deer killing energy at the usual .modest 30-30 ranges.

I used a bench rest to fire three shot groups at 50 yards. I like four shot groups better for accuracy evaluation, but, hey, this is ammo for hunting and it is expensive.  Three shots it is!  I fired a total of 28 groups for the three kinds of ammo in the two rifles.  Here is a table of results.

Yes, I think we have very good results here for accuracy of factory ammo. The largest groups averaging 2.12 minutes-of-angle were given by the Federal in the Henry, but 2 MOA has always been considered good performance for deer hunting at .30-30 ranges, and the Henry did better than that with the other two loads. 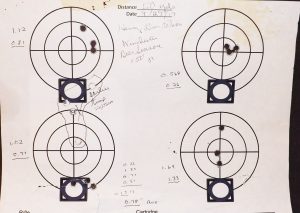 Groups from Winchester Deer Season with the Henry

The Hornady American Whitetail was spectacular in the Remington with three consecutive groups averaging 0.68 MOA (with one group of 0.5 MOA). The picture is convincing, but I still want to verify and add to these results on another trip to the range.  Within these two extremes the other groups fell in the 1.4 – 1.8 range. 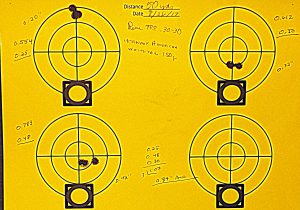 The Federal NonTypical gave the second best group average when fired from the Remington 788. 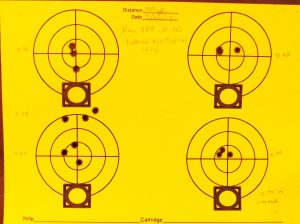 So, if you have a favorite ammo company

among the three tested here, you can stick with it. The deer hunting market is large and the makers have to be competitive.  America is a great country.