This post describes a few results of doing something no shotgun expert would recommend for hunting, namely, using No. 4 shot in the .410 shotgun. 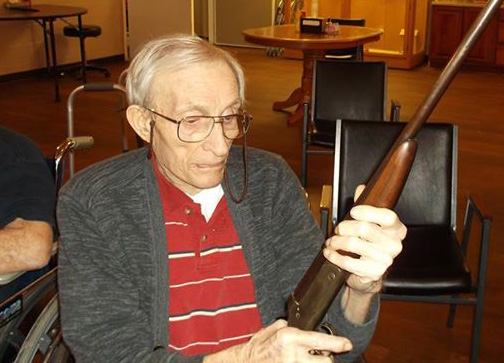 The picture shows my father, at advanced age, holding the .410 that he used as a youngster.  It is a “Hercules” from Montgomery Ward.  His comment that day was “Man, I wonder how many miles I carried this thing when I was running my trap lines.”

My father was in the last generation that could make a living on 160 acres, even when sharing half the grain with the landlord, who always got every ear of corn coming to him.  Dad had a formidable aptitude for hard work.  We had plenty to eat, good clothes, and an occasional new car or tractor.  My sister and I went to good colleges.  Smart pig raising contributed to this, but those days are gone forever.

Dad has also been gone a while now but he is not absent from the hearts and minds of folks in my family, most of all, me.  He told me many things and gave me much advice, as a good parent usually does for education of the offspring.  This has been of great value to me.  One of the lighter things he told me was the following:

“If you are going after rabbits or squirrels with a .410 you should use No. 4 shot!”

This, like most of dad’s advice, was based on experience, in this case I believe a lucky shot on a rabbit at range, maybe 30-35 yards when a single No. 4 pellet in the head dropped the luckless bunny.  It may have happened more than once but I’ll bet not many times.

Dad showed me how to shoot a shotgun with this family .410 single barrel.  As I grew, became more interested in guns and began to read a lot, I found that no shotgun writer would agree with my pop.  To most hunting journalists the .410 was little more than a toy, albeit a dangerous one.  The shot charge was too small and the long shot column in the small bore caused damage to a lot of pellets which then went astray.  The .410’s shot pattern was therefore small, ragged and thin, even at close range.  Shooting skeet with a .410 worked with tiny No. 9 shot, but if one absolutely had to go forth after game in the field with a .410 then shot no larger than No. 7-1/2 should be used.  Only a nincompoop would go forth with a load of No.4s.  This expert advice applied to both of the available .410 loads, the ½-oz and the ¾-oz.  This made sense to me because there are only 67 No. 4 shot in a ½-oz. load.  There are 173 No. 7-1/2 shot in the same weight and of course that would give a pattern of greater density.

But I chose not to argue with dad.  If a guy who can butcher a hog or overhaul a Farmall in his spare time tells you something, it just might be good.  So, we always had a box of No. 4 loads around the farmstead.  I slayed a few skunks, possums, and even ground squirrels with them and I saw dad drop a few fox squirrels out of trees during our regular fall trips to the hardwoods.  Why worry?  Then there was the warm summer night when dad, holding a flashlight under the barrel, took five small racoons out of the mulberry tree.  Close range, yes, but No.4 shot had something to do with it, too.

Now, many years later with me enjoying a flexible schedule, I wanted to return to some .410 shooting.  If anything, the .410 shotgun has regained popularity in recent times and one can find loads with No. 4 shot on many store shelves. The interest in the .410 as an arm for self defense has helped to motivate this.  Among specialty defense arms we have pump shotguns and the Taurus Judge, a chunk of a revolver that digests .45 Colt and .410 shells for defense.  Thus, .410 shells are now readily available with larger shot sizes, even buck shot. 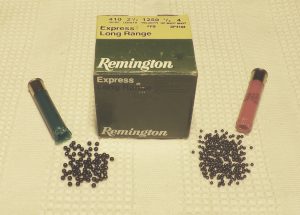 I really enjoy patterning shotgun shells.  Patterns show you how you might do with bird or bunny.  Recognizing the limits of the .410 I started by blasting a big piece of cardboard at 16 yards.   The circle drawn around the pattern is 10” in diameter and it shows that just about all of the pellets fell within it.  There are 72 hits and that is a few more pellets than there should be in a half oz. of 4s.  I guess the Remington shells have a few more thrown in for good measure.  The pattern centered a bit higher than my hand drawn aiming point but there are still 24 hits in the aiming circle.  This pattern would be deadly on a game animal or bird, say, a pheasant, which would be destroyed. So we can say that 16 yards is too close, even for a light .410 load with large shot. 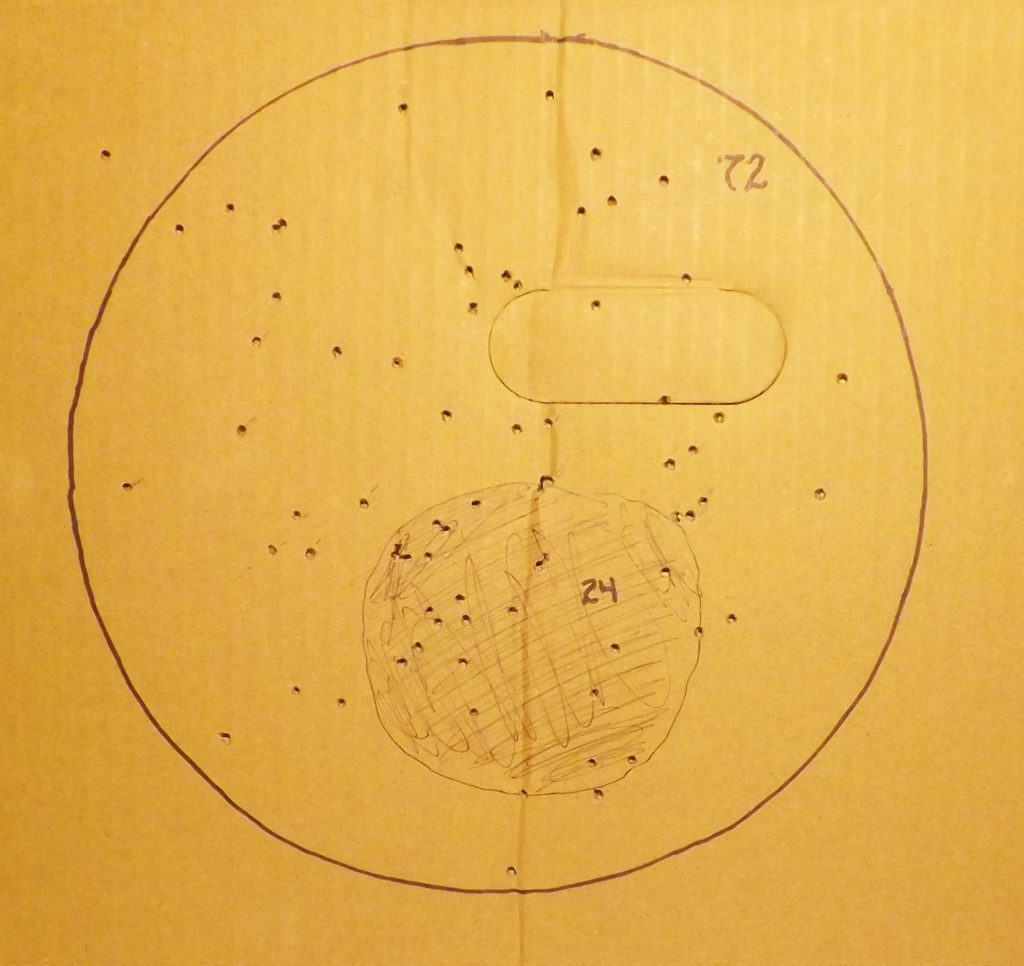 Pattern of half ounce of No.4 shot at 16 yards

The next picture shows the result of a shot at a squirrel target at 16 yards.  The squirrel in the target is actually a bit smaller than a real squirrel would be and I still did not get the pattern centered on him.  Nevertheless, there are at least 12 shot pellets that would do damage and four of them are in the head.  I don’t think dad would have been happy with this many hits in his stew candidate. 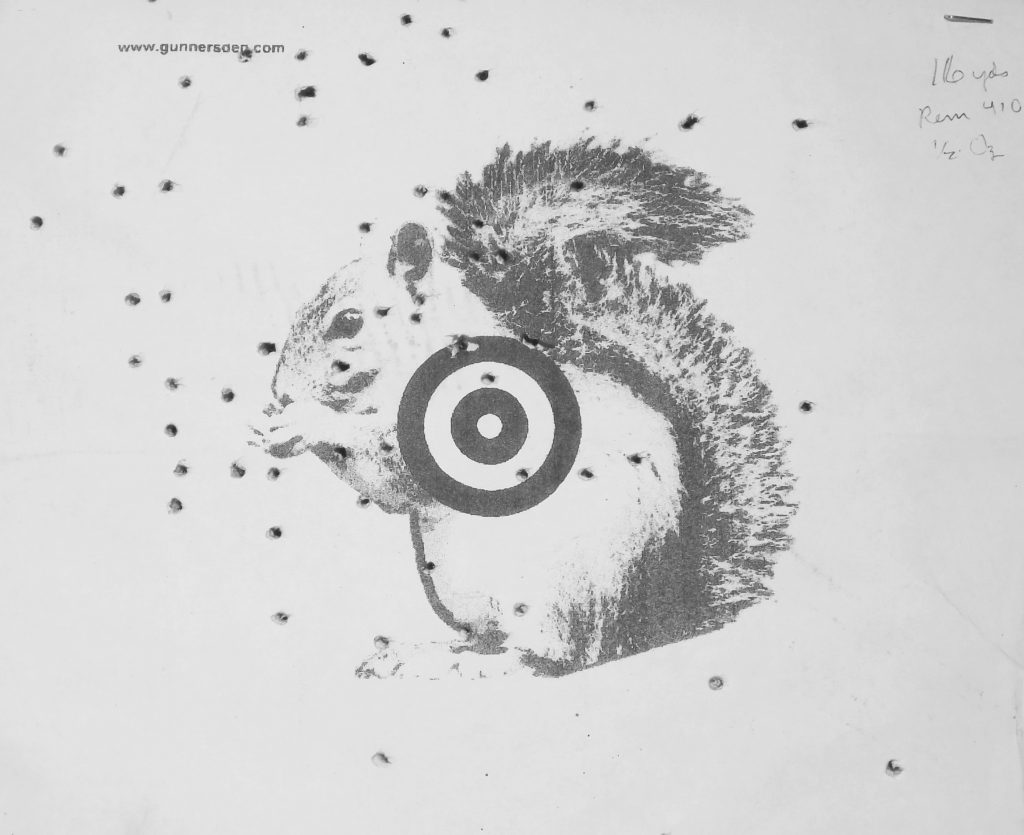 Squirrel catching a half-ounce of No. 4s

However, as one moves back from the target the pattern of No. 4s quickly thins out and develops bare spots.  At 21 yards the 10” circle had only about half the hits that it did at 16 yards and there were several 2 to 3 inch holes, that is, areas with no hits at all.  But again, a squirrel target had seven hits, all in the body.  That squirrel would have been dead.

At 26 yards the load produced something that really did not look like a pattern, being very thin and patchy.  I was, however, again confounded by the fact that a squirrel target in the pattern had five hits at this distance, three of them very solid, that would have done him in.  Twenty-six yards is 78 feet and that would be the top of a tall hardwood here in the Midwest.  With this pattern Dad could drop a squirrel high in a tree, assuming a good part of nutsy’s body was accessible.  That is not always the case.

Of course, possessed of family loyalty, I like to think that dad had a point.  He had his experience and I have my patterns with dead squirrels on paper.  That amounts to some objective evidence.

The experts, however, are not wrong.  The patterns of light .410 loads become thin very quickly.  I think my patterns show that the .410 pattern has a lethal span of about 10 yards.  You can certainly give your chances a boost by using the .410 ¾ oz. load (actually, 11/16 oz. from most makers) with shot in the No. 6 or No. 7-1/2 sizes.  This is especially important for birds as they can cover the 10 yard span of lethality very quickly.

And, get plenty of practice because it is going to be a real challenge regardless of load! 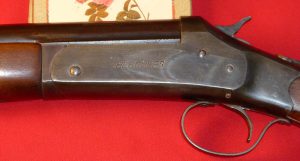 This entry was posted in Personal History, Shotguns and tagged .410 shotgun, .410 shotgun for squirrels, .410 with No. 4 shot, single barrel .410. Bookmark the permalink.