This post describes the design and performance of a Thompson/Center G2 Contender equipped with a .32 S&W Long barrel made by Match Grade Machine of Hurricane, Utah.

But first, I have to present my annual, winter bald eagle picture.  This Mr. Baldy perched in a hardwood by the house at ATOTT Headquarters.  I believe he is thinking about moving because there is no open water left in the frozen bay.  I am no nature photographer but I try.  This was taken with a Fuji FinePix 4500 (14 mega pixels) with lens at about 30X zoom, hand held through the glass of our front door.  The image stabilizer removed most of my shaking so the image is not too bad. 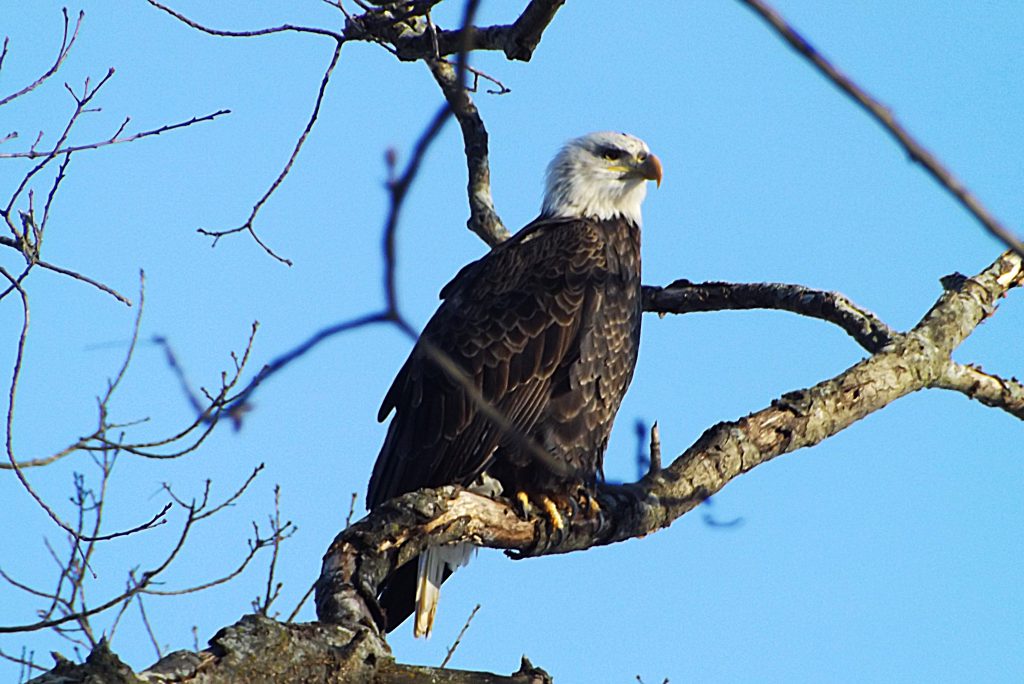 Master of all he surveys

The T/C Contender is a visible hammer, break-open, single shot pistol that appeared in 1967.  It was invented by Warren Center while he was working for the K. W. Thompson Tool Co. which then manufactured the pistol for sale.  Primarily a hunting arm, the Contender enjoyed some popularity and the Thompson Center line expanded to include a carbine and a stronger action for powerful cartridges that could be had in pistol or rifle configuration.  The original Contender action was replaced by the improved G2 model in 1998.  The company was bought by Smith and Wesson in 2007 and production was moved to Springfield, Massachusetts.  The Contender disappeared from the market for a few years during the gun market craziness that attended certain governmental administrations.  The G2 Contender and other single shot T/C products reappeared in 2015 when one could again buy a Contender pistol or carbine.

The versatility of the Contender owes to the possibility of using interchangeable barrels to shoot different calibers with one action.  Rimfire and centerfire cartridges are both possible because of the Contender’s clever, hammer-mounted firing pin combo.  Thus, you may fire the .17 HMR or the .44 Remington Magnum, and most everything in between, from the same action by using easily interchangeable barrels.  The sights, optical or metallic, remain attached to the barrels so resighting is not necessary when changing to a new caliber.  That has a lot of appeal.

I purchased my G2 Contender pistol with walnut stock and a 12-inch barrel in .22 rimfire.  My supplier was the E. Arthur Brown Company, an outfit that lists a lot of products by T/C, Ruger, and others.  I found EABCo very good to deal with.  Since I wanted to work with the .32 S & W Long I immediately began to look for a company that could supply Contender barrels in custom chamberings.  Cartridges like the 32 Long are simply too obscure for production of factory barrels.  Lucky for me I found my desired barrel could be made and supplied by Match Grade Machine of Hurricane, Utah.  At their web site it is easy to design and order the barrel you want.  This company provides an excellent product and they shipped mine in about four weeks.  Outstanding!  A visit to their web site will show that the company can supply barrels in many chamberings for all models of T/C pistols and carbines.  A picture of the barrel sent to me follows.  Note that this bull barrel has the optional scope base for Weaver rings.  Note also the large hole in the front of the lug that admits the pin used to attach the barrel to the action

The EABCo will do an extra-cost action job on your T/C frame if you so specify.  One may well ask why one needs to pay for an action job to get a good trigger on a gun as expensive as a G2 Contender.  My thought is that many parts in today’s manufacturing world are milled on CNC machines.  These machines are so precise that parts produced on them are fully interchangeable and easily assembled into a finished gun.  However, these parts may not mesh quite as well as in the good old days when some hand finishing was used.  Hence, the need for additional tuning to get a fine trigger.  I paid the price and I am happy with the result.  My Contender operates smoothly and the trigger is light and crisp.

In the picture with the hammer cocked you can see the hammer pin set for centerfire operation.  Turning the lever on top of the hammer will set the pin higher for rimfire operation.  It would be difficult to think of a simpler method for allowing both types of operation in the same pistol. 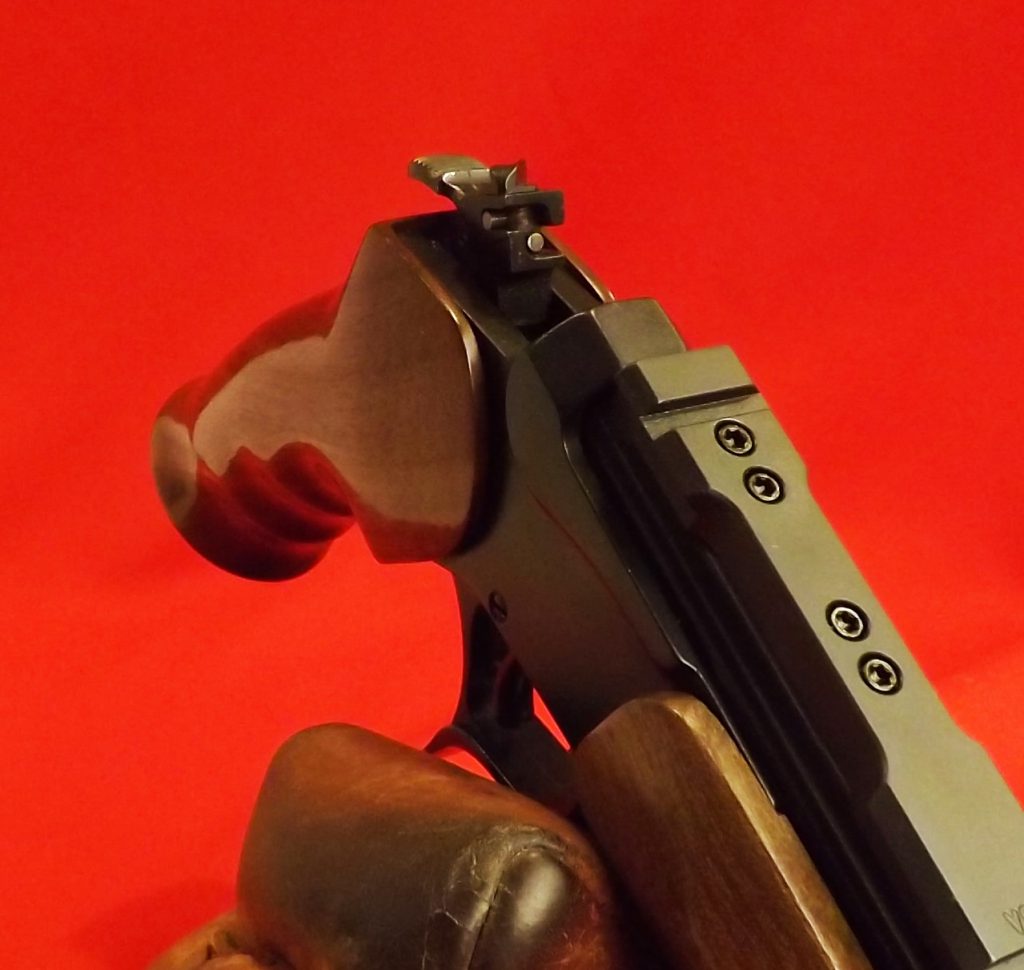 The next picture shows the assembled pistol with a Leupold 2X handgun scope installed.  This is the weapon that went to the range with me for testing factory ammo and a few handloads, primarily at 25 yards. 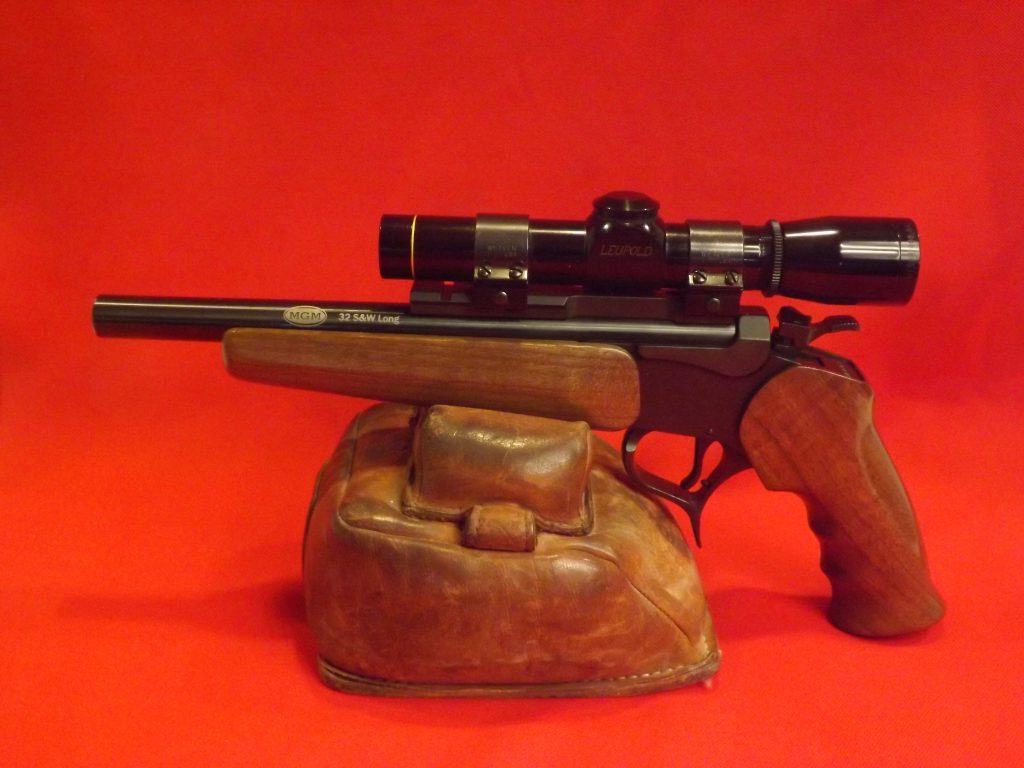 It Is A Long Barrel

At 10 inches the MGM barrel is quite long compared with a barrel on the usual .32 revolver.  Most common on a wheelgun is 4 inches, as on an S & W Model 30/31 or a Colt Police Positive, these revolvers being pocket pistols.  A few 5- and six-inch barrels may be encountered.  Thus, my T/C outfit should show comparatively high velocities in comparison.  Velocity results for ten-shot strings came out like this:

These velocities might prompt me to sing a couple choruses of “Happy Days Are Here Again!”  They are really quite satisfying.  The Remington and Magtech factory loads give about 100 -150 fps higher velocity than they would from a four inch barrel.  The Sellier and Bellot is astounding from the 10-inch MGM and I will have more to say about that later. 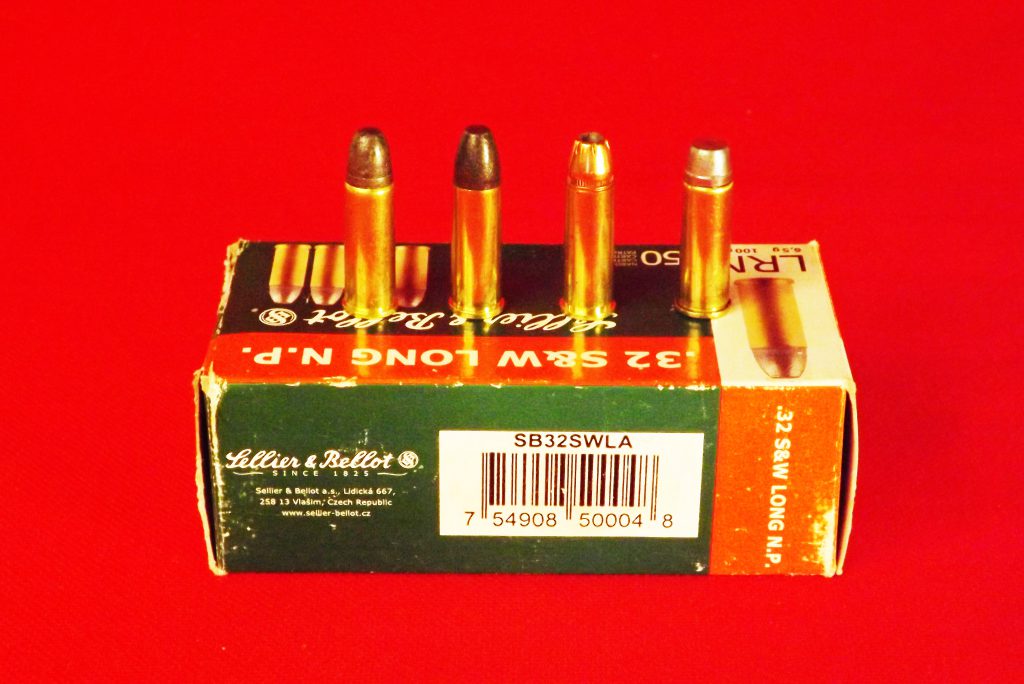 But Could I Hit Anything With It?

What a downer it would be to have to report poor accuracy, but I do not need to because the gun shows target grade accuracy.  The barrel, as shown in the pictures, is heavy.  The trigger is crisp and light at about three pounds and the 2X Leupold scope does its job well.  You could fire the pistol offhand with a two-hand hold if it did not take too long to break the shot but I shot over sandbags for my group shooting.

Best accuracy results were obtained with handloads using the lighter jacketed bullets.  The picture shows two groups shot at 25 yards, one using Hornady’s 85 gr XTP and one with Sierra’s 90 gr HP.  I must say that I have not done enough handloading and shooting yet in order to reliably pick winners.  The Sierra and Hornady perform about the same here and both will be capable of consistent 25-yd groups under an inch.  The Hornady 100 gr XTP handload, which sped away at 1068 fps, did not do quite as well as the 85 grainer. 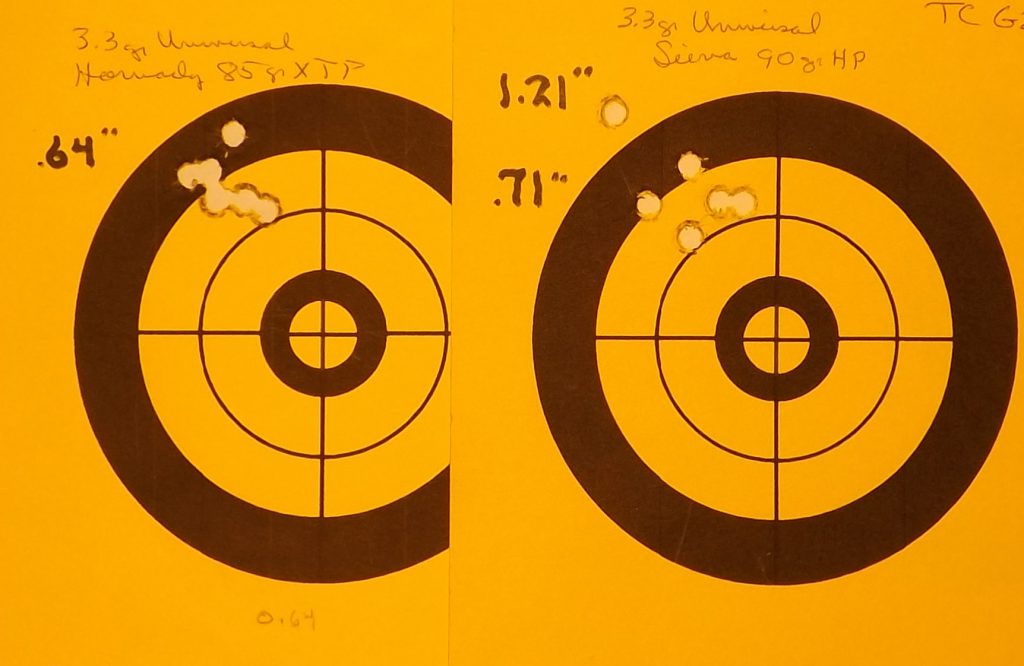 The Remington and Magtech factory loads were so-so with groups being a bit less than 2 inches.

Sellier & Bellot is a manufacturer of cartridge ammunition located in the Czech Republic.  The company is owned by CBC, a Brazilian company that also makes Magtech ammunition.

Many S&B products are imported into the United States.  Their.32 S&W Long uses a flat-nosed, 100 gr bullet so the cartridge is similar to the old, American made .32 Colt New Police but it can be fired in any revolver chambered for the .32 S&W Long.  This ammo has been available from many ammo sources on the internet.

The S&B 32 Long performs about the same as ammo from other factories, that is, unsuitable for most handgun applications other than plinking due to light loading.  On a hot day it did manage 696 fps (ES 107, SD 31) from the four-inch barrel of my S&W Model 30-1.

I got a surprise from the TC Contender with its 10-inch MGM barrel.  From this barrel the S&B ammo produced 1009 fps (ES 62, SD 16).  This performance was verified on two other occasions.  The velocity increase of the S&B is not matched by Remington (841 fps) or Magtech (826 fps) ammo, although they good gave good velocities.  I conclude that the Sellier & Bellot 32 Long ammo uses powder that is more progressive and is able to take advantage of the longer barrel length.  I have to admire a barrel that puts 32 Long performance in a league with the 32 H&R Magnum.

Accuracyof the S&B ammo was very good with an eight-shot group measuring 1.12 in.  The best seven were in a bunch that measured 0.80 in. 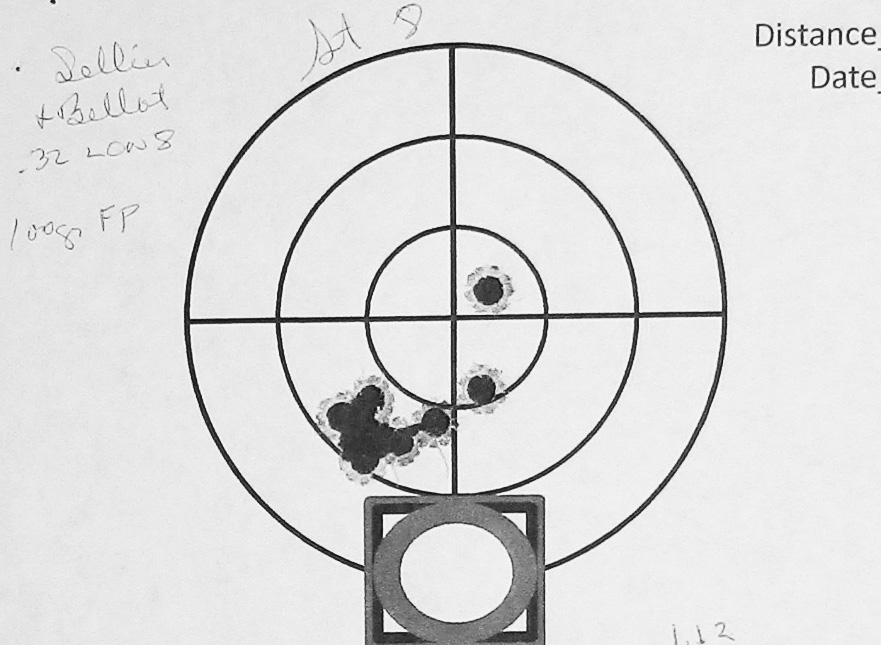 The Thompson Center G2 Contender with 10 in. MGM is a combination of high quality products.  It works extremely well and gives much greater performance than one usually expects from the .32 S&W Long.  That is exactly what I was looking for – the answer to the question “How good is the .32 S&W Long?”  The answer:  In this Contender it is as good as the .32 H&R Magnum used in 4-6 inch barrels. Handloads using medium burning pistol powders like Universal Clays,  A #5, and Unique are outstanding.  It is great that jacketed bullets work really well and can be given velocities that will insure expansion.

This outfit would work really well for small game hunting, taking varmints, and silhouettes.  I have only begun to explore the velocity and accuracy performance of handloads.  That is where I will concentrate my future work with this great, single shot handgun.