My love for an old, plain rifle.

Not since a kid have I had such fun,

Read on because, who knows?

The eve of the Great Depression was not a good time to bring out new products, but that is when Savage introduced the clip-fed, bolt action rifle known as the Super Sporter.  It appeared in 1928 and was produced until about 1940.  It was not reintroduced after WW II.  That explains why total production was only a bit more than 20,000 units.

There is a bit of confusion about the nomenclature of this rifle. There were two models, designated the Model 40 and Model 45.  I believe that all units have the “Super Sporter” marking, but they are not marked “40” or “45.”  Both models had the same action but the Model 45 was spiffier with a checkered stock and an aperture sight.  There may have been other minor differences.  The Model 40 was produced in the greater number.  They were both offered in .250 Savage (250-3000), .30-30 Winchester, .300 Savage, and .30-06 Springfield.

This discussion takes us back to the beginning of the factory production of bolt action rifles for sporting use. The Super Sporter replaced Savage’s earlier bolt actions, the Model 1920 and its successor, the Model 1920/1926. The Model 1920 was an interesting and capable rifle but it had a complicated, Mauser-based action that was difficult to manufacture and the action was not long enough to handle the .30-06 Springfield.  The action of the Model 40/45 solved both of those problems, so the small production of the 1920/1926 passed into history, and collector editions are difficult to find.  Actually,Winchester beat Savage in the bolt game by a few years when they introduced their famous sporting rifle, the Model 54, in 1925.  This Winchester forerunner of the Model 70 faced the same depression-era sales problems as the Savage rifles.

The Super Sporter bolt action .30-30 that I describe here is composed of steel and walnut with a 22-inch barrel, a box magazine, and simple, open sights. It has a grooved steel butt plate.  Simplicity extends to the whole design;  there is not much that is innovative in the action except for one feature to be discussed later, and some of the features are not well designed.  A plain rifle it is, for sure.

Nevertheless, plain rifles are the American Way. They are my meat and I can always find something to love about them.  On this item, the metal is in good condition and the wood has a nice color.  Thank goodness, none of the previous owners tried to mount a scope, so the receiver has not been violated with ugly screw holes.  Some jaunty gent did scratch his initials, looks like “EJO,” under the .30-30 mark on the barrel, but this is not very noticeable.

Pick a thirty, any thirty.  The .300 Savage cartridge had appeared in 1920.  It was a short cartridge with a lot of punch for its size and was quite appropriate for Savage’s famous Model 1899 lever action.  Although the cartridge eclipsed the performance of the .30-30 Winchester, the .30-30 had been so successful in earlier, lever action rifles that Savage must have felt the Super Sporter’s appeal would be enhanced by including this older chambering in the lineup.  Of course they wanted to sell as many units as possible, and since the .300 Savage and .30-06 Springfield were also offered, all the thirty bases were covered!  I know not how many .30-30s were made, but probably not as many as the other thirties.

The simplicity of the action shows in the next pic. Two screws at the ends of the trigger/magazine plate hold the action in the wood.  Note that the front screw fastens in the bottom of a recoil lug that is sandwiched between the barrel and receiver.  The receiver

is tubular, long, and of heavy construction.  The trigger design is simple with the sear serving as the bolt stop, so the bolt may be removed while pulling back on the trigger.  The bottom metal is stamped out of rather heavy steel and has rounded edges.  The effect of all of this is that the construction of the rifle seems very sturdy.  Looks like you could not hurt it short of running over it with a gravel truck. 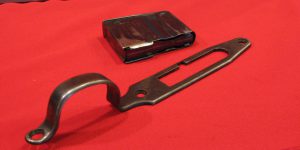 The safety deserves special mention perhaps because it is not one of the better features of the design. It is a tab on the right side just behind the bolt handle.  The tab is part of a circular band that passes under the action and rides in a channel in the wood.  Pull the tab up and the trigger is blocked and the bolt is locked down.  Push it down and it is ready to fire.  A spring loaded plunger in a hole in the wood acts as a detent for the “safe” and “fire” positions.  The affair works but I do not like the idea of stock wood being part of the mechanism.

In addition to these basics, there are some very neat features in 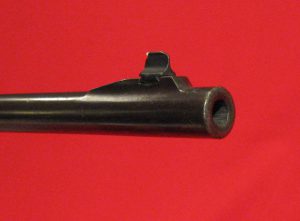 the Super Sporter.  The Savage logo, an “SVG” in a circle, is on the butt plate.  The height of the front sight can be changed because it is dovetailed in a ramp forged at the end of the barrel. The box magazine, which holds three cartridges, is heavily constructed of stamped steel.  The release lever is located on the right side of the magazine, rather than in front or in back of it, and it works quite well. 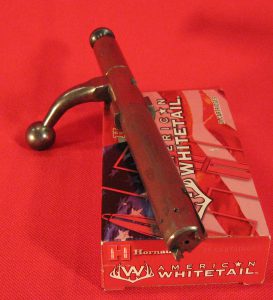 Here is what I love about this action.  That tubular steel receiver is just about the largest, heaviest steel tube to be found on any rifle, and it has minimal cutouts for the magazine and ejection port.  Looking at the next picture you can see that the receiver is solid and thick from the rib down to the mag cutout and from stem to stern.  Every one praises the stiffness, and resultant accuracy benefits, of the tubular steel receiver in Remington 700 actions.  This Savage has that in spades.  Whoa, Nelly!  With a good barrel this puppy could be highly accurate.  We will find out later. 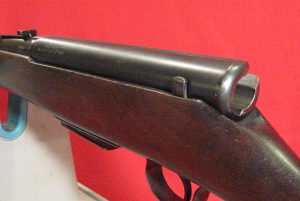 The big tube. Tab is the safety fire indicator 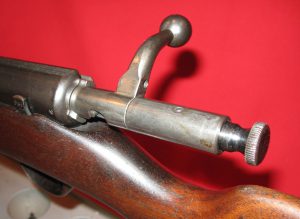 Next, note the picture showing the bolt open and a cartridge in the magazine. With no front locking lugs, and therefore no lug mortises to negotiate, the round has nowhere to go but smack into the breech.  Cartridge feeding is extremely good and bolt operation is about as slick as the fabled Krag-Jorgensen. 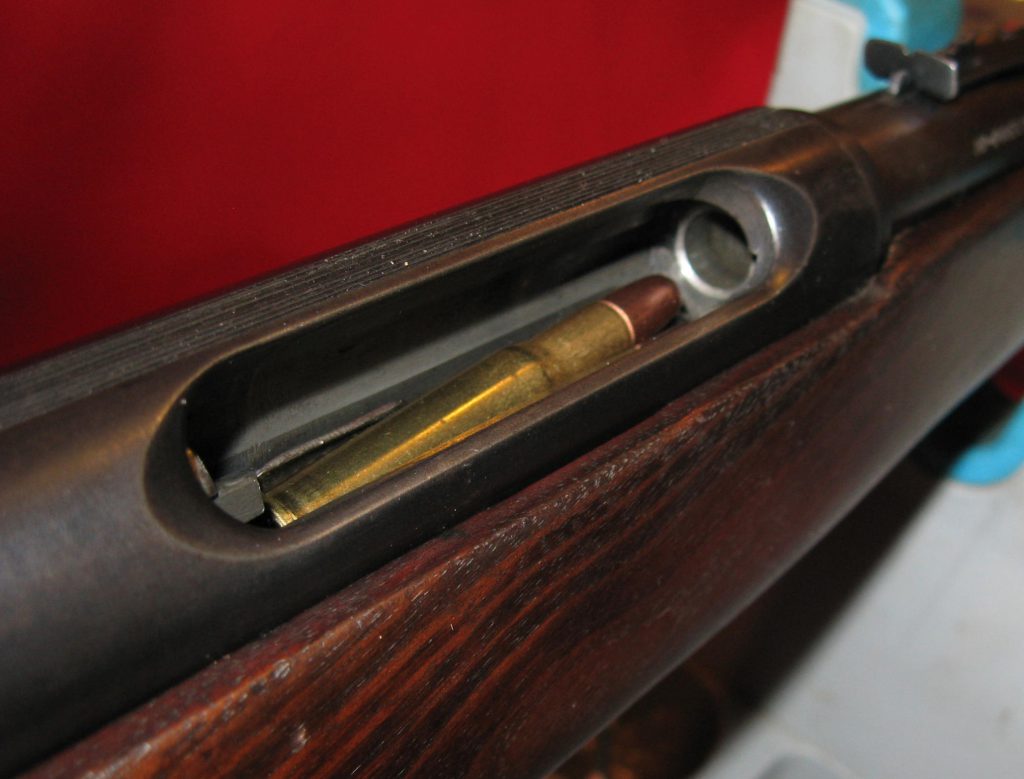 Cartridge ready to go in

Yes, we will shoot it.

The picture of the stock channel with the action removed gives an indication of the action bedding. Note the shiny appearance of the tang area around the rear action screw.  Very smooth and long association of wood and metal here.  There appears to be similar but less complete contact of the receiver just behind the recoil lug.  Thus, support of the cylindrical action seems good, but this does not extend to the barrel because it contacts the barrel channel in several places.  Nothing will be done with this, however, until after I have done some shooting with the fusil.

The sights consist of a simple rear notch on an elevator and a bead dovetailed into a ramp forged at the end of the barrel. Not a promising situation for presbyopic me.  I filed the notch a bit wider and deeper.  This usually helps old eyes get a better sight picture.  I also used an open ring target of diameter such that the bead could be centered, effectively giving an aperture in the target plane.  The receiver is tapped for a peep sight and it is the Lyman 40S that works, hard to find and expensive when you do.  Something else might be made to fit without drilling more holes and I might look into that at a later date.

As you can see in the action picture, the trigger is very simple. It has a very short takeup and a bit of creep but is fairly light.  I will not complain about the trigger because the human finger-brain connection can become accustomed to a lot of trigger woes.  With the Savage SS 30-30 the sequence takeup-creep-bang!  was consistent so I was able to get some decent shooting accomplished.

Over my solid bench rest I fired a dozen three-shot groups at 50 yards using several factory loads. It was a bit tough getting a repeatable sight picture but the gun functioned very well.  Group size ran from 0.79” to 1.45” but were clustered around 1.00”.  Five groups using Hornady American Whitetail 150-grain loads averaged 1.06 inches.  The smallest of these measured 0.80”.  An additional five groups using Remington CorLokt, Federal Fusion and Hornady Leverevolution loads resulted in an overall average of 1.08”.

The four groups shown in the picture are typical of the rifle’s accuracy performance. They show a strong tendency to give a 2 + 1 result, with the 2 often touching each other, and the 1 only an inch or so away.  This is common with old, plain sporters and I love to see it because it is pointing the way.  Note that the flyer is always below the close pair.  This

often has to do with barrel bedding and floating the barrel is the prescription.  That will be the first thing I try.  More serious bedding work could also be done but cost-benefit has to be considered.  How much time should one spend on a near 100-year old rifle when other interesting projects await?  For me, enough time to show that the Super Sporter was an admirable arm with very good performance.

Bench shooting stout loads in .308 and .30-06 (and certainly .300 Win Mag) can make you tense. It takes fewer rounds than you think to affect your concentration on hold, sight picture, and trigger control.  Not so much with the .30-30, even using a 7-lb. rifle with a steel butt plate.  It is very pleasant, and that is valuable when looking for accuracy.