Would you like to be able to buy a brand new Ford Model A? I sure would. I would like a black coupe with a rumble seat. It would be great if it had some modern design in the engine and drive train. That could be done in a vehicle that still looked exactly like the original model.

If the auto business were like the gun business, I suppose that might be possible. The number of ancient guns now offered in replica form, using modern materials and manufacturing techniques, is staggering, and modern versions of classical rifles are common.

A case in point for the latter category is the lever action .30-30 rifle now being made by Henry Repeating Arms of Bayonne, New Jersey. They call it the Model H009 and it updates the various lever actions made by Winchester and Marlin throughout the 20th Century using today’s materials and manufacturing techniques. Being chambered for the .30-30 Winchester, this Henry follows from the Winchester 1894, but its design owes more to the later Marlin Model 336, which it strongly resembles. See the picture at the end of this post.

Note there is no connection of this model or of the company with the famous Henry lever action of Civil War days, the forerunner of the Winchester 1866. Rather, the modern Henry Company, led by owner/president Anthony Imperato, began production of lever action rifles around 1996. Starting with .22 rimfire rifles, they have expanded to now offer many models in many calibers, light to heavy. They have also produced these classic guns in decorated and commemorative editions (see their website), and, they are in fact now producing a replica of the original 1860 Henry. Thus, the Henry story is a real success story, supported by sturdy and well-finished rifles. Their motto, “Made in America, or Not Made at All,” shows the pride they take in making a quality product in this country.

This rifle, except for one interesting component that I will discuss later, is all steel and wood, well-finished and well-assembled. This in itself projects an image of vintage quality. The action most closely resembles that of the Marlin 336 in that it has a tube magazine, an external hammer, and a round bolt with a side ejection port. Dropping the lever moves the bolt back, ejecting a spent cartridge and cocking the hammer. Closing the lever raises the carrier and closes the bolt to chamber the next cartridge, as in all lever actions. 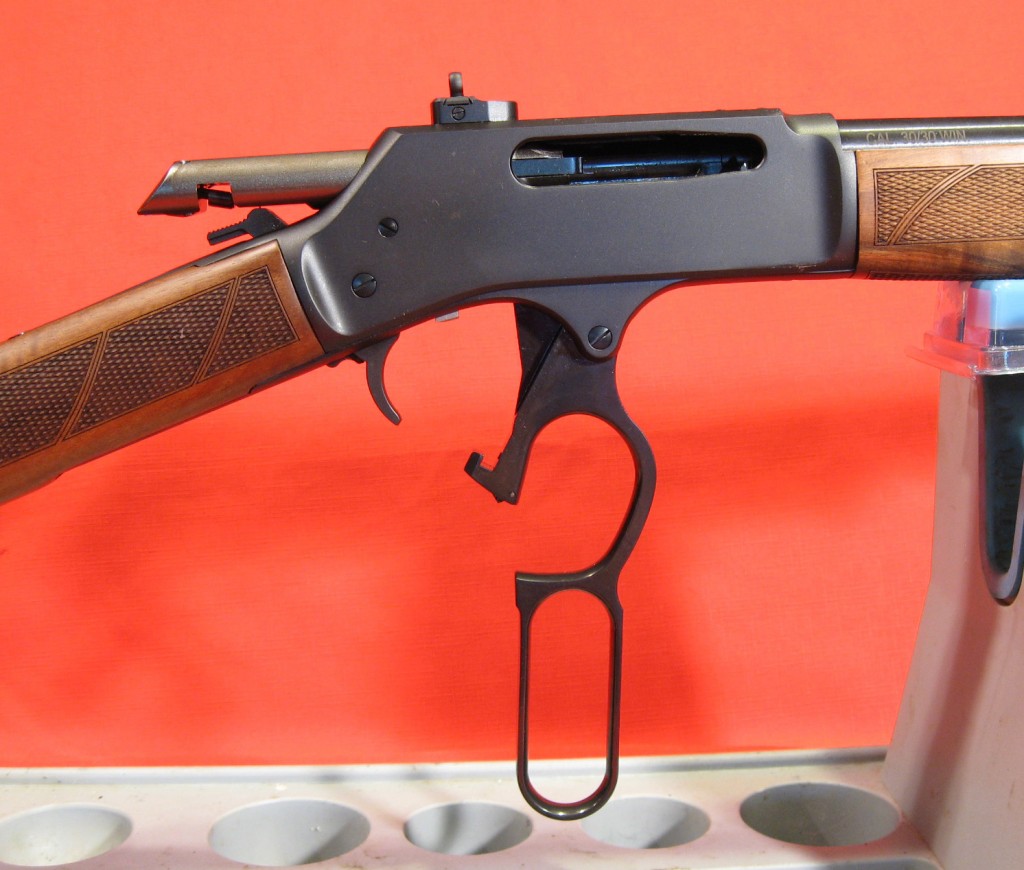 The Henry with action open

With its 20-inch barrel, the gun is carbine length. The receiver has a dark blue, satin finish but the lever, barrel, forearm cap and magazine tube have a bit higher polish. The stock has a straight grip with stock and forearm of American Black Walnut of excellent 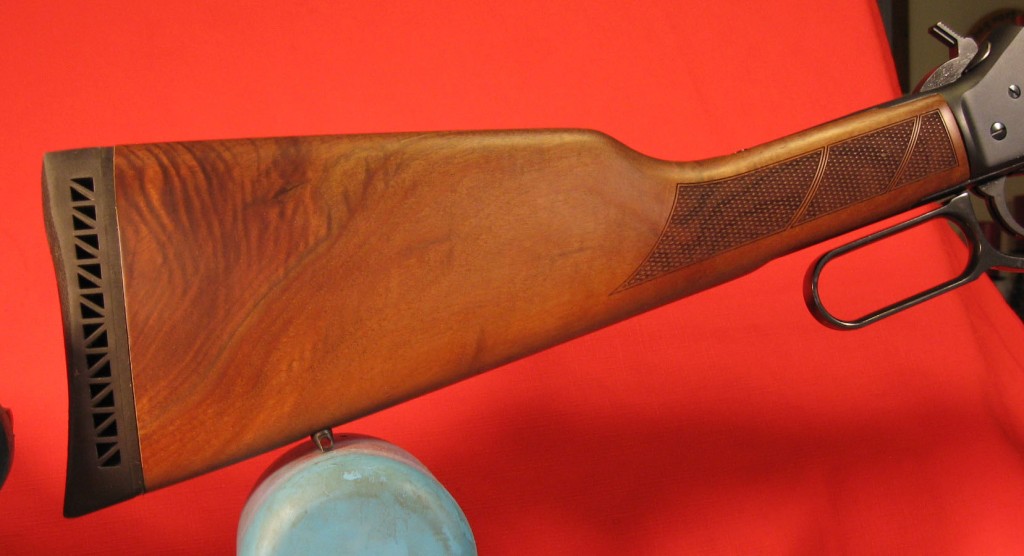 Butt Stock of the Henry. Walnut with good figure.

quality for an over-the-counter gun. The picture of the butt shows the figure in the wood and the substantial recoil pad. The grip and forearm have attractive machine checkering. The end of the forearm is held to the barrel by a steel cap. 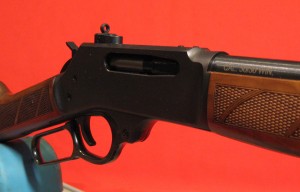 The sights supplied with the rifle include an XS Ghost Ring at the rear and a square blade at the front. Ghost ring means that it is a peep with a whompin’ big hole that makes it easy to pick up game at range. It is adjustable for windage and elevation. If that is not your style, the receiver is drilled and tapped for scope bases and bases that are made for a Marlin 336 will fit. One piece and two piece bases are available from Weaver, Leupold, and others. This makes scope mounting easy, all due to the side ejection of empties. Pick a scope you like but be aware that the drop in the butt is too great to give you a tight cheek when aiming the scope. A cheek rest could be added.

The rifle has a couple of features that are atypical when compared to a gram’pa lever action. The first is the loading port. It is a cartridge-sized opening in the magazine tube. To load, turn the follower and lift it up to expose the port, then drop in five cartridges, just as you would do with that old tube-magazine .22 that you loved when you were a kid. Yup, take a look at the pictures again and you will see there is no loading gate on the side of the receiver. Some lovers of the old levers may not be able to take this. To admit a 30-30, the tube port must of course be much larger than that of the 22s you are used to seeing, and when open it looks like you could put an ice cream cone in it. Be that as it may, it works well and I like it. I don’t enjoy inserting cartridges in the gate of a Win 94 – it always seems harder for me than it is supposed to be. It is true that reloading the Henry will be marginally slower than reloading a 94 or 336, but with five in the mag and one in the chamber you will have six shots with which to bring down your quarry. Should be enough. 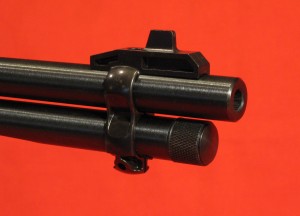 Second, we note that early models of the Henry .30-30 had a conventional, dovetailedfront sight, but this edition has a front band which holds barrel and tube together and has the front blade sight built in, all in one piece of plastic (oops, polymer!). There is a screw through the base of the blade that keeps the piece in position and a screw through the bottom flanges that serves to clamp barrel and tube securely. In my opinion, this is not a great feature of the gun. It works well enough, but it looks odd and limits front sight choice to the supplied blade that is of a piece with the base held by the band.

I tried out the Henry .30-30 using 10 different factory loads, firing each of them over a chronograph and placing them at target range in three- to five-shot groups. Velocities were as expected for a 20-inch carbine and were very uniform with standard deviations in the range of 6 – 20 fps. The 150-grain loads ran about 2300 fps while the 170-grain loads ran about 2100 fps.

I was very interested in seeing how I would do with the ghost ring sight. The answer is, “Good.” Even though the aperture is wide at 0.19” the amazing human eye (even my old one) is still good at centering the front sight in it. Shooting three-shot groups at fifty yards, I had seven groups that averaged 1.10.” Around 2 MOA, and that has always been considered good for a carbine with open sights. The 150-gr. loads did not do quite as well. Groups fell in the range of 1.1 to 1.9.” The adjustments of the ghost ring allow for accurate zeroing. Following that, you would definitely be ready to hit the woods for shots at 100 yards, maybe out to 150 yards.

How About A Scope?

For scope shooting I mounted a Simmons 44 Mag 4-12X scope using a Leupold one-piece base. Unlike earlier 44 Mags, this one is made in China. It worked OK and gave me tighter groups, as expected. From a total of 26 groups, the best twenty, three-shot groups using the various 150- and 170-grain factory loads showed an average center-to-center measurement of 0.94” (1.88 MOA).

Accuracy potential is definitely shown by the fact that the best ten of the twenty groups gave an average measurement of 0.60” (1.2 MOA).

The most outstanding groups were: 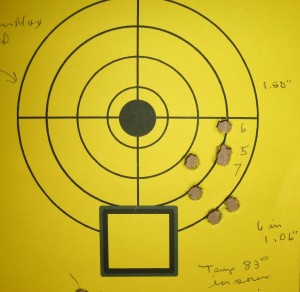 Barrel heating during repeat firing is not a problem with the Henry .30-30. To show that, I fired 7 consecutive shots into one group at an interval of one minute between each shot. The range was in bright sun at a temperature of about 85 deg. Check out the picture. The first five fell in a group of about an inch. The sixth looked like it was beginning to walk up, but the seventh fell back in the family. Barrel heating is not so much a concern for hunters, but I like this performance because it means I can fire four- or five-shot groups for accuracy without worrying about barrel heat.

One often encounters some inconsistency while shooting for accuracy. In this case, it amounted to an occasional three-inch group that would pop up during an otherwise lovely string of shooting. Just often enough to cause a bit of anxiety. However, this usually occurred just after a change in ammo or an adjustment of the scope. Often it would require several shots after an ammo change for the gun to settle down to a consistent point of impact. This is not uncommon, and the hunter will avoid it by choosing a favorite load and carefully sighting in the gun for that load before taking to the woods.

Another Way to Go 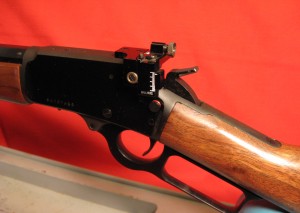 for sights would be to use a rear aperture smaller than a ghost ring. Williams makes models for Marlins that attach with screws at the rear scope base position. This works with the Henry, also. The picture shows a Williams 5D mounted on a Marlin 1894 Cowboy model. Several aperture sizes are available for the Williams to give you a choice appropriate for your work, target shooting to game hunting.

The Henry Model H009 is well-made with a nice finish and great wood. You would enjoy showing it to your friends.

The action worked well and became smoother during the ammo testing. The trigger became considerably better and had no detectable creep at the end of the test sequence.

The rifle gave nominal velocities with the factory loads that have been effective for bringing down deer at 30-30 ranges.

The ghost ring sight indicated it should serve quite well for ranges to 100 yards and a bit more.

The rifle was capable of excellent accuracy, in fact, it is probably the most accurate lever action rifle ever mass produced.  There was little difference in the accuracy shown by the three bullet weights in factory ammo.

Whatever your choice of bullet weight, you will have a good chance to find a factory load that will give you groups of about 1.5” at 100 yards. This will require some expense and range time. (Tip: I would try the Federal Power-Shok 170 first)

Unless you need seven shots to bring your deer down, loading the gun through the magazine port will not cause you any problems.

Do you need a Henry Lever action .30-30? Only you can answer that. Deer season is getting close. 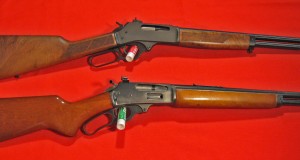