A Umarex Colt .45 SAA in a Western Combo

A rifle and revolver taking the same cartridge was entirely a practical matter for our American ancestors. Survival on the frontier was complicated enough without having to worry about keeping track of different cartridges for long gun and short gun. Why take a chance on getting ammo mixed up in a critical situation? Thus, it is that the rifle/pistol combo in one caliber was popular way back then. 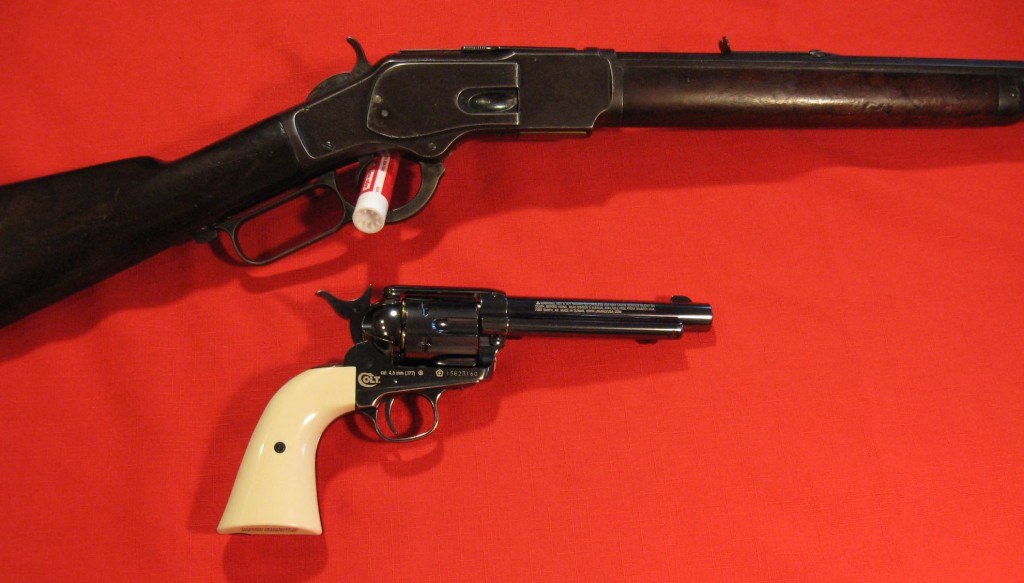 Check out the pic for a popular duo, the Winchester Model 1873 paired with the Colt Single Action Army, which also appeared in 1873. The Winchester could be had in the calibers .44 WCF, .38 WCF, and .32 WCF, also known as the .44-40, .38- 40, and .32-20. Colt also chambered the SAA in the same calibers, so you could have your choice in the late 1800s. The .44-40, being the most powerful, was probably the most popular in combo form and it is what I would have chosen. Truth be told, the longer barrel of the rifle did not add a huge velocity increase over the revolver, but it did offer some, and that, coupled with the greater ease of accurate shooting with the rifle, made the combo an idea that worked. All three calibers could be effective for self defense, and the two larger ones could take deer and even larger game in the hands of someone who knew how to get close to game.

Take a closer look at the photo and you will see that, while the 1873 Winchester is authentic, the Colt looks a little too spiffy to be in the pair. On the left side of the barrel is inscribed “Colt Single Action Army .45.” Read the fine print on the right side of the frame, however, and you will see that it is not caliber .45, but 4.5 mm (.177). Yup, it is a BB gun, a modern replica of the Colt SAA and that is what this post is about.

Well, Winchester never offered the Model 1873 in .45 Colt so that caliber could not be part of historical combo, anyway, but this replica is worth some consideration. It is made by Umarex USA of Fort Smith, Arkansas and is part of their extensive line of quality air rifles and pistols. They are able to use the Colt logo on the gun, which adds to its appeal.

It is a handsome gun with a bright blue finish on the steel frame and ivory-like plastic grips. The model is also available with a nickel finish. The barrel length of 5.5” is the same as the “Artillery Model” of the original SAA family. Other dimensions appear to be close to those of the originals, so the gun points well and has considerable heft. Operating in single action only, the piece is an excellent replica of an original Colt. One point of departure, however, as shown in the bottom view picture, the gun has a safety located in front of the trigger guard. When the Safety is on the gun cannot be cocked.

Bottom View of SAA. Not Red Dot on Safety in Front of Trigger Guard

Power for the weapon is provided by a 12-gram carbon dioxide cylinder which fits in the grip frame (see picture). The left grip has a built-in hexagonal wrench to use for tightly seating the cylinder. The grip frame is just a bit longer on this replica in order that it can contain the gas cylinder. I really like the feel of the grip. 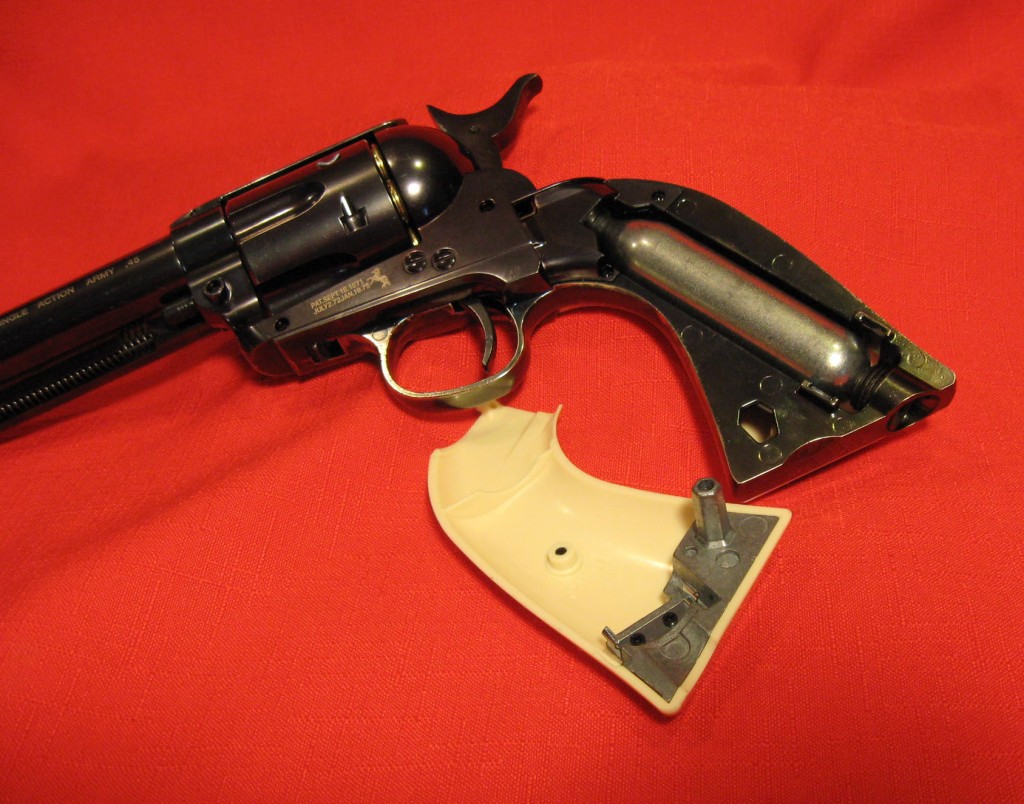 An appealing feature of the Eumarex is that the BBs are held in brass “cartridges” which are loaded through a loading gate on the right side, exactly as they would be in an original Colt. Each cartridge is approximately the size of a .357 Magnum cartridge. For loading, take the six cartridges, push a BB into the red plastic fitting of each, and load them in the 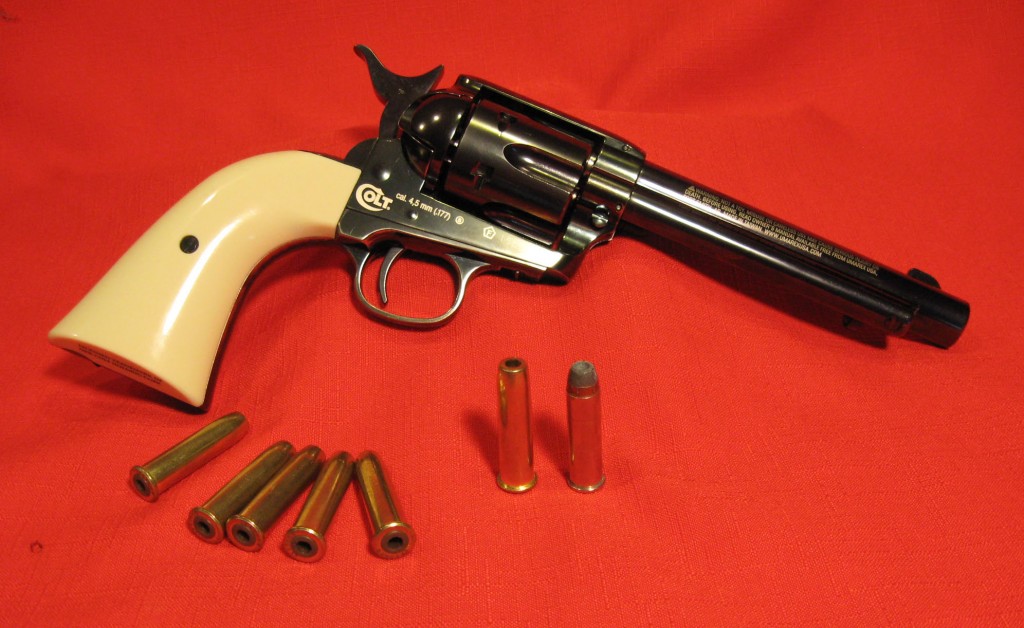 BB Cartridges with .357 Magnum for Comparison 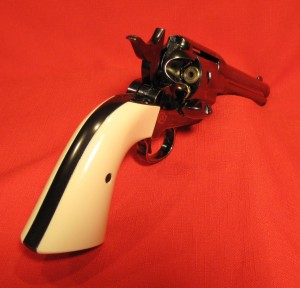 six chambers. With the hammer in the half-cock position, the cylinder may be manually turned to accomplish this. Close the loading gate and bring the hammer to full cock. This aligns a brass cartridge with the barrel for firing. Fire six times and then you may use the functional extractor rod to remove the empty brass, but this is unnecessary because the cartridges will just fall out. Nevertheless the function is there, just as on the original Colt SAAs. In fact, the appearance and function of this piece are about as close to an original as one could ever get in a BB gun.

For a BB gun, this SAA clone is both powerful and accurate. Originally I thought “This is a toy for Grampas” because of its historical connections. The size of the grip, the weight, and the tedious loading procedure made me suspect that kids would not go for it. Putting the gun in the hands of four grandsons, ages 10 to 15, proved me entirely wrong. They got the concept, had no trouble loading and firing the gun accurately, and asked to shoot it again when the next morning came. The ten-year-old became quite proficient and could regularly puncture pop cans at twenty feet or so. I guess we will have to say that it appeals to all ages.

We must emphasize that use of this gun must be supervised by knowledgeable adults because it is capable of inflicting serious injury.

Velocity – Ten shots over my chronograph gave a high velocity of 429 fps, a low of 403 fps, and an average of 415 fps. The standard deviation was a low 8 fps. The average velocity puts this gun about 40 fps faster than the latest Daisy Red Ryder Carbines. Lining up Pepsi cans, I found penetration of three of the cans and one side of the fourth. Fired at pine, BBs would usual bury themselves to their full depth. This is certainly powerful enough to penetrate flesh and would be seriously destructive to eyes and ears.

Accuracy was very good and repeatable through the first 35 shots, or so, of a CO2 cartridge. Of most importance is that the gun created confidence among youngsters shooting at pop cans and even smaller targets, like Ritz crackers.

Groups that I shot were good with no flyers that I could attribute to the gun. Generally, a five-shot group measured an inch or less when fired at 20 feet or so. The picture shows two groups that I shot offhand at a distance of 18 feet using a two hand hold. Careful shooting from a good rest would result in smaller groups.

Here I should say that, for a gun in this category, the trigger is quite good. It is fairly light, and it breaks cleanly. Trigger function and accuracy are such that the gun will reward you with an errant hit if you jerk the trigger or heel the grip, just as you would get with a real powder-powered gun. Therefore, it should be useful in training and practice for folks who want to shoot real Colts or Colt clones.

I thought it would be fun to try some point shooting, something that I have previously done very little of. It could be practical, also, because in a tight situation you will not be 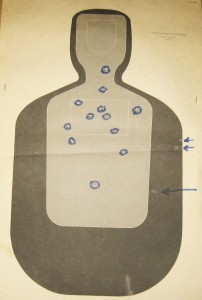 aiming your Colt. You will be pointing it. I used an NRA human silhouette target at fifteen feet. With gun at my side, I would then raise it with extended arm, get the muzzle on the target, and fire quickly. The results are shown in the picture. For fifteen shots, 12 landed in the inner, gray outline, and three in the outer black. I need some work, but, hey!, I got the equipment for it.

This is a fine product, great as a replica and as a firing BB gun. Granted that it is not low-priced, but I think the quality of materials and construction is a cut above the average of guns in this category. I think the model will be around a good while.

If your kid wants a real BB combo, though, his best bet is to pair the Colt SAA with a Daisy Red Ryder Carbine.