The Remington Model 700: Not Really a Custom Rifle

There I was, standing before the used gun rack in one of my favorite shops, my attention riveted by a lovely rifle resting there.  It was a Remington Model 700 BDL.  The serial number indicated manufacture in 1980, but it had been in a good atmosphere for its 34 years.  There wasn’t a mark on it, perfect finish all around, and seeming to be in unfired condition. For all of us folks who can’t afford a custom rifle, Remington brought us the Model 700 in the mid-twentieth century.  Admirers of other brands will surely think I am too exuberant, and that’s OK.  There is a lot of excellence out in rifle land, at least there was in the mid-twentieth century, so I will cheer for your favorite brand, too.  Nevertheless, the Remington Model 700 was certainly one of the finest factory rifles to appear in that period. The BDL version in front of me that day was the dressiest of the 700s for most of the model’s life.  The caliber, .30-06 Springfield, a vintage thirty, sealed the deal for me.  Being a resident of Missouri meant that I could walk out of the shop with the rifle in about half an hour, leaving behind less than 10% of what a real custom rifle would cost.

A Little Snippet of History

The Model 700 is a Baby Boomer, so to speak.  The action was born in 1948 when the Model 721/722 duo was first offered.  This long action/short action pair was designed with an eye toward economical manufacture and correspondingly attractive retail prices.  The strength and accurate performance of this plain rifle made it very successful, and the introduction of the great .222 Remington cartridge for the Model 722 gave it another big boost.  By 1962 America was far enough into the prosperous post-war period that folks who wanted a spiffier rifle could afford to buy one, so Remington put the 721/722 actions in fancy duds and gave the world the Model 700.  The 721/722 actions and the successor M0del 700 were developed by a Remington design team headed by Merle “Mike” Walker, who became a legend, both as a Remington engineer and as a champion benchrest shooter using the .222 Remington round that he developed for the Model 722.  Mr. Walker passed away in 2013 at the age of 101.

With the Model 700, Remington also gave us the sensational 7 mm Remington Magnum cartridge, one of the most successful hunting cartridges ever produced. In the 50+ years that have since transpired, the ownership of Remington Arms has changed hands several times.  The company has had other successes and some notable failures, but the Model 700 has remained in production thoughout.  The 700 ADL and 700 BDL have been the common iterations, but special editions have been created to meet every demand, whether real or generated by fickle fads.  Check the Remington section of a recent Gun Digest and you may find around 25 different versions with stocks of wood, laminates, or plastic;  metal of blue or stainless;  barrels heavy, medium, or light;   tactical features or not, etc., etc., etc.  More than I need, but Remington is covering all bases.  To date it appears that more than 5 million Model 700s have been made.

at the BDL I found shows the model’s usual dress:  good wood, with competent checkering, and a buttplate, grip cap, and forend tip of black, engineering plastic, all separated by white spacers.  The checkering is a well-executed, skip-line type that looks better than the impressed, fleur-de-lis checkering that appeared on the first Model 700s.  This, along with the white spacers that are thinner than those found on the early 700s, contributes to a more classic, tasteful appearance of the wood, maybe, hmmmm?, more like a real custom rifle.  The metal finish is also very good, a medium polish in dark Remington blue.  The bolt has a checkered bolt knob and damascened bolt body, decorative touches found only on fine rifles.  The wood and metal have a very good fit.

The picture will show that the butt stock wood has quite a bit of figure.  In the good ol’ days a custom rifle was mainly a wood project, and I remember looking at the custom rifle pages of the Gun Digest where the work of Len Brownell, Tom Shelhamer, Leonard Mews, and others was displayed.  The wood would be gorgeous, mostly walnut with spectacular figure and color and a wonderful oil finish.  The 700 is not up to that, but the stock finish, not quite as glossy as some Remingtons, is smooth and hard and does not have even one little scratch in it. 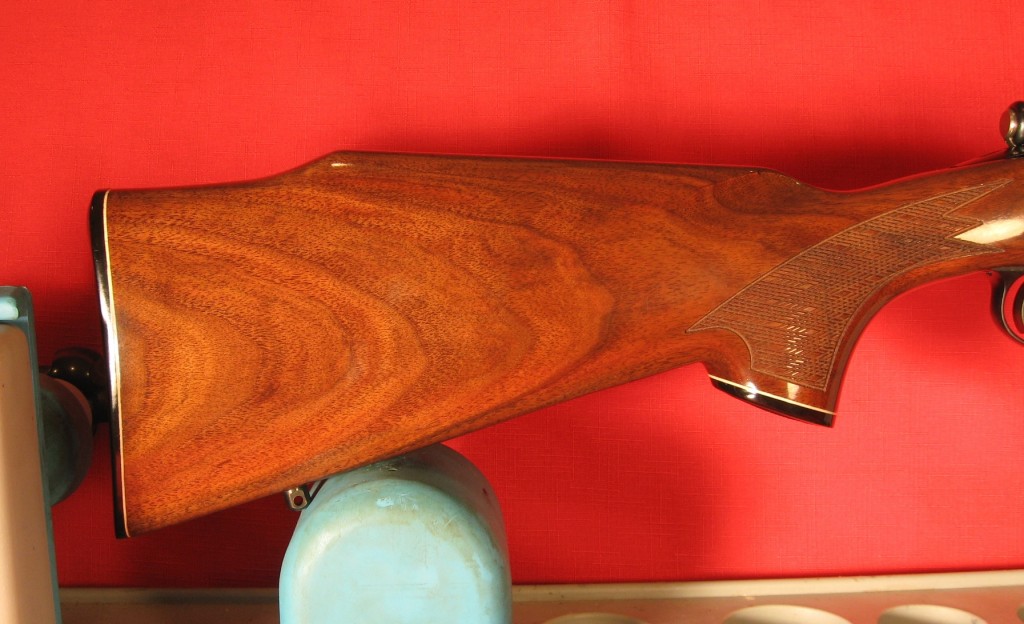 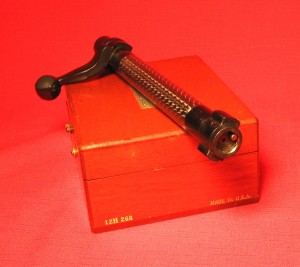 The bolt is one of the characteristic design coups of the 700.  Two locking lugs, like most sporting rifle actions following Mauser practice, but an extractor that is held in a circular groove on the inside rim of the recessed bolt face.  This circular, spring steel case gripper is a work of genius, but not appreciated by all rifle nuts because it violates the Mauser,-Springfield- Winchester Model 70 practice of having a huge claw extractor which grips the case for controlled-round feeding.  All I can say is that the push-feed, circle-clip extraction of the 700 works, and it allows the rim of the recessed bolt face to be uncut through 360 degrees.  This rim then fits in a recess in the end of the barrel, which is in turn surrounded by the receiver ring.  This gives the “three rings of steel,” a cliché by this date, that account for the great strength of the 700 action.

Give some attention now to the dissembled metal parts shown in the next picture.  Note the recoil lug between barrel and action, the tubular steel receiver, and the machined bottom metal with hinged floorplate.  Over the years, a receiver of heavy, tubular steel has proven to be a rigid platform for an accurate rifle, and this feature contributes to the 700’s 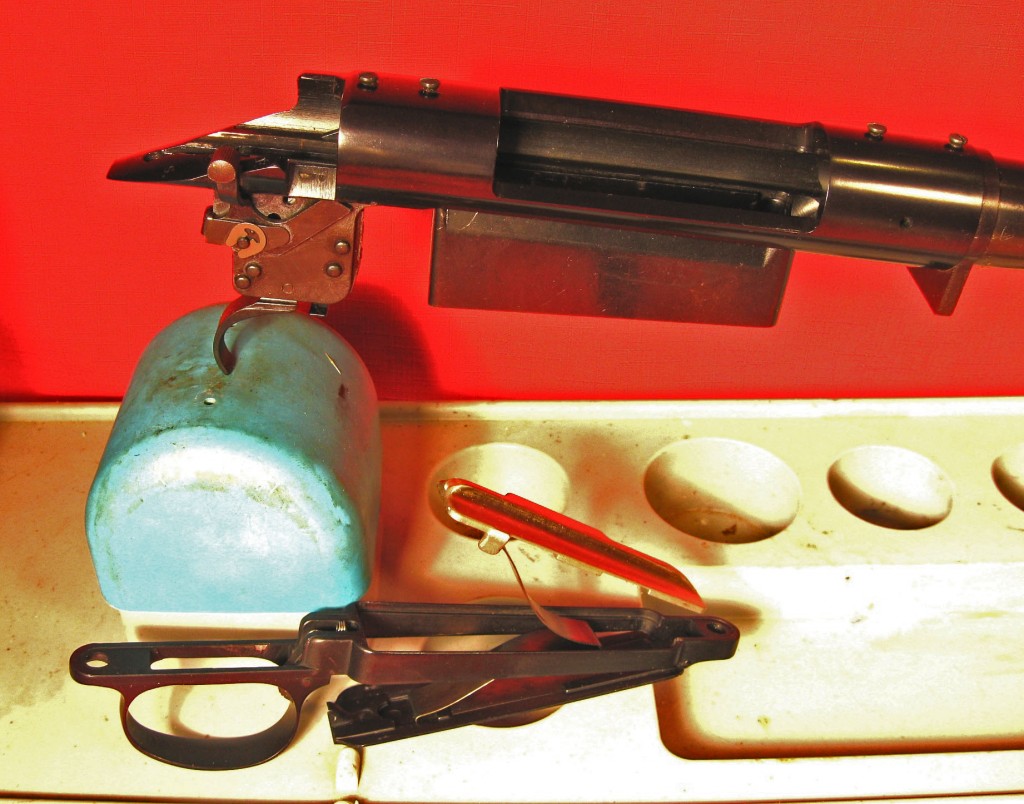 reputation for accuracy. The trigger mechanism lives in its own box, with a front-to-rear safety lever.  The trigger has three adjustments, sear engagement, spring tension, and overtravel.  These could be used to get a very fine trigger pull, but I believe that doing so voided the Model 700’s warranty.  When the 700 appeared, some pundits opined that the 700’s trigger was “target grade.”  Yes, the trigger on my BDL is very good, breaking at about 3.5 pounds, very crisply with no overtravel.  It is a bit heavier than I like for bench testing, but I am not going to attempt adjustment for a while.

At the Range with the Remington Model 700

Taking a new-to-me rifle to the range is always a very special experience, fraught with 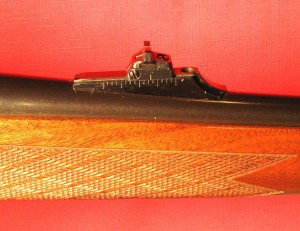 Not many shooters would use the adjustable rear sight

expectation and hope.  It’s like being a kid again.  Would it possibly shoot like a custom rifle?  Maybe too much to expect.  What if it were a real dog?  But that has never really happened to me.  Best for me is that the rifle would show some promise and could be expected to respond to some accuracy tuning.  Time would tell. The bedding of the barrel was typically Remington.  There was contact with the stock for about 2 inches in front of the action, and then some pressure on the barrel beginning about 2 inches from the end of the stock.  The rifle carried the inexpensive scope it came with, a Bushnell Scopechief 3-9X variable mounted on a see-through mount.  Not what I would choose for lots of bench testing, but good enough for an initial evaluation. 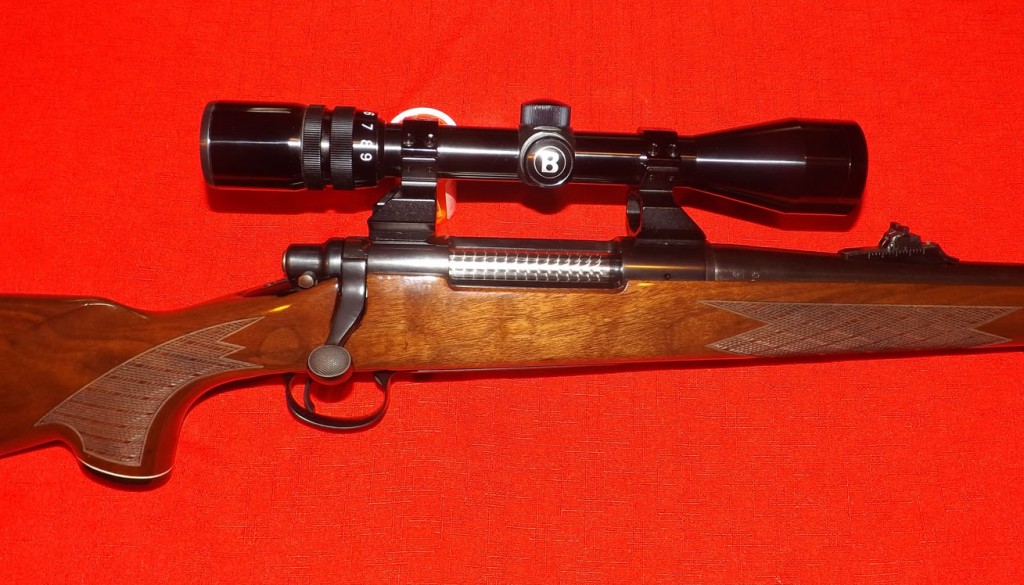 Test firing involved shooting groups (3 shots each) at 50 yards over a solid bench and with a bench-type front rest and bunny ear rear bag.  Generally good results were obtained with three different bullet weights.  A frequent feature of the groups showed two shots very close together with an estranged third shot.  I think this is a characteristic of a new rifle, not shot much, and the barrel and action are not yet completely comfortable in the wood.  This usually improves with more shooting. 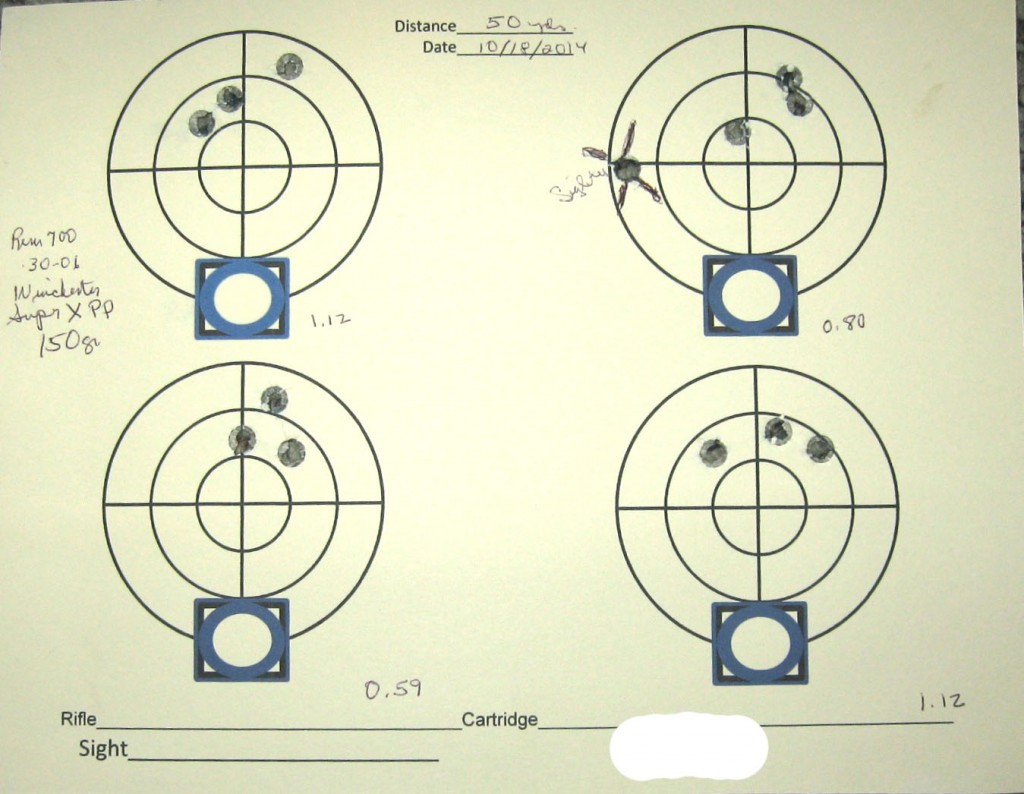 OK, so this is the performance of not-really-a-custom-rifle.  But I am encouraged by the potential it showed.  Each of the three bullet weights produced at least one group of less than 0.60” (1.2 MOA).  I could head for the fields of deer and elk tomorrow, with complete confidence in my rifle. But alas, that is not my game.  My game is to do some accuracy work on Mr. 700, retest him, and report back to you at some future date.  I will bet you that I can improve the accuracy performance.  Maybe to the level of a custom rifle?

If you would like to have a custom rifle built with the Model 700 action, Then Remington’s own “Custom Shop” would be a good place to look.  They offer a variety of rifles for hunting, target shooting, and tactical applications with blueprinted actions, custom barrels, and perfect action bedding.  According to Remington, a lot of hand work goes into the construction of these rifles.

Another modern approach to custom rifles is typified by the McMillan Firearms Co.  McMillan offers a line of rifles with emphasis on the tactical types.  Apparently that is what it takes to make money these days.  The material and workmanship of the McMillan rifles is first rate and worthy of the custom designation.  They also illustrate a trend that is followed by a number of modern companies.  Most of their rifles are offered with polymer composite stocks fitted with full length aluminum bedding blocks.  This totally eliminates the tedious handwork of bedding a choice wooden stock.  This, along with CNC machining of metal parts, makes it easy to assemble custom rifles for off-the-rack purchase.  Don’t bother with special desires, just buy what they have to offer and it will perform really well.

A “traditionalist” may be a person who wants to live in the past and follow the old ways.  Out of date, perhaps, and over the hill.  I am a traditionalist and I am totally content to be one. The word “tactical” is overused in the firearms market, and I won’t use it.  As good as plastic stocks are, and I have had some experience with that, I’ll take the beauty of good wood any day of the week.  I can also live with wood laminate if it is a color I like.  It is very stable and strong and often has pleasing grain and color.  Also, barrels of the better rifles made in the twentieth century are capable of very fine accuracy.  Many vintage rifles will tune up to custom accuracy performance.

The Remington Model 700 BDL is close enough to a custom rifle to suit me.