This post discusses the design of a classic, lever action rifle, the Savage Model 99, in .300 Savage.  A more complete, detailed discussion of the rifle’s history and design is found in the article “The Incomparable Savage Model 99” that appears in the Articles list.

The Savage Model 1899 was produced in a wide variety of models identifiable by serial number and alphabetical designations.  The model variety results from differences in barrel length and configuration, wood design, and whether the rifle uses a rotary magazine or the removable box magazine that was introduced at a later date.   Early on the rifle simply became known as the “Model 99” so you might find one to be a 99A, 99B, or 99C, and etc. through a host of others designated by single and double letters..

The Model 99EG that I will describe is one of the most common of the 99s and is usually found chambered for the .300 Savage.  It has a serial number in the 600 thousands and the “C” in the lever boss code indicates manufacture in 1951, so it is now ready for its 64th birthday in 2015.  Common it may be, but it has all the features of a classic Model 99 and was bought for less money than some older, less common ones would have demanded.  Yes, the Model 99 has collector interest because its production ended some time ago.

This rifle has a 24” barrel of medium taper with a ramp front sight.  The rear buckhorn sight has been replaced with a filler wedge in the dovetail and a nice, old Redfield aperture sight  is mounted on the tang.  The receiver is not drilled and tapped for scope bases.  Savage did not do that until the late 1950s.The rather wide receiver has the rounded bottom of the rotary magazine models and it has the little window on the left side that shows the number of shells remaining in the magazine.  A little cylindrical peg that 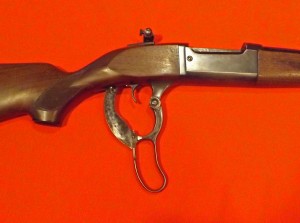 protrudes when the bolt is in battery and ready to fire is located between the bolt and the rear sight.  The square bolt is in the white and it locks at the rear in a notch in the frame when the lever is closed.  The bolt is thus completely supported by the frame of the action. The substantial lever is case hardened and has a small channel for a sliding safety that also locks the lever closed when engaged.  The lever uses a curved blade of very strong appearance, also case hardened, which connects the lever to the innards and allows it to actuate the bolt.

The wood is straight-grain walnut with a bit of curvy figure in the butt.  The front wood, which is rather long, has the schnifty little Schnabel tip that Savage put on so many of its rifles.  The forend and wrist carry rather coarse checkering of no particular distinction.  The pistol grip carries a metal grip cap and the butt has a grooved metal plate.  No name on the plate.  Workmanship and fit of parts is very good. 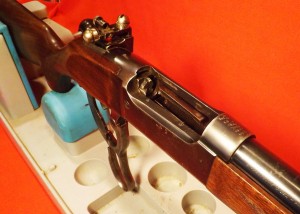 The present state of the finish is about as expected for a rifle from the middle of the 20th century, one that has been cared for.  There is no rust and blue on the barrel is complete.  The receiver has a faded patina.  The wood has the look of 60-year-old walnut with an original oil finish.  It is a look that I like -a vintage appearance –showing that the rifle has been around the block several times, but is still in very good shape.

Savage wanted to offer a cartridge with more poop for hunting than the .303 Savage, the rimmed, original cartridge for the Model 1899.  A thirty is always easier to pump up than any smaller caliber.  The big dog in the thirty camp at the time was the military .30-06 Springfield, which was (and is) a stellar performer on game with appropriate bullets.  This round, however, has a case length of 2.49” and a loaded length of 3.34”, much too long to work in the Model 99’s action.  The answer turned out to be the .300 Savage, a cartridge apparently designed by rifle designer Arthur Savage, himself, with an overall loaded length of 2.60” when using a spitzer bullet.  The target velocity of 2700 fps would have compared well with the .30-06 150-gr load of the time, but the standard load was more comfortable for the rifle when reduced to 2630 fps.  That has been the standard level for umpty years.  A 180-gr bullet has also been a long-term, factory offering with a velocity of 2350 fps.

Reloading dies for the .300 Savage are available from all major reloading companies.  The case will hold up to 45 grains or so of dense rifle powder of medium burning speed.  Loads quoted by various reloading manuals show very good performance.  For example, Hornady’s Handbook of Cartridge Reloading, 8th Edn. Shows that 44.0 grains of IMR 4064 will push a 150-grain bullet at 2800 fps (!!).  An interesting bullet choice in The Hornady manual is their #30396 FTX, a 160-grain boattail meant for the .308 Marlin Express.  This one, and all of their 165-gr bullets can be booted up to 2600 fps with charges in the 42-43 grain range.  With a 180-grain bullet the max is about 2400 fps.

My trips to the range with the 99EG went without a glitch and were very enjoyable.  I followed my usual practice of firing 3- or 4-shot groups at 50 yards, using three factory loads.

The velocity results show that Winchester and Remington factory loads are quite similar, both delivering the advertised, nominal velocity for the cartridge through a 24-inch barrel.  The Hornady Superformance load makes good on its claim of at least 100 fps higher velocity and it shows very good uniformity.  I must also report that extraction was just a bit sticky with this load.  Not difficult, just a bit sticky.  This is a common occurrence with lever action rifles as pressure increases.

Velocity results for several handloads are included in the full article cited above.

I believe the Savage Model 99 has always been considered to be among the most accurate of lever action rifles, and its design would lead you to believe that that could be true.

To me, that means that the rifle would be capable of groups of 2 minutes-of-angle, perhaps better.  In general, that is what I found with the factory loads.

Group shooting was accomplished using the Redfield aperture sight with an aperture of 0.090.”  I will say that, with my mature eyes, I need very good light, bright sun, especially on the target, for best results with this kind of sight.  I did not always have it.  Groups would shrink a bit with the use of a good scope.

The factory loads, Winchester, Remington, and Hornady Superformance, were consistent in returning 50-yard groups of about 1.0” (2 MOA).  The Winchester may have been best because it generally kept four-shot groups in that range or a smidge less.  The point of impact of the faster Hornady’s was about 2 inches above that of the Wins and Rems.  All of these loads would be accurate enough for hunting at appropriate .300 Savage ranges.

The better results that were obtained with handloads are reported in the full article cited above.

Here is a rifle about 64 years old, bought from the used rack. I have no idea of the previous life that it lived, except that it was not abused.  It was found to function perfectly and to show very good performance with factory ammo and even more potential for accuracy using handloads with modern components.

The .300 Savage in the Savage Model 99EG is a combo that is fun to shoot and to reload for.  I like it a whole bunch! 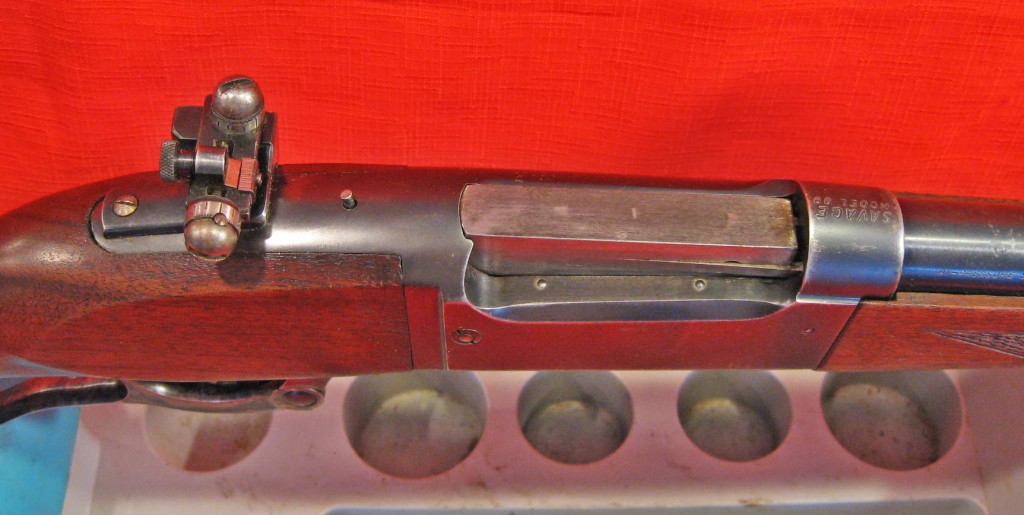 Bolt locked and even with receiver at rear. Note cocking indicator peg in front of sight