Krags with original, military stocks usually shoot well, if the barrel is fairly good. The military wood fits well, the barrel bands securely position the barrel in its channel, and the large, flat bottom surface of the action gives much support in that area.

A modified Krag with a sporter stock could be another story. There are a lot of them around, due to the government’s sale of surplus Krags to the public many years ago.  The .30-40 is a very good game cartridge, so money could be made selling sporter stocks for Krags.  A Krag so fitted, and with no collector value, came my way some years ago.  I recently thought it would be fun to try to epoxy bed the action and get some shooting results with the finished product.

The Springfield Krag-Jorgensen in question is a fairly late model of 1898, the last modification of the Krag design. It came to me with barrel cut to 24 inches and wearing a sporter stock of unknown make.  It had been crudely adorned many, many years ago with patches of gold glitter by a guy named Johnny.  I know because he inscribed his name on the stock.  It wore military sights.  The end of the barrel had been counterbored to a depth of 1.5 inches, probably because the end of the barrel had been damaged by cleaning from the front.  Thus, the piece was a real beater, but the action was good and the barrel scrubbed up to a shiny look with rifling visible throughout the length.  Some pitting was apparent in the grooves, but shooting provided decent groups, about 2 inches with the open sights.

The stock was worthless in present form, and thus it seemed a good candidate for an amateur experimental gun project.

The picture shows my stock with the action removed and positioned above it. Note that there are two action screws, both going through the trigger guard, one in front and one in back.  Then, in front of the action screw there is a huge flat area (the bottom of the magazine) before the front action ring and barrel channel are reached.  The pic shows a band about ¼” wide around the receiver ring.  This band fastens the front of the S & K scope mount and the stock has to be inletted to make room for it.  Going forward, about half way down the barrel you will see a barrel band tapped for a screw that holds it fast in the barrel channel of the stock. 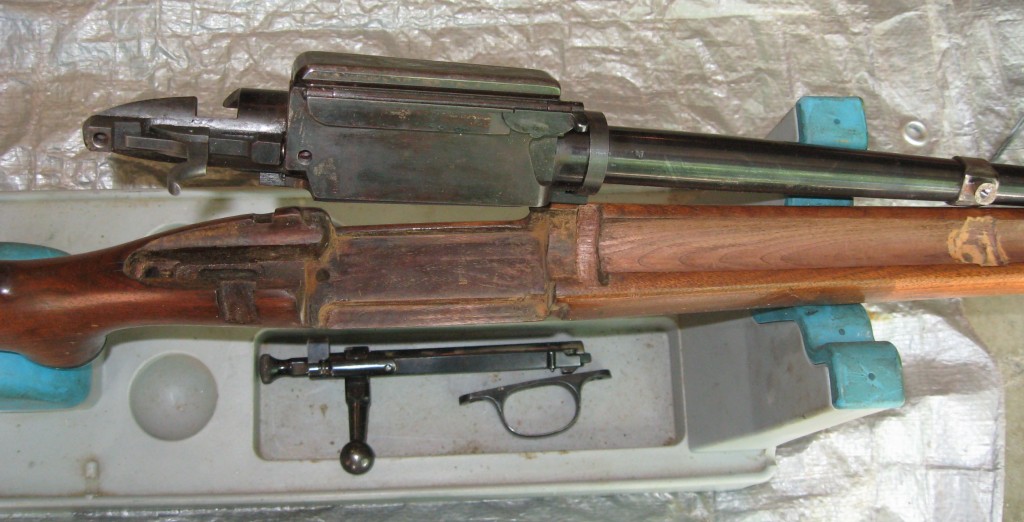 There would be more than one approach to the bedding of this complicated action. The main question is what to do with the large, flat area under the magazine.  My decision was, “nothing.”  Adequate bedding here would require removing a significant layer of wood in order to provide a thickness of bedding material.  Maybe I am lazy, but I did not want to do it.

I decided to take a more conventional approach. I bedded the rear guard screw seat and the tang area, along with the front receiver ring, scope mount band, and a couple inches of the barrel.  By ignoring the three acres of magazine area, the treatment could be similar to that of other sporting bolt actions.

The barrel band raised another question. I think most gun nuts, including me, would probably not want their barrel grabbed in this place or in this fashion, and It would have been easy to remove the band and let the barrel float.  Take another look at the picture, however, and you will see that the action screws, while there are two of them, are pretty close together near the rear of the action.  Additional retention is needed toward the front, so I decided to bed the barrel band and use it.

As shown in the next picture, the middle part of the stock is thin. This results from the size of the Krag action magazine box.  It is the weakest part of the stock.  The pic shows there is a crack that begins just behind the magazine.  This often happens with Krags because they do have substantial recoil that hammers this part of the stock.  I repaired this crack with a steel rod.

My point, however, is that the thinness of the stock in this area requires that work be carefully done. In the present instance, it mainly concerns the process of separating the action from the stock following the setting of the epoxy bed.  Sometimes one must use a lot of muscle to do this.  With a Krag, the stock could be broken at this point if care is not used.

That did not happen to me, I am glad to report. I followed recommended procedures with Brownell’s AcraGlas Gel.  One must be careful not to create a mechanical lock of epoxy to action.  The trigger assembly needs to be removed to avoid a lock, but that is not difficult.  While it was difficult to get action and stock separated after hardening, I was able to do it without damage to the stock.  Patience must always be used.  The finished bedding is shown in the next picture.

One additional thing to note. As mentioned above, when this rifle came to me the muzzle of the old pooper had been counterbored to a depth of about 1.5.”  Amazingly, the gun shot pretty well, but I got tired of the black hole, so I got out my large Dremel cutting wheel and my files and removed about  2 inches.  This took the front sight with it, so I put a Weaver Kaspa Series 4-16X scope in the S & K mount.  This mount, a no-gunsmithing model specifically for Krags offsets the scope, which is necessary for the bolt to work. What went to the range looked like this.

Over the years I have seen several reports of shooting results with Krags. These are usually obtained with a military length arm in its original wood, using the military sights, and that is fine.  The shooter usually finds a couple of groups of about 2”, or a bit less, then says “Yep, and my eyes certainly ain’t what they used ter be, so these Krags shoot real good!”  What I have never seen is a shooting report for a sporter stocked Krag, or a scoped Krag, and certainly not one for a rifle with a bedded sporter stock and a 16X scope.  Well, you are going to get it all right here, friends.

I fired three-shot groups at 50 yards with two factory loads and two handloads. The initial results indicated that the gun was sensitive to the tension of the front barrel band screw. Real tight was not good.  The tension needed to be enough to seat the barrel in the bedding, and then just a little more.  Then, the best results obtained were as follows.

These are the only two factory loads currently available for the .30-40 Krag. They both use spire point bullets so down-range power would hold up well, with good performance on big game to more than 200 yds.

Handloads giving around 2100 fps with 180-gr bullets have always worked well for me with the Krag in the past. In further work, I would bump this to about 2250 to see what happens. 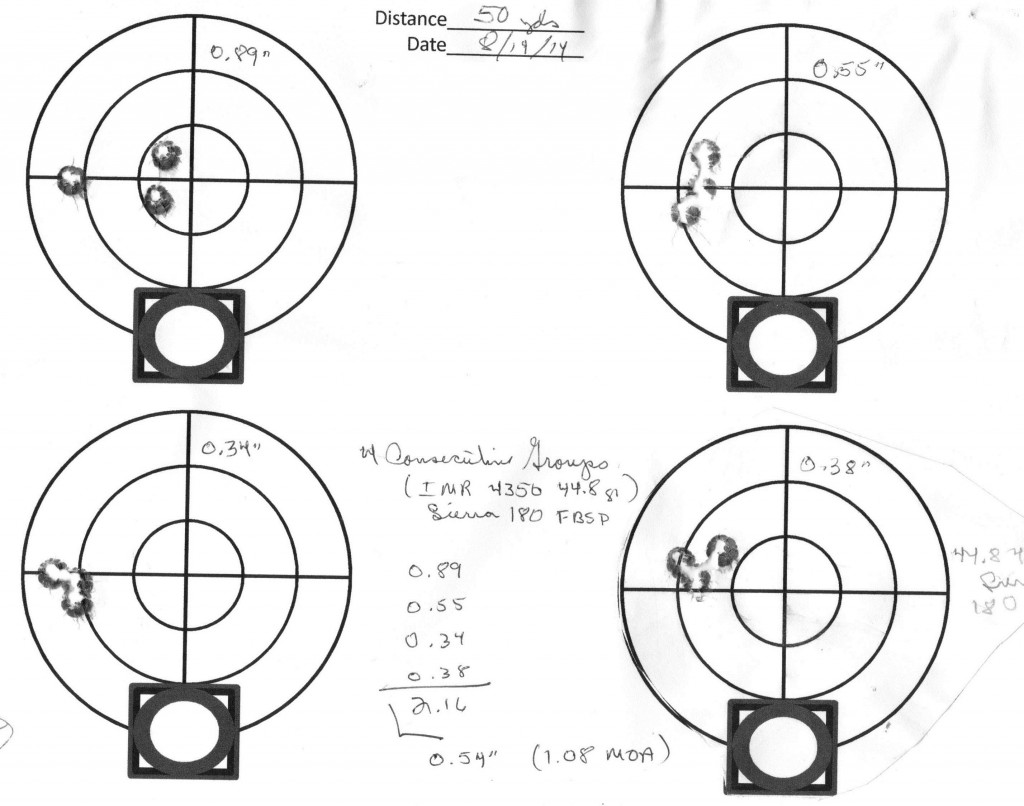 Overall, the bedded Krag seemed to want to shoot about 1.5 MOA with some indication that it wanted to get down around 1.0 MOA. The most amazing results came from the loads using IMR 4350.  I think amazing is the right word, and maybe a little weak considering the age of the piece and the condition of the bore.  I guess no one, including me, would have predicted it, but I swear on a stack of Gun Digests that it happened just as reported.  I am going to follow up with more work with 4350 handloads to further establish this performance.

I also have an idea for a further bit of bedding work on this rifle, but I realize I may be at the point where the accuracy-limiting factor is the condition of the bore and not the bedding. This probably won’t stop me so you may be hearing about it.  Later.

Is it Worth It?

I know that this is a specialist’s project and that it does not have wide appeal in the shooting fraternity. You have to love old iron, especially Krags, to be interested in it.  I know you are out there, so I hope you enjoyed it.