This post describes the design and use of a Weaver Kaspa Series 4-16X Rifle Scope, a scope made in China.

But first, how about a nice, fall bouquet?  The flowers are free.  You can find them along most country roadsides this time of year.  We have some cattails, goldenrod, Queen Anne’s 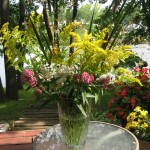 Lace, butterfly weed, and a couple of others.  They last well in a vase.  Goldenrod blooms will continue to open, but, alas, the butterfly weed will not.  The message is: Fall is breathing down our necks.

I must get zeroed in now on the reason for this post.  The big question is “Can I live with a scope MADE IN CHINA?”  There are more and more of them, you know, and they are taking over the lower cost end of the optical spectrum.  In time, if not already, they will dominate that segment of the market.  It seemed that my best chance to check out a Chinese scope was with a company that has a number of successful, long term scope models and a reputation to protect.

The Weaver company began operations in 1930.  One man, Bill Weaver, had a vison and some ability, and he built a great little company.  He made all his own tooling and carried out all manufacturing operations, even to the point of grinding his own lenses.  In 1964 he was making half of all scopes made in America and he built a new factory for 600 employees.  Not much later things began to go downhill.  About the time Japanese autos started to make a real dent in the American market, small companies also felt the pressure of foreign competition. Weaver sold his scope company to Olin Industries in 1968. He passed away in 1975.  The company then got on an ownership merry-go-round, as has happened with many companies in the shooting sports.  The details need not be covered.  Suffice to say, Weaver is currently owned by ATK (Alliant TechSystems).  This, my friends, is a sad story.

In the picture, the scope at the top is Weaver-made, a 2.5-7X variable with a steel tube.  The tube is blued, which I like.  The windage and elevation knobs are finger-adjustable.  Fine crosshairs comprise the reticle.  The lower scope is much later.  It is a Model V10, 2-10X variable scope made for Weaver in Japan.  The tube is aluminum with a black anodized finish.  The windage and elevation adjustments have coin slots, and the reticle is a duplex design.  The scope is light in weight, strong, and has good optical performance. 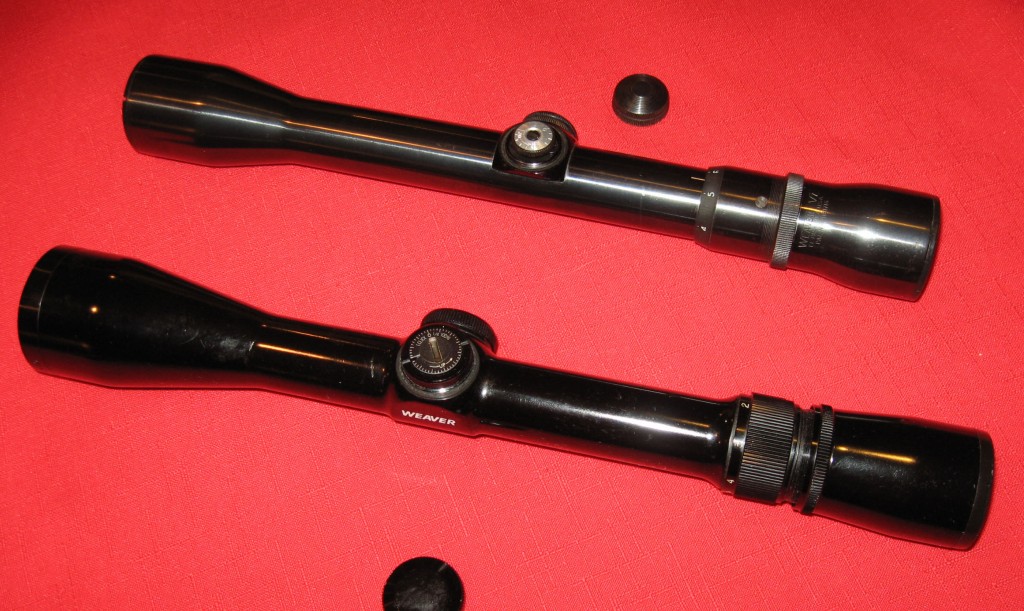 Other, long lasting Weaver lines are the K-series of fixed power scopes and the T-series of target scopes.  The Grand Slam series is a newer series of variable scopes with quality features offered at higher cost.  I have not seen a Grand Slam or the newer Super Slam, but I expect that they offer good value.

This relatively new Weaver series of Chinese manufacture is covered by the company’s Limited Lifetime guarantee, same as other Weaver lines.   Weaver claims the line “provides ballistic precision at bargain prices.”  The prices are not exactly rock bottom, however.  The 4-16X model I chose has a MSRP of $228.95.  The street price, however, is closer to $150.  This allows for one-piece tubes and fully multi-coated lenses.  This all registered well on my frugal meter.  You really wouldn’t want to pay less than this for a variable power scope, regardless of country of manufacture.

Check it out in the picture.  The 4-16X has a 44 mm objective lens, a one-piece aluminum tube with center focus and a matte black finish.  Fairly compact, it has a length of 13” and a weight of 15 ounces.  It has fully multi-coated lenses and is nitrogen purged, features found in all quality rifle scopes.  The general fit and finish seems good. 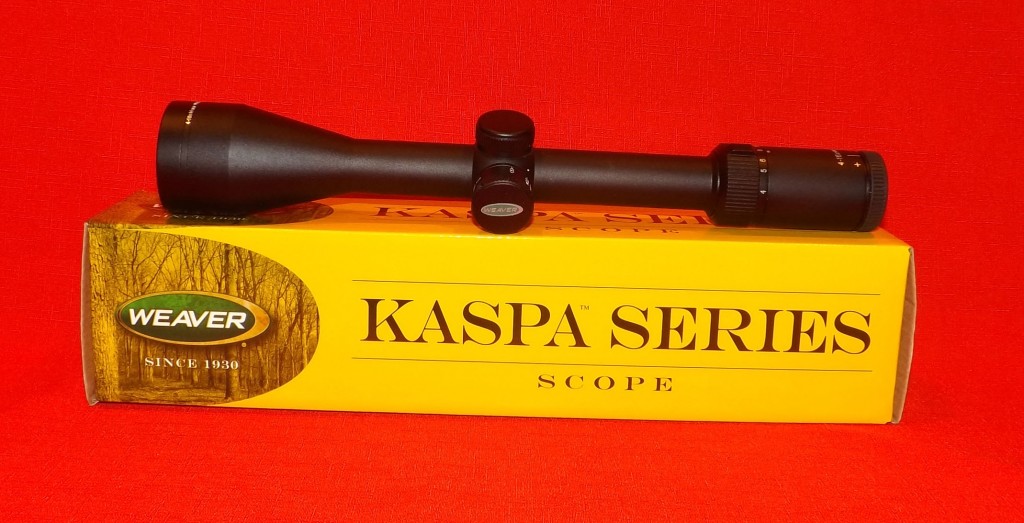 I tried hard, but could find no information on the origin of the “Kaspa” series name.  Not even on Weaver’s web site.  During my search, however, I did find the following definition given by the Urban Dictionary.

“1. Kaspa.  A kaspa is a very sexy, good-looking man with amazing kissing skills and turns  on a lot of women.”

That will do for now.  If you have any info on the origin of “Kaspa,” drop me an email.

The scope was mounted on a Model 1898 Krag-Jorgensen rifle that I had just epoxy bedded and wanted to test for accuracy.  The mounting is accomplished using an S & K mount specifically made for the Krag-Jorgensen. 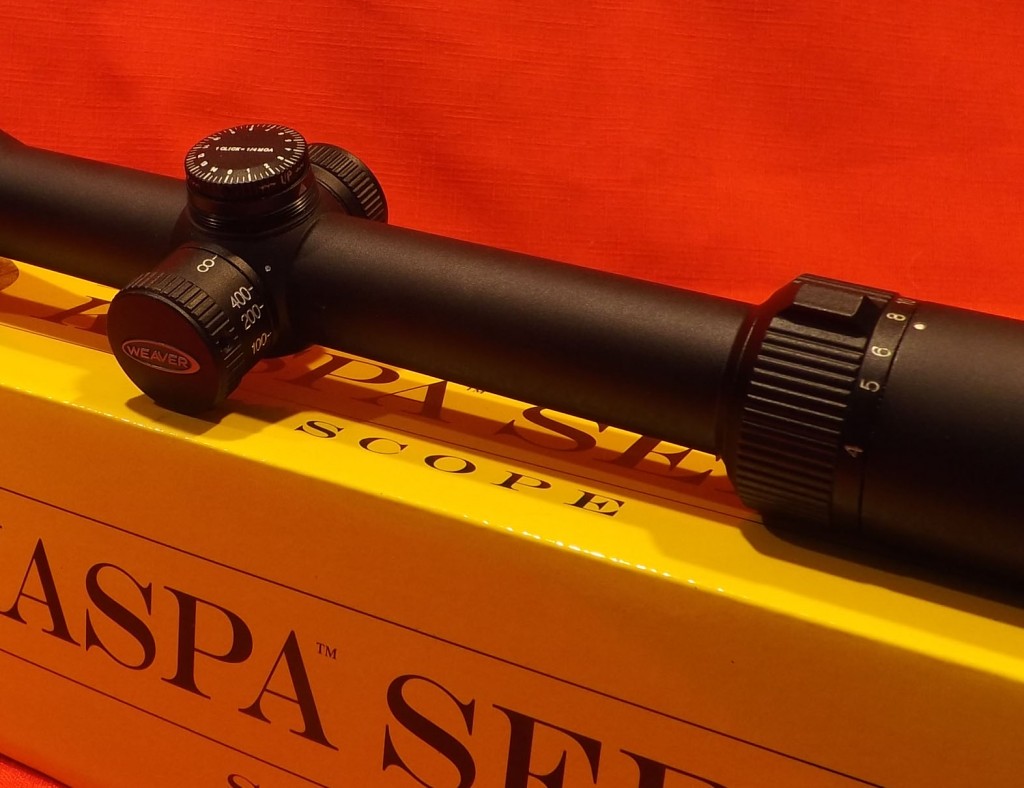 Controls of the KASPA scope

Operation of the adjustments is smooth.  The windage and elevation adjustments, ¼” per click, have clicks you can feel, but they are not crisp.  The center focus works well.  This replaces an adjustable objective lens ring for focus and parallax minimization.  This is the first scope I have had with this feature; it is convenient and I like it.  The magnification ring operates smoothly and has about the right tension for easy adjustability and resistance to change while shooting.  There is a quick diopter adjustment on the eyepiece and it works fine.

The image is bright and clear with a bit of fall off in sharpness at the edges.  The scope has an exceptional amount of eye relief that is maintained throughout its zoom range.  At higher magnifications, it is touchy about eye position, which slows acquisition of the sight picture and makes it a bit harder to maintain. This gets tedious as time goes on in a lengthy range session.

S & K holds the KASPA on the Krag

I used the scope while sending about 50 rounds downrange from the Krag.  It had plenty of windage and elevation adjustment for zeroing, and the shooting results were very consistent.  There were no problems with my target results that indicated any problem with the scope. I was able to shoot several three-shot groups of 0.5” or less at fifty yards. My smallest group measured 0.34” (Which by the way is very good accuracy performance for an ancient military rifle.  I am preparing a separate post on the bedding process and the shooting results.)

So Far So Good

This level of precision is plenty good for the evaluation of accuracy in rifles and handloads. Evaluating a scope, however, is a long term process. A good scope has got to last and I can’t comment on that at this point.  Indications are, however, that the KASPA should be fine for general game and varmint hunting.  Does that mean that it fills a niche at the economical end of the optical spectrum?  I think so.

However, since most of my shooting is precision group shooting to evaluate handloads and accuracy work, I will continue to use scopes of higher quality.