This post looks at firearms history by examining an old copy of the Gun Digest.

The Gun Digest has always been a favorite source for articles covering all aspects of guns and shooting activities and I have always looked forward to the annual appearance of a new edition.  I have a copy of the 18th Anniversary “DeLuxe” 1964 edition, now 50 years old.  Having a look at it may give us some perspective and an idea of how far we have, or have not, come in 50 years.  The Gun Digests of the nineteen sixties have a lot of content and the1964 edition is one of the best volumes of that publication ever to appear.  Looking at something like this is as good as having a time machine.  Note the price of $3.95. 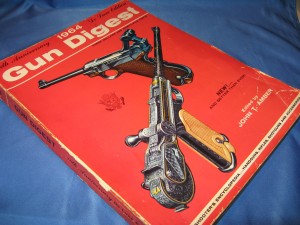 Return with Us Now To Those Thrilling Days of Yesteryear….

“The Lone Ranger Rides Again!”  Well, not really.  The Lone Ranger and other stars of the western TV craze were gone by 1964.  Gunsmoke and Bonanza, however, were still alive and healthy and enjoyed by millions.  If one wished to emulate Marshal Dillon with a Colt Single Action Army .45 with a 7.5-inch barrel like his, the 1964 GD shows that Colt could satisfy that need for a mere $125.00. 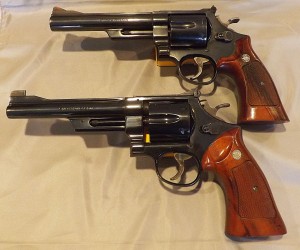 Hunters and other centerfire rifle enthusiasts did not have anything close to the number of choices we have today, but arms of high quality were available.  A Winchester Model 70, just coming to the end of its pre-64 classical phase, could be had for $139.  A Remington Model 700 BDL required about the same outlay of cash.  Those a bit less flush could choose a Savage 110-E for $99.50, or even, gasp!, a Savage Model 340 for $63.95.  Lever action admirers would have to put up only $83.95 for a Winchester Model 94 carbine.

This edition of the GD had 55 useful articles spanning 353 pages.  As usual, there were historical articles, hunting articles, gun tests, and technical articles covering guns and ammo.  The lead article dealt with one of gun history’s miserable failures, the Marlin Model 62 lever action in .256 Winchester Magnum.  Not a bad little cartridge, a .357 Magnum case necked down to .25 caliber, but sales never got off the ground and it was soon gone.

There were two articles covering shooting and hunting with one of gun history’s greatest successes, the Remington’s Model 700 7 mm Magnum, that had been around just a short while in 1964.  One author described taking eland, greater kudu, wildebeest, and impala in Africa.  We all should be so lucky.  The 7 Mil Mag killed the small and medium plains game like lightning.

An article on the Guns of Lewis and Clark describes the armament of the famous expedition, their main shoulder arm for hunting being the Harper’s Ferry .54 caliber flintlock rifle.  They used it to kill the largest game of the west for meat on the trail.  Yes, they also faced the previously unknown grizzly with these flintlocks until they decided it was better to stay out of the mammoth bear’s way.  Other historical articles dealt with the Snider rifle, the Remington 7 mm rolling block, the 9.3 x 72R, and the Peabody sporting rifle, a real potpourri of old iron.

The “Testfire” section, a regular feature of GD editions, tested eight rifles and shotguns, among them a lowly Savage Model 340c .30-30.  Test shooter Ken Waters was freaked out because the rifle repeatedly fired five-shot groups of less than 1.5” at 100 yards!  With only a Weaver K3 scope installed!  As mentioned earlier, the catalog section listed the 340c for $63.95.  You may have read of the Model 340’s admirable qualities in other posts on this site.

My favorite article was “Half-Minute Rifle” by Warren Page.  Page, a very successful gun editor, hunter, and firearms experimenter, was also a champion benchrest shooter.  He wrote many articles in his career and I read a lot of them at the time they appeared.  I liked his breezy, matter-of-fact style.  He wrote with authority, because what he wrote was always based on his personal experience.  One finds a number of articles by Page in the Gun Digest issues of the 1960s and 1970s, and, like many of the good gun writers I read when I was young, he is long deceased.

In this article Page discusses what needs to be done to get a rifle that shoots half-inch groups, or better, at 100 yards.  In his opinion, it has to be a bolt action with a cylindrical steel receiver, because that shape has greatest stiffness.  Then, you have to have a really good barrel, probably a custom, and a very light, crisp trigger and fast lock time.  You could put custom parts together, but if you just wanted to buy a rifle that had a chance at half-inch groups, the Remington Model 40X might do it.  I can’t do justice to this, or any, article in one paragraph, but maybe you get the flavor of it.

Nothing creates nostalgia for a gun nut like looking at what guns cost in the good ol’ days.  All of those lovely Smith & Wessons, Brownings, and Winchesters, I should have bought one of every model, but, of course, I did not.  Like many folks now looking back, I was afflicted with youthful poverty when this stuff, and everything else I would like to have purchased, was available at now seemingly attractive prices.

However, what did catch my eye, and what I did purchase, was a sleek little single-barrel shotgun.  It was a Hawthorne Model 110 single barrel, break-action shotgun with a .410 bore.  The Hawthorne name adorned some guns sold by the Montgomery Ward chain, often known in my neck of the woods as Monkey Ward’s, a direct retail and mail order firm that was actually older than Sears, Roebuck and Co.

I really liked the streamlined looks of this little scattergun, a rather modern design for the time.  Its main feature was that it was hammerless, quite unusual for a single barrel shotgun in that or any other time.  References state that the Hawthornes were made by Savage Arms Co., and Savage sold an identical Model SB100 with the Savage name on it.  Over the years the same gun was sold by other outlets under the Jefferson and Western Field names.  The Hawthorne sold for a bit more than $30.00 in 1964.

This one has never drawn blood, but there was a time when it drew a lot of clay target dust.  I think it might be time this tube had another workout.

Some things, like the Marlin Model 62, are long gone.  Other things, like .410 shotguns and the 7 mm magnums, are still with us, and probably will be for a long time to come.  Nothing we like better has come along. Many good things do seem to last in the shooting sports.

One final observation:  The 1964 Gun Digest has not one article on the AR military style of semi-auto rifle and no such are listed in the catalog section.  Likewise, there are no articles on small, plastic semi-auto pistols or on concealed carry techniques, things you will find so thoroughly covered in more recent publications.

This does not bother me.  Doting on vintage guns as I do, I could live quite comfortably in the shooting world of 1964.  In fact, I do!

Old editions of Gun Digest may sometimes be found at gun shows or listed on eBay.

This entry was posted in Personal History and tagged 1964 Gun Digest, Gun Digest. Bookmark the permalink.