This post describes an Eastern Arms double-barreled, 12-gauge shotgun and gives additional information on guns sold by Sears, Roebuck and Co. in the early twentieth century.  The suitability of using such an arm to hunt waterfowl with non-toxic shot is considered.

I am able to observe the Canada Geese in every season, from nesting time through the winter, and have come to enjoy it immensely.  My feelings are not shared by everyone because a significant increase in the goose population, and their consequent occupation of residential yards and public facilities, causes some people to view them as a nuisance.  Nevertheless I am glad to be in such a place, for the geese are not only interesting to watch, they have things to teach us and are among God’s favored creatures.

ATOTT is in an area in which a few geese are permanent residents.  I understand that non-migratory birds are more common these days in places where the winter is not exceptionally cold and some open water may persist through the season.  So, our area is not a normal breeding area, but every year we have a few nesting pairs near our domicile.

Geese tend to be monogamous and to stay with their mates for the long term.  The female chooses a site near water, makes the nest of grass and reeds in a depression, lines it with down and appropriate stuff, and deposits 2 to 9 eggs.  The pair watches over the nest until the goslings hatch out in a little more than three weeks.  These little yellow-tan fuzz balls are immediately able to walk, swim, and find their own food, but they are family oriented and they will stay with their parents for a long time.  For migratory birds, the young geese stick with ma and pa goose until their return to the nesting area in the following year.

Very shortly after the hatch, we will see the family travelling in single file, one adult in front, one in back, and the goslings perfectly lined up between them.  The lead adult leans its head forward rhythmically, as if to urge the group in the right direction.  I don’t know if the lead is ma or pa goose, or if they trade.  Although males are usually a little bigger than females, they tend to choose mates of similar size, and their marking is very similar so they are a little hard to tell apart.

Sometimes two or three broods hang out together while the goslings are growing.   In 40 – 70 days the young will fledge and begin to fly.  The adults often go through a flightless molting period while this is happening, so they all are then able to zoom through the sky together and will be ready for migration when they want to move.

This sight of the family group steaming quietly by our dock never fails to make me feel humble, for it is a sign that nature is working as it should, and in wondrous ways.  No one takes care of these birds, except in the general sense of human conservation efforts.  They take care of themselves.  They find their own food, grasses and grain, and some aquatic organisms.  They have no health insurance.  They have no unemployment benefits. If one gets weak and is taken by disease or by a bald eagle, that is part of the natural order.  No complaints.  Having progeny and taking care of them is the prime concern.

If you have a suspicion that I really am not an enthusiastic, accomplished goose hunter, I must admit that you are correct, so this writing ought to be seasoned with a grain of salt.  Growing up as I did in the flat, waterless farm country of central Illinois, I did not enter a family tradition of waterfowl hunting.  Rabbits, squirrels, raccoons, pheasants, an occasional bob white, crows, and predator pests were my favorite targets.  Nevertheless, if some geese had put down to feed in our cornfields, I would have been mighty interested.  Today, with good populations of Canadas and generous seasons, I think goose hunting could be very interesting and rewarding.  Best for me, I think, would be a blind with some decoys and a good goose call in a cornfield near a sizable body of water.

The gun I would use would be a family heirloom, a double-barreled, twelve gauge shotgun handed down from my dad.  We got it out on the farm whenever the big medicine was needed.  It is a plain shotgun with 30-inch, fluid steel barrels separated by a grooved rib.  The barrels are probably choked full and full, or full and modified.  It has 2-3/4 inch chambers, double triggers and extractors.

There are few markings.  The name EASTERN ARMS COMPANY appears on the left side of the case-hardened receiver.  Near the breech of the left barrel is found “PROOF TESTED 12 GA.”  There is a serial number on the bottom of the right barrel near the breech and that is all. 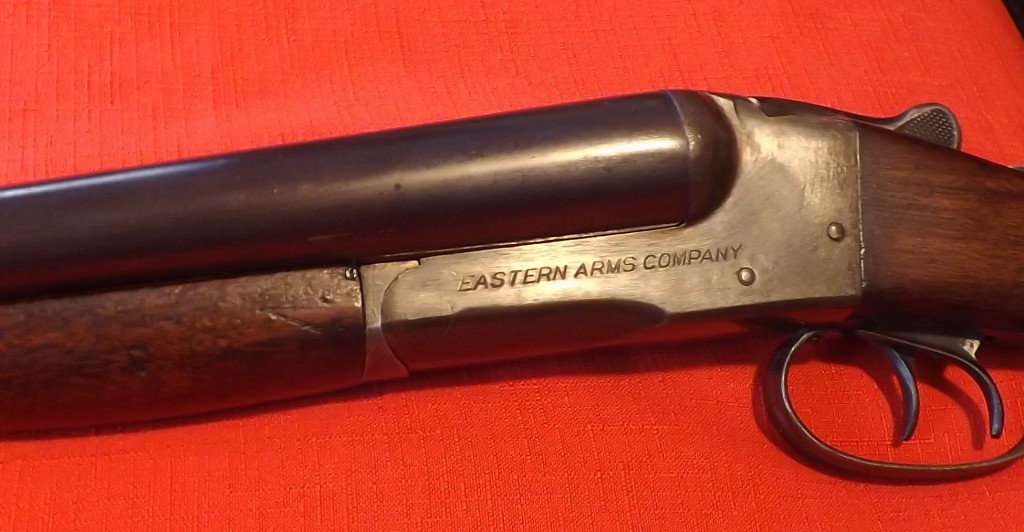 Inscription left side of receiver

This appearance shows that the gun is one of the thousands and thousands of utilitarian shotguns sold by various retail outlets in the first part of the twentieth century.  Research revealed that the Eastern Arms name was used by Sears, Roebuck and Co.  Sears sold a prodigious number of guns under various brand names in stores or by mail order.  Names that you might find on early guns are, T. Barker, Sam Holt, Meriden, Norwich, and A. J. Aubrey, among others.  Later, you will find Eastern Arms, J. C. Higgins, Sears, and Ted Williams.  The guns were generally manufactured by such reputable arms companies as J. Stevens, Savage, Ithaca, High Standard, and Marlin, among others. Quality was therefore good, and, although the buyer may not have known the actual maker of the gun he was purchasing, he trusted Sears’ reputation for value, and prices were lower than any smaller, competitive merchandiser could manage.

A reprint of a 1908 Sears, Roebuck, and Co. catalog of sporting arms is included in the 1964 edition of The Gun Digest. (John T. Amber, Ed., The Gun Digest Co., Chicago, Illinois).  This catalog has 19 pages of shotguns for sale and has hundreds of lines of high-flying prose in praise of the merits of the various models.  Most are side-by-side doubles but there are a few single barrels and pump guns.  There are both hammerless guns and guns with external hammers.  They generally are offered with Damascus barrels.  During this time period external hammers were disappearing and Damascus barrels were being replaced with stronger, fluid steel barrels.  This evolutionary process took some time.  I think the Sears offerings in this catalog give a good picture of what the hunter or farmer of the time wanted.

Further poking around in my firearms references resulted in a positive identification of my gun as being made by J. Stevens of Chicopee Falls, New York.  It is the equivalent of a Stevens Model 330 dating to the 1920s.  I made the identification by visual comparison 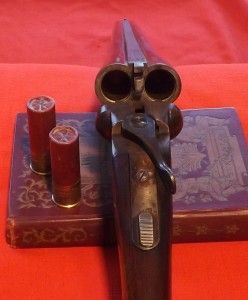 after finding good pictures of a Stevens Model 330 in my copy of the 2013 edition of the Standard Catalog of Firearms (Jerry Lee, Ed., Gun Digest Books, Krause Publications, Iola, Wisconsin).

Stevens was noted for sturdy side-by-side doubles, the later Model 311 probably being the best known among modern sportsmen, so I felt pretty good about this ID. Reasonably up-to-date references value the Model 330 in good condition in the $400 range. More importantly, the gun should be safe with moderate, modern loads and would probably handle loads of 3-3/4 dram 1-1/4 ounce equivalent.  The shells must be limited to 2-3/4” in length.  No 3-inch magnums should be allowed to creep in by mistake.

However, these tempting waters have been greatly muddied by the 1991 outlawing of lead shot for waterfowl hunting.  Everyone agrees that steel shot, the most convenient and economical alternative to lead, should not be used in a gun of this vintage.  It is likely to damage the choke and that would really be sad.  Ammo companies have frantically worked on development of other alternatives and some would appear to be effective and safe to use in a vintage shotgun.  A common feature of all of these alternatives is high expense.  You must expect that you will have to bring your goose down with shells costing several dollars apiece.

A rundown of available, non-toxic shells at this point would make this post even more boring, so I will simply say that Cabela’s web site has a good description of the available alternatives and they sell a lot of them.  Visit there if you are really interested.

For my part, I think the best choice would be the “tungsten matrix” shells loaded by the Kent company.  The shot is fabricated from tungsten powder mixed with plastic.  It has nearly the same density as lead and is soft enough to use in guns that might be harmed by steel.  Kent has a 2-3/4 inch shell that launches 1-1/4 oz. of No. 3 shot.  That should do the trick to at least moderate range.  The cost is $28.37 for 10 shells at Ballistic Products, Inc. (They have a nice web site).  Hoo Boy!  Two shots to check patterning and eight to fetch a couple geese.  Not too bad, I guess. If you would like to load your own, BPI will sell you nontoxic shot, 7 lbs. for $153.90.  Hooo Nellie!

When am I going goose hunting?  I will let you know. 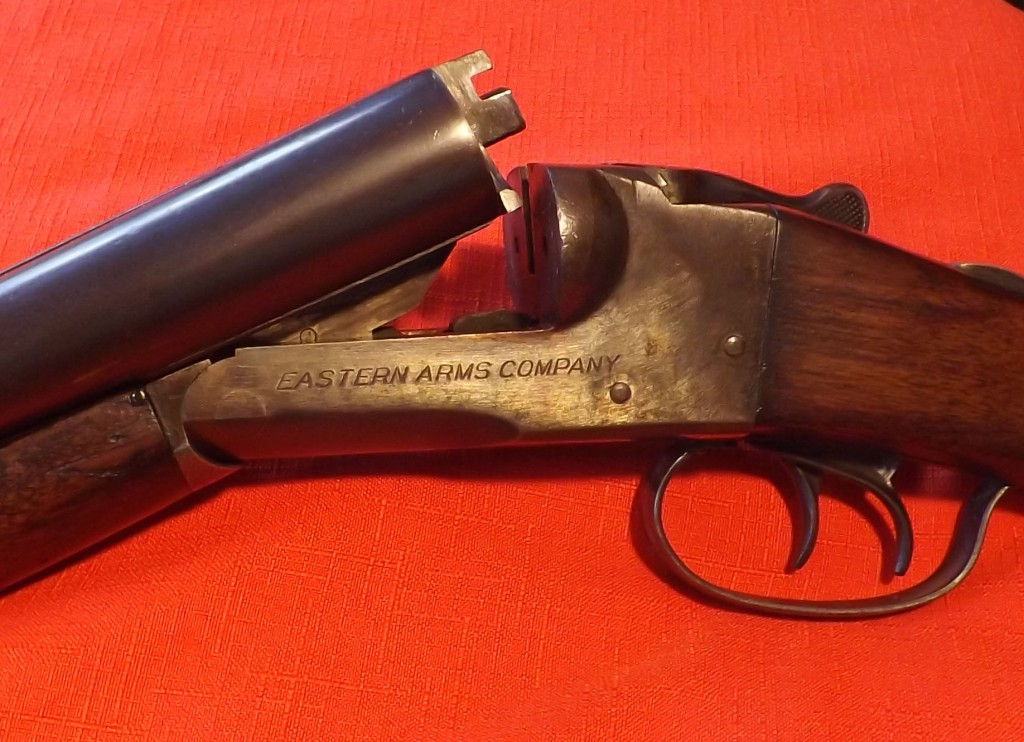